Who doesn't love a city? Lonely Planet has scoured the globe for next year's hottest cities. Our top picks show that a city doesn't need to be a heaving metropolis to get on the list. Then again, sometimes it helps. One of our favourites is the world's largest city that cannot be reached by road. And there are even a couple of European cities that remain criminally underrated. Here they are, Lonely Planet's top 10 cities for next year, ranked in order:

Since 9/11, the site of the World Trade Center's twin towers has stood out as a closed-off, out-of-view, painful gaping void. This year that changes, as the former WTC site finally reopens to the public with the National September 11 Memorial, a 6-acre, tree-filled plaza with 30ft-deep waterfalls at the footprint of the former towers, rimmed by the name of each victim and illuminated at night (its museum will follow in 2012). For the city, this will be more momentous than if the Yankees, Knicks, Rangers and Giants won simultaneous championships while the ball dropped in Times Square on New Year's Eve. For all of New York, 11 September 2011 will be a defining moment.

From its extraordinary position perched on the northwestern-most tip of Africa, Tangier looks in two directions: one face towards Spain and Europe, and the other into Africa. The 'white city' announces a culture excitingly different from that of its close cousins across the water. With the recent arrival of a new city governor, the town beach now sparkles, the hustlers are off the streets and even the taxi drivers are polite. A stylish new Tangier is being created with a dynamic arts community, renovated buildings, great shopping and chic new restaurants.

Tel Aviv is the total flipside of Jerusalem, a modern Sin City on the sea rather than an ancient Holy City on a hill. Hedonism is the one religion that unites its inhabitants. There are more bars than synagogues, God is a DJ and everyone's body is a temple. Yet, scratch underneath the surface and Tel Aviv, or TLV, reveals itself as a truly diverse 21st-century Mediterranean hub. By far the most international city in Israel, Tel Aviv is also home to a large gay community, a kind of San Francisco in the Middle East. Thanks to its university and museums, it is also the greenhouse for Israel's growing art, film and music scenes.

Wellington is Cool-with-a-capital-C, crammed with more bars, cafes and restaurants per capita than New York, and a slew of gourmet producers including some 10 independent coffee roasteries. Year-round you'll find arts and cultural events in abundance. Likewise, its film industry, 'Wellywood', centred on the Miramar Peninsula, is booming thanks in large part to the success of Wellingtonian Sir Peter Jackson (executive producer of the 2011 and 2012 Hobbit movies currently being made here). This little capital will be front-and-centre on the world stage in 2011 when New Zealand hosts the Rugby World Cup.

Valencia sits coquettishly and again confidently along Spain's Mediterranean coast. For centuries, it was overshadowed by larger Spanish cities – hard-nosed, commercially-minded Barcelona and Madrid, the nation's capital. Not any more. While retaining its provincial charm, Spain's third city now mixes with the international crowd. Host of a couple of America's Cup yachting jamborees and an annual street circuit Formula 1 motor race, it's also European Capital of Sport for 2011 and a favourite destination for conferences and congresses. Valencia enjoyed its golden age two full centuries before the rest of Spain.

After days forging by boat along rainforest-fringed rivers, Iquitos, mighty megalopolis of the Peruvian Amazon, comes as a shock to the system. Pulsating with life, the city's latest boom is tourism: visitors may flock to reconnoitre the rainforest but taking time to imbibe Iquitos itself is imperative too. This is a sultry slice of Amazon life: Brazilian, Colombian, indigenous and expat. Clubs bounce to salsa and rock until the early hours with the vigour you'd expect of Peru's jungle capital, but Iquitos is also a cultural hub: expect works by Peru's top artists, opulent rubber-boom mansions and a museum on Amazon ethnography for starters. As a trading post for rainforest tribes, market mayhem and riverboat bustle are part of the package, all conspiring to fill the city with an addictive, round-the-clock energy.

Here's a secret within a secret: Ghent might just be the best European city you've never thought of visiting, in a country that continues to be criminally overlooked. Ghent hides away in the middle of Belgium's big three – Brussels, Bruges and Antwerp. Most Belgium-bound visitors rushing between these see nothing more than the stately fortifications of Ghent's St Pieter's Station. Those who do hop off the train and stroll along the Leie River to the historic centre will have their eyes out on stalks. Here hides one of Europe's finest panoramas of water, spires and centuries-old grand houses. But this is no place to simply kick back: Ghent has one of Europe's most dynamic festival scenes, which vies for visitors' attention. This year the entire centre will emerge from a major program of rebuilding designed to show off the huge pedestrianised squares.

The great metropolis of Delhi, encompassing Old and New Delhi and sprawling out for miles, has not looked this smart and sparkling in centuries. Huge preparations for the Commonwealth Games, which took place in October 2010, improved the city's infrastructure, cleaned up its streets and added to its accommodation options. Aside from, of course, a bounty of new or improved sporting facilities, there's the marvellous artery of the Metro – an underground transport system that's a futuristic, egalitarian world away from the sometimes chaotic, class-ridden situation above ground. This year marks 100 years since New Delhi was founded in 1911. At least eight cities are known to have been founded on this spot. The commemoration of this anniversary is sure to be a colourful and lively affair.

Is it Australia's most underrated city? Anyone surprised to see Newcastle on the list of 2011's hottest cities (and there's a few of you, right?) probably hasn't pulled in off the Pacific Highway, or at least not for a while. Newcastle flies under the radar of Aussies and international travellers in part because it's overshadowed by its bigger, bolder and better-known sibling, Sydney, 150km south. But, at around one-tenth the size, Australia's second-oldest city has Sydney-like assets: surf beaches, a sun-drenched subtropical climate, and diverse dining, nightlife and arts. Not only is Newcastle ideally located just two hours by road or rail or 30 minutes by plane or seaplane from Sydney, it's less than an hour's drive west to the Hunter Valley wineries, south to sailboat-filled Lake Macquarie, north to whale-watching and sharkfeeding at Port Stephens and to sandboarding at Stockton Beach (the southern end of the 32km-long beach is a five-minute ferry ride across Newcastle's harbour).

If Chiang Mai were a person, it would be Bob Dylan. With a history dating back further than anyone can remember, its influence remains enormous. And despite its great age, there's still a bohemian chic that makes it as relevant and hip as ever. Culture capital of Thailand, Chiang Mai was once the heart of the Lanna kingdom. Today those wanting to flee the bustle of Bangkok visit to lounge in coffee shops and drink in the city's artisanal atmosphere. With a friendly, cosmopolitan feel, this is one easy, safe and pleasant place to explore. There are dozens of well-preserved temples here, too. Many new ecotours and adventure trips are appearing, and with a choice of river rafting, elephant rides, trekking and off-road cycling, even the biggest adrenaline junkie will be sated. 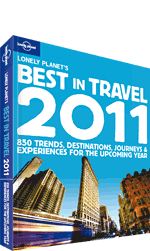 Planning travel in 2011? Start with Lonely Planet's Best in Travel.