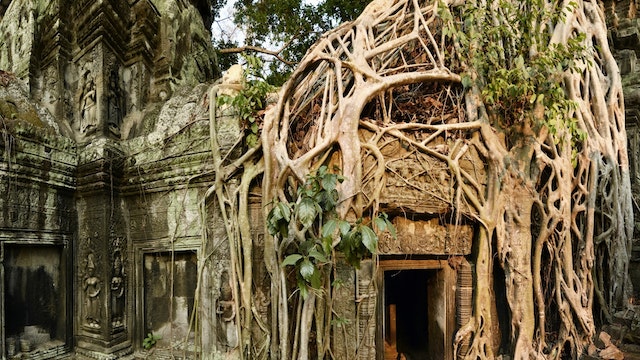 The so-called 'Tomb Raider Temple', Ta Prohm is cloaked in dappled shadow, its crumbling towers and walls locked in the slow muscular embrace of vast root systems. Undoubtedly the most atmospheric ruin at Angkor, Ta Prohm should be high on the hit list of every visitor. Its appeal lies in the fact that, unlike the other monuments of Angkor, it has been swallowed by the jungle, and looks very much the way most of the monuments of Angkor appeared when European explorers first stumbled upon them.

Well, that’s the theory, but in fact the jungle is pegged back and only the largest trees are left in place, making it manicured rather than raw like Beng Mealea. Still, a visit to Ta Prohm is a unique, other-worldly experience. There is a poetic cycle to this venerable ruin, with humanity first conquering nature to rapidly create, and nature once again conquering humanity to slowly destroy. If Angkor Wat is testimony to the genius of the ancient Khmers, Ta Prohm reminds us equally of the awesome fecundity and power of the jungle.

Built from 1186 and originally known as Rajavihara (Monastery of the King), Ta Prohm was a Buddhist temple dedicated to the mother of Jayavarman VII. It is one of the few temples in the Angkor region where an inscription provides information about the temple’s dependents and inhabitants. Almost 80,000 people were required to maintain or attend at the temple, among them more than 2700 officials and 615 dancers.

Ta Prohm is a temple of towers, closed courtyards and narrow corridors. Many of the corridors are impassable, clogged with jumbled piles of delicately carved stone blocks dislodged by the roots of long-decayed trees. Bas-reliefs on bulging walls are carpeted with lichen, moss and creeping plants, and shrubs sprout from the roofs of monumental porches. Trees, hundreds of years old, tower overhead, their leaves filtering the sunlight and casting a greenish pall over the whole scene.

The most popular of the many strangulating root formations is the one on the inside of the easternmost gopura (entrance pavilion) of the central enclosure, nicknamed the Crocodile Tree. One of the most famous spots in Ta Prohm is the so-called Tomb Raider tree, where Angelina Jolie’s Lara Croft picked a jasmine flower before falling through the earth into…Pinewood Studios.

It used to be possible to climb onto the damaged galleries, but this is now prohibited, to protect both temple and visitor. Many of these precariously balanced stones weigh a tonne or more and would do some serious damage if they came down. Ta Prohm is currently under stabilisation and restoration by an Indian team of archaeologists working with their Cambodian counterparts.

The temple is at its most impressive early in the day. Allow as much as two hours to visit, especially if you want to explore the maze-like corridors and iconic tree roots.