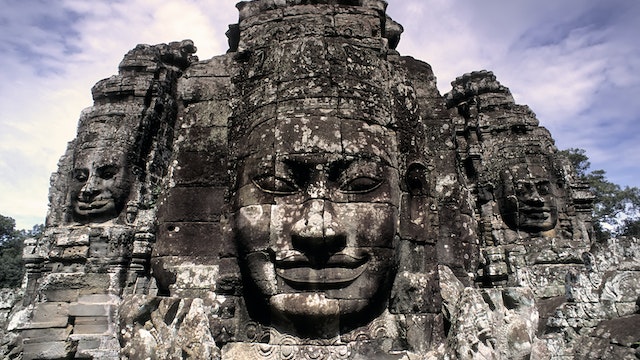 At the heart of Angkor Thom is the 12th-century Bayon, the mesmerising, if slightly mind-bending, state temple of Jayavarman VII. It epitomises the creative genius and inflated ego of Cambodia’s most celebrated king. Its 54 Gothic towers are decorated with 216 gargantuan smiling faces of Avalokiteshvara, and it is adorned with 1.2km of extraordinary bas-reliefs incorporating more than 11,000 figures.

The upper level of Bayon was closed for restoration when we visited and is not scheduled to reopen until 2022.

However, the lower levels, including the epic bas-reliefs, will remain open throughout the restoration. The temple's eastward orientation leads most people to visit in the morning, though, Bayon looks equally good around late afternoon.

Unique, even among its cherished contemporaries, the architectural audacity was a definitive political statement about the change from Hinduism to Mahayana Buddhism. Known as the 'face temple' thanks to its iconic visages, these huge heads glare down from every angle, exuding power and control with a hint of humanity. This was precisely the blend required to hold sway over such a vast empire, ensuring the disparate and far-flung population yielded to Jayavarman VII's magnanimous will. As you walk around, a dozen or more of the heads are visible at any one time, full face or in profile, sometimes level with your eyes, sometimes staring down from on high.

Though Bayon is now known to have been built by Jayavarman VII, for many years its origins were unknown. Shrouded in dense jungle, it also took researchers some time to realise that it stands in the exact centre of the city of Angkor Thom. There is still much mystery associated with Bayon – such as its exact function and symbolism – and this seems only appropriate for a monument whose signature is an enigmatic smiling face.

Unlike Angkor Wat, which looks impressive from all angles, Bayon looks rather like a glorified pile of rubble from a distance. It’s only when you enter the temple and make your way up to the third level that its magic becomes apparent.

The basic structure of Bayon comprises a simple three levels, which correspond more or less to three distinct phases of building. This is because Jayavarman VII began construction of this temple at an advanced age, so he was never confident it would be completed. Each time one phase was completed, he moved on to the next. The first two levels are square and adorned with bas-reliefs. They lead up to a third, circular level, with the towers and their faces.

Some say that the Khmer empire was divided into 54 provinces at the time of Bayon’s construction, hence the 54 pairs of all-seeing eyes keeping watch on the kingdom’s outlying subjects.

Moving in a clockwise direction from just south of the east gate you'll encounter your first bas-relief, Chams on the Run, a three-level panorama. On the first tier, Khmer soldiers march off to battle – check out the elephants and the ox-carts, which are almost exactly like those still used in Cambodia today. The second tier depicts coffins being carried back from the battlefield. In the centre of the third tier, Jayavarman VII, shaded by parasols, is shown on horseback followed by legions of concubines (to the left).

Moving on, the first panel north of the southeastern corner shows Hindus praying to a linga (phallic symbol). This image was probably originally a Buddha, later modified by a Hindu king.

The Naval Battle panel has some of the best-carved reliefs. The scenes depict a naval battle between the Khmers and the Chams (the latter with head coverings), and everyday life around the Tonlé Sap lake, where the battle was fought. Look for images of people picking lice from each other’s hair, of hunters and, towards the western end of the panel, a woman giving birth.

In the Chams Vanquished, scenes from daily life are featured while the battle between the Khmers and the Chams takes place on the shore of Tonlé Sap lake, where the Chams are soundly thrashed. Scenes include two people playing chess, a cockfight and women selling fish in the market. The scenes of meals being prepared and served are in celebration of the Khmer victory.

The most western relief of the south gallery, depicting a Military Procession, is unfinished, as is the panel showing elephants being led down from the mountains. Brahmans have been chased up two trees by tigers.

The next panel depicts scenes that some scholars maintain is a Civil War. Groups of people, some armed, confront each other, and the violence escalates until elephants and warriors join the melee.

Just north of the Civil War panel, the fighting continues on a smaller scale in the All-Seeing King. An antelope is being swallowed by a gargantuan fish; among the smaller fish is a prawn, under which an inscription proclaims that the king will seek out those in hiding.

The next panel depicts a procession that includes the king (carrying a bow). Presumably it is a Victory Parade.

At the western corner of the northern wall is a Khmer circus. A strongman holds three dwarfs, and a man on his back is spinning a wheel with his feet; above is a group of tightrope walkers. To the right of the circus, the royal court watches from a terrace, below which is a procession of animals. Some of the reliefs in this section remain unfinished.

In A Land of Plenty, two rivers – one next to the doorpost and the other a few metres to the right – are teeming with fish.

On the lowest level of the unfinished three-tiered Chams Defeat, the Cham armies are being defeated and expelled from the Khmer kingdom. The next two panels depict the Cham Armies Advancing, and the badly deteriorated panel shows the Chams (on the left) chasing the Khmers.

The Sacking of Angkor shows the war of 1177, when the Khmers were defeated by the Chams, and Angkor was pillaged. The wounded Khmer king is being lowered from the back of an elephant and a wounded Khmer general is being carried on a hammock suspended from a pole. Directly above, despairing Khmers are getting drunk. The Chams (on the right) are in hot pursuit of their vanquished enemy.

The next panel, the Chams Enter Angkor, depicts a meeting of the Khmer and Cham armies. Notice the flag bearers among the Cham troops (on the right). The Chams were defeated in the war, which ended in 1181, as depicted on the first panel in the sequence.