10 of the world's most amazing train journeys

There’s something magical about a journey by train. Sometimes the magic is inside – on a train you can meet people, and eat and sleep with the sound of steel wheel swishing on steel rail beneath you. Sometimes the magic is outside, in the landscape the train traverses – an adventure, an experience, an insight into the heart of a nation.

Where will the magic take you? Be inspired to see the world by train with these incredible trips from our title, Amazing Train Journeys

Some railways rattle through historic cities; others swoosh beside spectacular coastline. A few have an epic history, and one or two are remarkable for the colorful characters onboard. The Reunification Express line, also known as the North–South Railway, fulfills all these criteria. One of Southeast Asia’s best-loved railways, its fortunes have waxed and waned with those of the country it traverses. Traveling more than a thousand miles from Ho Chi Minh City in the south to Hanoi in the north, there is no more atmospheric way to haul into Vietnam’s twin metropolises. And there’s no better way of exploring all the glories in between.

For soaking up the scenic grandeur of the North American continent, nothing compares with Amtrak’s California Zephyr train. This classic three-day journey travels nearly 2500 miles (4000km) across prairies, deserts, the Rocky Mountains and the Sierra Nevada on its way from Chicago to San Francisco.

The scenery is magnificent throughout – especially when seen through the floor-to-ceiling windows of the lounge car – but if you can only do one section, opt for the riveting 185-mile (298km) stretch between Denver and Glenwood Springs, where the train travels through an often roadless wilderness of deep, narrow gorges near the Colorado River’s headwaters.

Here’s a question that would confound even ardent railway anoraks. Which line runs through more than 2500 miles (4320km) of Siberian wilderness, connects remote settlements where temperatures sink to -60°C (-76°F) in winter and was envisaged as the greatest construction project in the history of the Soviet Union? The Trans-Siberian? Nope, it’s the Baikal–Amur Mainline, better known as the BAM – the rogue sibling of the infinitely more famous railway to the south. Built the better part of a century after the Trans-Sib, the BAM is colder, remoter and traverses scenery that is every bit as spectacular, but its rails are traveled by barely any tourists.

Traversing the Altiplano, from the shores of Lake Titicaca to the beating heart of the Inca capital, the railway from Puno to Cuzco cuts a ponderous but picturesque path through the snow-dusted peaks and voluptuous valleys of the Andes. Between drinks in the bar and enjoying entertainment and fine food in the restaurant, passengers aboard Perurail’s Lake Titicaca train can ogle the vista from an open-air observatory car, as they rumble across the epic Peruvian plains, passing hardy bowler-hatted llama farmers and traveling through remote towns and villages.

The Bĕijīng to Lhasa Express, China

Linking the futuristic architecture and imperial wonders of Bĕijīng with the dreamlike monasteries and palaces of Lhasa, the Z21 train transports its passengers from the neon lights of urban China to a once-remote land of magenta-robed monks, where the air is heady with the aroma of incense and yak-butter candles. As it chugs westward the train climbs nearly 16,400ft (5000m) on its journey to the roof of the world: the Tibetan plateau, where it glides past grazing yaks, fluttering prayer flags, snow-capped mountains and boundless blue skies. Onboard, passengers slurp noodles and play cards with their bunkmates.

London to Fort William on the Caledonian Sleeper, UK

Segueing from the sooty suburbs and crowded concrete-lined cul-de-sacs of central London to the crisp air and soaring vistas of the Scottish Highlands via one overnight train journey epitomizes the romance of rail travel. It’s just a pity the whole experience – from buffet-car banter and single malt nightcaps, to being lulled into la-la land by the rhythm of the rails and waking to bedside views of towering granite peaks – feels like it’s over in a flash. Though it may be short, especially when compared to some of the other overland odysseys on this list, the Caledonian is surely Britain's best train ride.

This astonishing train is one of the wonders of 19th-century railway building, and yet outside Norway hardly anyone knows about it. In just over six hours and 300 miles (490km) of travel, it covers the spectrum of Norway’s natural splendor: climbing canyons, crossing rivers, burrowing through mountainsides and traversing barren icescapes. All aboard for the Bergensbanen: a mainline into Norwegian nature.

Where to find myth and legend in Norway's wildest landscapes

In fewer than five hours, the journey renowned as one the world’s finest and most scenic one-day train rides spans very distinct microclimates in the South Island of New Zealand. Commence the TranzAlpine experience in Christchurch, before speeding along the Canterbury Plains and climbing quickly through the snow-capped mountains of the Southern Alps. After traversing some of the country’s more remote alpine scenery, descend through a thrilling tunnel to emerge among the lakes, streams and rainforests of the South Island’s West Coast. From there, more superb coastal and alpine scenery is on tap for independent travelers.

On a continent where taking things slowly is compulsory, it won’t come as much of a surprise the 46-hour journey along the 1160-mile (1860km) route from Tanzania’s port city to New Kapiri Mposhi in Zambia often ends up taking far longer. Then again, few trains in the world offer the chance – and we should point out that it’s a chance rather than a guarantee – of spotting big game from your seat, but the Tazara (Tanzania and Zambia Railway Authority) does exactly that. For many, the highlight is neither the scenery nor the wildlife, though; it is the chance to spend two days watching everyday life out of the window, and enjoying the clamor and chaos when the train pulls to a halt, scheduled or unscheduled.

You might also like:
This luxury train lets you see the Rocky Mountains in a whole new way
Travel between Colorado and Utah in a glass-domed train
10 national parks in the US you can reach by train

This article was first published August 2019 and updated January 2022 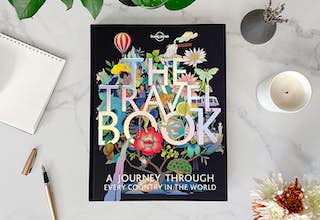 Buy the latest edition of The Travel Book
View all stories