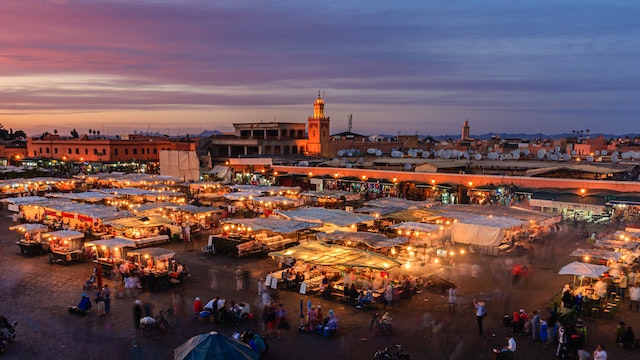 Roll up, roll up for the greatest show on earth. Everywhere you look in Djemaa El Fna, Marrakesh’s main square (pronounced "jema" – the "d" is silent), you’ll discover drama in progress. The hoopla and halqa (street theater) have been non-stop here since the 11th century. Until a few decades ago, it hosted a daily food market for mountain traders. Now the whine of snake-charmer pungi flutes hits full throttle by mid-morning, and the show doesn't really kick off until sunset when restaurants fire up their grills, cueing musicians to tune up their instruments.

Djemaa El Fna sprang into life in the 11th century, around the time that the city of Marrakesh was founded by the Almoravids. Historians and locals will argue over whether the square got its name from the fact that public executions were likely held here: one translation is "assembly of the dead." Another translation is "mosque of the dead," which could be a nod to the partial collapse of neighboring Koutoubia Mosque in the 18th century, burying worshippers inside.

For centuries, Djemaa El Fna square was used as a giant food market, with traders flooding down from the mountains to set up under canvas tents each day. Early photos of this era can be seen in Maison de la Photographie. The present boundaries of the square were imposed by the French, as all the buildings surrounding the Djemaa were erected during the protectorate era.

Unesco declared Djemaa El Fna a Masterpiece of World Heritage in 2001 for bringing urban legends and oral history to life nightly, and although the storytellers who once performed here have since given way to communal games, musical performers, and slapstick comedy acts, Djemaa's nightly carnival continues to dazzle. Amazigh musicians strike up the music and gnaoua troupes sing while henna tattoo artists beckon to passersby, and water-sellers in fringed hats clang brass cups together, hoping to drive people to drink. This is a show you don't want to miss, and it's a bargain too: applause and a few dirhams ensure an encore.

The square's many eclectic exhibitions are not without a darker side, though; you are likely to see monkeys dressed up and led around on chains for entertainment, and some of the practices of the plaza's snake charmers are ethically questionable to say the least.

Djemaa El Fna has been a protected urban landmark since 1922 and Unesco-inscribed since 2001 as a place of unique cultural exchange. Yet Unesco has flagged the square as a space under "serious threat" from urbanization and cultural assimilation.

For centuries, Djemaa has been a stage for gnaoua dance troupes, whispering fortune tellers, cartwheeling acrobats and, above all, hikayat (storytellers). Today, the last of the storytellers have gone and with them many of the square's traditional performers. Djemaa is still the throbbing heart of the medina, but like its inhabitants, it's moved with the times. Live music and local food are its 21st-century trademarks.

Stroll Djemaa as it wakes up to catch the plaza at its least frenetic. At this point, the stage is almost empty. Orange-juice vendors are first on the scene, along with the snake charmers and their baskets of cobras. Eager dentists, potion sellers and henna-tattoo artists start setting up makeshift stalls under sunshades.

Cars are banned from the square after 2pm, and local food stalls start setting up for the nightly dinner scrum around 4pm. At sunset, Djemaa finds its daily mojo as Amazigh (Berber) troupes and gnaoua musicians start tuning up and locals pour into the square. The hullabaloo doesn’t knock off for the night until around 1am. To view it from a different perspective, head to one of the rooftop cafes ringing the square.

Spicy snail broth, skewered hearts, bubbling tajines, flash-fried fish: the Djemaa food stalls are a heaving one-stop shop for Moroccan culinary specialities, and they're not to be missed. Despite alarmist warnings, your stomach should be fine. Clean your hands before eating, use bread instead of utensils and stick to filtered water.

Stalls have numbered spots and are set up on a grid. The snail chefs are in a line on the eastern side. For fried fish and calamari, pull up a pew at stall 14. Look for a lovely woman named Aicha who runs stall 1 in the southwestern corner for brochettes (kebabs), tajines and harira (a cheap, hearty soup made of tomatoes, onions, saffron and coriander with lentils and chickpeas).

After dinner, join locals at the row of copper tea urns on the southern edge of the stalls. The speciality here is warming ginger tea called khoudenjal with cinnamon, mace and cardamom, served with a dense, sticky and similarly spicy scoop of cake. A pit stop at No 71 Chez Mohammed's is the perfect way to round out your meal.

Where to stay near Djemaa El Fna

Marrakesh's biggest concentration of budget hotels is in this area, most only a stone's throw from Djemaa El Fna, along Rue Sidi Bouloukat and Rue de la Recette (easy walking distance from both the airport bus and taxi drop-off points). Upmarket riad accommodation is found off Rue Riad Zitoun El Jedid to the southeast.

Where to eat near Djemaa El Fna

Fancy some snail broth? Want to sample mechoui (slow-roasted lamb) or Marrakesh's famed tangy "bachelor's stew" tanjia? Djemaa El Fna and the area directly around it is the best place for adventurous foodies to get stuck in. South of the main square, there are more high-end options. For serious munching, follow your nose to Hadj Mustapha, a basic canteen that dishes up some of the best tanjia in town.

How to get to Djemaa El Fna

Djemaa El Fna is on the edge of the Marrakesh medina, the ancient walled part of the city. It's a 20-minute walk from Bab Doukkala in the northwest or 15 minutes from Place des Ferblantiers in the south. From central Gueliz, take Bus 1 or 16.