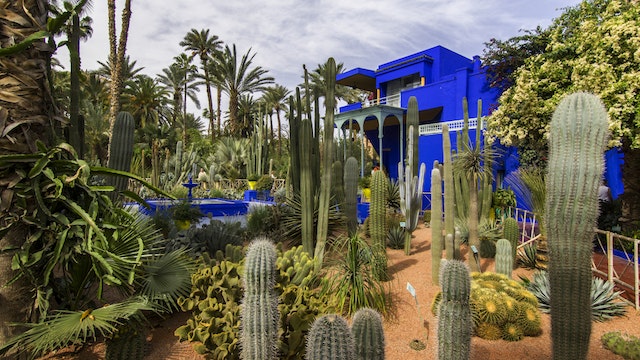 French fashion designer Yves Saint Laurent and his partner Pierre Bergé bought Jardin Majorelle in 1980 to preserve the vision of its original owner, French landscape painter Jacques Majorelle, and keep it open to the public. The garden, started in 1924, contains a psychedelic desert mirage of 300 plant species from five continents. At its heart lies Majorelle's electric-blue art deco studio, home to the Musée Berbère, which showcases the rich panorama of Morocco's indigenous inhabitants through displays of some 600 artifacts.

In recent years, the site has become incredibly popular, and it now ranks as Morocco's most visited tourist attraction, with around 900,000 visitors a year. It's far from the peaceful oasis it was a decade ago, but it's still an extremely stylish place with magical gardens, art deco architecture and an excellent museum. To add more space for the huge number of visitors, the YSL Foundation expanded the gardens in December 2018 by opening up the section containing Villa Oasis, where Bergé lived until his death in 2017.

All areas of Jardin Majorelle are wheelchair and stroller accessible.

How to get tickets for Jardin Majorelle

As Morocco's most popular tourist attraction, the line to get into Jardin Majorelle can be long. In peak season, expect to wait 15 minutes to an hour to get in. For your best chance of immediate entry, arrive before 10am, and ideally for opening at 8am.

Tickets can now be purchased online, which is highly recommended for faster entry. Visit Friday to Monday when tickets include entry to the Villa Oasis gardens, which are a highlight. Don’t scrimp the extra Dh30 ($3.35) and miss the Musée Berbère; it's well worth the cost.

An afternoon visit is the best time for keen photographers because it captures the prettiest light.

Musée Yves Saint Laurent, opened in 2017, is next door to the gardens, and combined tickets can be bought for both attractions. Plan to spent the best part of a day between the two.

In 1923, Majorelle decided to put down roots in Marrakesh and bought a 4-acre palm grove on the edge of the medina, planted with poplars that gave his home its original name, Bou Saf Saf (meaning "the poplars" in Arabic). The first dwelling built here was Moorish in style, with a traditional adobe tower. It wasn’t until 1931, after Majorelle had extended the plot to almost 10 acres, that he hired French architect Paul Sinoir to design a villa and studio in the art deco style.

The building that has become Instagram-famous (now housing the Musée Berbère) was Majorelle’s studio and workshop. The main house, where Majorelle and then Yves Saint Laurent and his partner Pierre Bergé lived, was renamed Villa Oasis by YSL. It remained a private residence until Bergé’s death in 2017.

Who was Jacques Majorelle?

Although famed for its tenure as the home of Yves Saint Laurent, it was Jacques Majorelle (1886–1962) who gifted the gardens to Marrakesh. He was a French painter from Nancy whose father, Louis Majorelle, was a celebrated art nouveau furniture designer. It was partly Majorelle's exposure to the art nouveau movement – rich with organic motifs – that cemented his lifelong passion for plants and animals. Majorelle arrived in Morocco in 1917 and was quickly bewitched by the same colors and vibrant street life in Marrakesh that seduced YSL half a century later.

Majorelle became known for his Orientalist paintings of North Africa and particularly Morocco – some of the repro 1920s travel posters for sale around the medina are his work. The striking cobalt blue of the buildings at Jardin Majorelle are an original feature conceived by Majorelle himself, inspired by the bold Moroccan skies, the shade of blue in traditional Moroccan tiles and the head-turning blue veils of the Tuareg people in the southern Sahara. The color became known as "Majorelle Blue" and was even trademarked as such.

The gardens are home to more than 300 plant species from five continents, mostly collected by Jacques Majorelle over several decades of globetrotting. The gardens were first opened to the public in 1947 but were abandoned after his death until Yves Saint Laurent and Pierre Bergé made it their mission to save them from property developers.

Aspiring botanists will be in heaven, but Jardin Majorelle is a wonderful space to explore whether you’re a plant super fan or not. Regular signage includes useful illustrations to help visitors identify everything from Mexican agave to Chinese windmill palms and North African date palms, though it could be more helpful if common names were labeled as well as scientific names.

Dense thickets of bamboo stretch as high as desert towers, flecked with strong shards of sunlight. Jardin Majorelle’s exotic bamboo groves are well known and well loved, but what you might not expect is the immense volume of graffiti. For years, tourists have shown their affection for the site by thoughtlessly etching their initials into the gardens’ signature stalks and even into some of the giant succulents. Not only has this environmental graffiti become an eyesore, but the gardens’ botanists have realised that it is damaging the plants. Carving into the plants is now forbidden.

Majorelle’s electric-blue art deco studio houses the fabulous Musée Berbère, which showcases the rich panorama of Morocco’s indigenous inhabitants in displays of some 600 artifacts, including wood and metalwork, textiles and a room of regional traditional costumes displayed with the flair of a catwalk show. Best of all is the brilliant mirrored chamber displaying a collection of chiseled, filigreed and enameled jewels.

In December 2018, the Villa Oasis gardens opened to the public for the first time. Accessed via a pathway draped with bright bougainvillea and distinct from the main gardens, they are arguably the more sumptuous and engrossing of the two and have greatly enhanced the visitor appeal of the complex.

The residence itself is larger than the studio and more Oriental in design, mixing Marrakesh’s signature terracotta red with Majorelle’s electric blue and Islamic green on its facade and tiled pyramid roof. The bamboo groves of the main garden give way to giant succulents, cacti and mature palms. There’s also a succession of calm-inducing water features filled with koi carp, noisy frogs and lily pads, the largest of which pools around a white-pillared pavilion.

The Villa Oasis house isn’t open to the general public (only a handful of very high-end hotels are allowed to run exclusive tours here), so you might just have to imagine the sumptuousness of its interiors. The salon is a masterpiece of Moroccan craftsmanship with elaborate painted cedarwood, magnificent zellige (colorful geometric tilework) and museum-quality art deco furniture.

One of the most popular spots in the garden is the memorial. You’ll find it along the back wall on the opposite side of the gardens to the entrance/exit. If you can block out the photographers and Instagrammers, it’s a poignant space. The memorial is an ancient Roman pillar, which Yves Saint Laurent and Pierre Bergé found on a beach in Tangier. Bergé, who was both Yves Saint Laurent’s business partner and life partner, was added to the memorial after his death in Provence, France, in 2017.

Where to stay near Jardin Majorelle

Where to eat near Jardin Majorelle

Inside the gardens, the former servants' quarters house Café Majorelle, a lovely, leafy spot for tea or cake. Just outside the entrance of Jardin Majorelle, MyKawa serves salads, sandwiches and Moroccan breakfasts with a dash of Mediterranean style.

How to get to Jardin Majorelle

Bus No 12 from Bab Doukkala heads past Jardin Majorelle. If you want to walk, it's a 10-minute stroll from Bab Doukkala. Head up Avenue Moulay Abdullah and then turn right onto Ave Yacoub El Mansour.

Taxi drivers who hang out around Jardin Majorelle are renowned for overcharging. Walk away and hail a taxi off the main road instead.