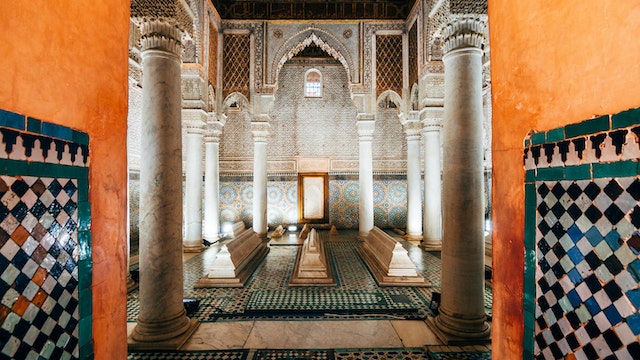 Saadian Sultan Ahmed Al Mansour Ed Dahbi was just as extravagant in death as he was in life. After the "golden king" built Badia Palace in the 16th century, he transformed an existing necropolis into this lavish tomb complex, sparing no expense and importing Italian Carrara marble and gilding honeycomb muqarnas (decorative plasterwork) with pure gold. Al Mansour died in splendour in 1603, but a few decades later, Alaouite Sultan Moulay Ismail walled up the Saadian Tombs to keep his predecessors out of sight and mind. The mausoleum lay forgotten until aerial photography exposed it in 1917.

Chamber of the 12 Pillars

The tomb complex's main chamber is to the left of the site entrance – just look for the line of people. At the time of writing, it could only be admired through an arched viewing door, though plans are afoot to build a viewing platform circling the chamber to help ease congestion.

Elaborate zellige (geometric tilework) and gilded honeycomb muqarnas abound in this hall, which gets its name from the fact that its cupola ceiling is supported by three groups of four pillars of marble. Two of these columns are noticeably older – plundered loot from the ancient Roman city of Volubilis. This chamber, the most luxurious part of the tomb, is the final resting place of Al Mansour and his sons.

Surrounding the central Chamber of 12 Pillars are two other tomb rooms. Alpha princes were buried in the Chamber of the Three Niches, while the room to the left was originally a prayer room, though it later became a secondary tomb for favored members of the royal court. The intricately carved, pentagon-shaped feature in the back wall is the mihrab (prayer niche indicating the direction of Mecca).

In the courtyard cemetery, the secondary mausoleum was erected by an earlier sultan in 1557 and predates the rest of the tomb complex. Carved with blessings and vigilantly guarded by stray cats and the odd tortoise, the tomb was embellished by Al Mansour who claimed it for his mother, Lalla Massouda. Hers is the singular tomb recessed in a niche at the back of the mausoleum; the rest belong to other important women of the court.

Next to this structure you can still see the original main entrance to the tombs, blocked up by Moulay Ismail and never reopened. Accessible for centuries only through a small passage in the Kasbah Mosque, the tombs were neglected by all except the storks until the French discovered them and built the alleyway in the southwestern corner through which visitors now enter.

Not an alpha prince during Al Mansour’s reign? Then you were relegated to the garden plot along with royal household members and some 170 chancellors. Rumor has it that one of these tombs belongs to the sultan's most trusted Jewish adviser – see if you can spy one that looks subtly different to the rest.

Tips for visiting the Saadian Tombs

Where to stay near the Saadian Tombs

The Saadian Tombs are located in the Kasbah area of the Marrakesh medina. This area is less popular than Mouassine and Djemaa El Fna for accommodations, but the neighborhood can actually be a far more pleasant option because it's a little quieter and tourists receive less hassle here than in the northern souqs (markets).

Where to eat near the Saadian Tombs

Conveniently just across the road from the entrance to the Saadian Tombs, Kasbah Café is a top spot to recharge your sightseeing batteries. For camel burgers, date milkshakes and a fun, friendly vibe, head down Rue de la Kasbah to Cafe Clock.

How to get to the Saadian Tombs

Rue de la Kasbah is outside the entrance to the Saadian Tombs, so it's easy for taxis to drop off passengers. If you're walking, follow the main roads heading west from Place des Ferblantiers until the Kasbah Mosque turnoff.

The entrance to the Saadian Tombs is unmarked. Walk to the southern end of the Kasbah Mosque, with the Kasbah Café directly across the road, and head down the skinny alleyway.