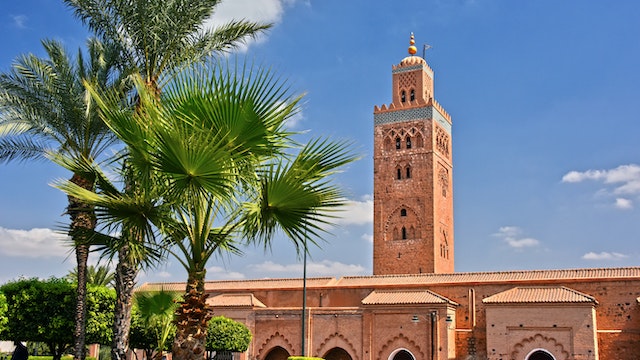 Five times a day, one voice rises above the din of Djemaa El Fna as the muezzin calls the faithful to prayer from the Koutoubia Mosque. The mosque's minaret has been standing guard over the old city since the Almohads erected it in the 12th century. Today it's Marrakesh's most famous landmark. The tower is a monumental cheat sheet of Moorish ornament: scalloped keystone arches, jagged merlon crenelations and mathematically pleasing proportions.

They say imitation is the greatest compliment, and the 12th-century 250ft-high minaret has quite the reputation as an architectural muse. It’s the prototype for the Giralda in Seville, Spain, and Le Tour Hassan in Rabat, the capital of Morocco. Unlike Middle Eastern mosques, which have domed minarets, the Koutoubia's square design is an Amazigh trademark.

There are no stairs inside the minaret, only a ramp that the muezzin would have once ridden up on horseback to give the call to prayer.

The Koutoubia Mosque minaret is topped by a spire of brass balls. Once made from gold, local legend tells that the balls were "gifted" to the mosque by the wife of Almohad sultan Yacoub Al Mansour, who melted down her jewelry as punishment after being spotted eating during Ramadan fasting hours.

Today, the balls are filled with special mineral salt from the High Atlas Mountains, which includes nitrate and magnesium that prevents the spire from oxidizing. The salt is changed once a year, during Ramadan, to maintain the golden glint. In front of the spire, the wooden stick points towards Mecca (all mosques in the Marrakesh medina have this feature) and is also used to bear flags on religious holidays.

Another Marrakshi legend tells that the pious Almohads had the original mosque felled halfway through building because it wasn’t properly aligned with Mecca. Exact dates of construction are murky.

On the northwestern side of the Koutoubia Mosque minaret are the ruins of the original prayer hall. One story goes that it collapsed during the massive 1755 Lisbon earthquake, killing hundreds of people as it crumbled. Research suggests this could be plausible. To the north of the Koutoubia minaret, the original doorway still stands. On the far wall of the ruins the remains of the arches that would have held up the ceiling are visible. The stumps on the floor are the hall's columns, and they stay in situ as a memorial.

In Arabic, djemaa means congregation as well as gathering, and one theory is that the true translation of Djemaa El Fna, the famous square in Marrakesh that's near Koutoubia Mosque, is not "assembly of the dead," but "mosque of the dead," a legacy of the tragic event that occurred here.

In the 19th century, as many as 100 booksellers clustered around the Koutoubia Mosque's base – hence the name, from kutubiyyin (meaning booksellers in Arabic). Before that time, it was simply called the Almohad Mosque, after its founders.

Stretching out behind the Koutoubia Mosque, the palm-tree-dotted green swath of Koutoubia Gardens is a favorite Marrakshi spot for strolling, relaxing on park benches and generally taking a quiet break. If you need some downtime after dodging motorbikes amid the medina's skinny alleyways, take the locals' lead and head here for a peaceful meander. Koutoubia Gardens are one of the best parks in Marrakesh, and there are great views of the Koutoubia Mosque's minaret.

Non-Muslims can’t go inside the Koutoubia Mosque or minaret but are most likely to get a glimpse inside on a Friday when the doors are open for prayers. The best spot from which to photograph the Koutoubia's minaret – framed by old stone and date palms – is under the archway to the left of the main entrance.

Where to stay near Koutoubia Mosque

Koutoubia Mosque is just outside of the Marrakesh medina walls, a short walk from Djemaa El Fna square. Marrakesh's biggest concentration of budget hotels is in this area, most only a stone's throw from the square, along Rue Sidi Bouloukat and Rue de la Recette (easy walking distance from both the airport bus and taxi drop-off points). Upmarket riad accommodation is found off Rue Riad Zitoun El Jedid.

Where to eat near Koutoubia Mosque

Refuel with a sugar fix at Pâtisserie des Princes, lauded for its pastries (though the ice cream is delicious too). For a refreshing mint tea with a view of the Koutoubia Mosque minaret, head across the road to lovely old-fashioned Café El Koutoubia.

How to get to Koutoubia Mosque

Bus 16 from the Gueliz neighborhood drops you directly opposite the mosque. Koutoubia Mosque is a one-minute stroll west of Djemaa El Fna, and a 25-minute walk from Gueliz, straight down Avenue Mohammed V.