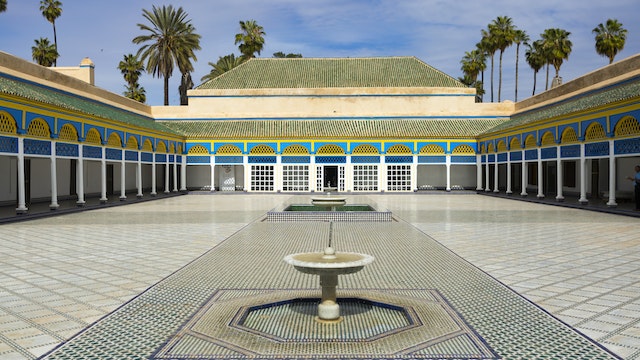 La Bahia (The Beautiful) is an 8000-sq-metre, floor-to-ceiling extravagance of intricate marquetry, plasterwork and zouak (painted wood), and certainly one of Marrakesh's most eye-popping sights.

The salons of both the Petit Riad and Grand Riad host intricate marquetry and zouak ceilings, but the Cour d'Honneur, a grand courtyard, with its 1500 sq metre floor of Italian Carrara marble, is the undisputed highlight.

Despite the vast area on show, only a portion of the palace’s eight hectares and 150 rooms is open to the public. Its grand spaces sometimes play host to important cultural events.

Built by Grand Vizier Si Moussa in the 1860s, the palace was later expanded and embellished from 1894 to 1900 by his son and successor Abu ‘Bou’ Ahmed. The Cour d'Honneur (courtyard) was converted into a harem by Bou Ahmed after he became Grand Vizier in 1894. Indeed, the expansion and beautification of Bahia Palace was driven by Bou Ahmed's desire to accommodate his four wives and 24 concubines.

Bou Ahmed died in 1900, and in 1908 the palace's beguiling charms attracted warlord Pasha Glaoui, who claimed it as a suitable venue to entertain French guests. They, in turn, were so impressed that they booted out their host in 1912, installing the protectorate’s resident-general in his place.

When Morocco gained independence from France in 1956, the palace was used as a royal residence, until King Hassan II transferred it to the custody of the Moroccan Ministry of Culture, so the building could serve as a cultural icon and tourist attraction.

Closest to the entrance, the single-storey Petit Riad is similar in layout and size to traditional houses of the medina, but it's notable for the ornamentation of its salons. Its walls of intensely elaborate white plasterwork are inscribed with verses from the Quran. In the 19th century when it was originally decorated, this plaster would have been carved in situ while wet – just imagine the artisan skill required to work so swiftly and accurately.

Sandwiched between the Petit Riad and the Grand Riad, you'll pass through two courtyards. The first is relatively plain, but the second, called the Grand Cour or Cour d'Honneur, is the undisputed heart of the palace and one of the most spectacular open spaces ever to be conceived in Morocco. It is 1500 sq metres in size and was restored to its original brilliance in 2018. The floor is a vast expanse of Italian Carrara marble, encircled by a gallery uniquely coloured with bright blue and yellow plaster and woodwork.

Step through the doorway from the Cour d'Honneur into the large courtyard of the Grand Riad, studded with fountains and lush foliage and sound-tracked by birdsong. This is the oldest part of the palace complex, completed in 1867 by Si Moussa, a former slave who rose through the ranks to become one of Sultan Hassan I's most important aides. The riad's salon is bedecked with carved wood lintels, zouak artistry and stained-glass detailing – Bahia Palace was thought to be the first building in North Africa to use stained glass as a decorative feature.

Entrance fees are Dh70 for adults and Dh30 for children. Aim to arrive early to dodge the large tour groups that regularly descend on the building.