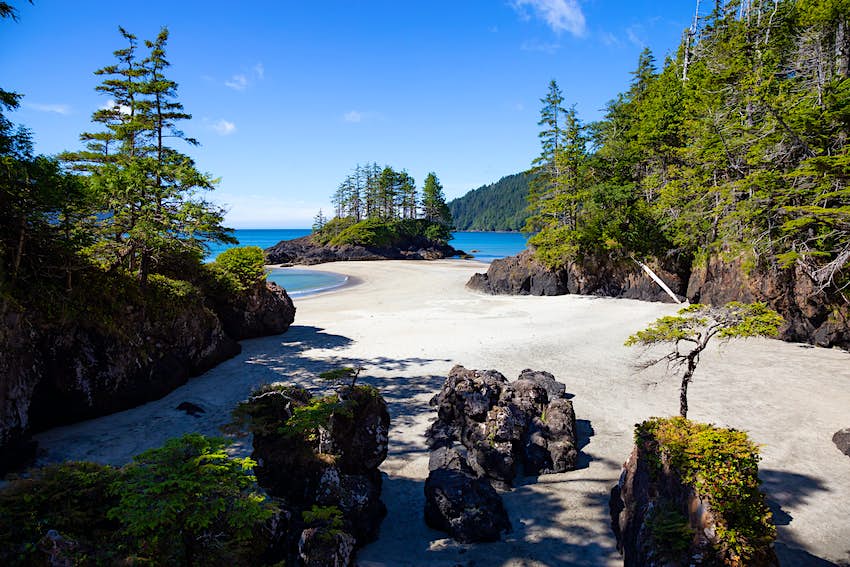 In Canada, a visit to the beach doesn’t just mean ice cream, chilling out in the sun, and a bracing dip in the ocean. If you’re lucky, it might also include a bear encounter, a windswept walk amid driftwood, and a chance to lob a snowball rather than a pebble into the surf.

Depending on where you are, the incoming tide won’t necessarily destroy your sandcastles. With only six of Canada’s 13 provinces and territories enjoying ice-free access to open ocean, many of the nation’s sandiest beaches abut large freshwater lakes.

Editor's note: During COVID-19, please check the latest travel restrictions before planning any trip and always follow government health advice. Events may be subject to change.

With a reputation for tempestuous weather and tricky access, northern Vancouver Island excels in wild lonesome beaches. The 1.6-mile (2.5km) trail to San Josef Bay starts at the end of a 43-mile (70km) unpaved logging road from Port Hardy.

When the forest finally parts, you’ll be delivered onto a windswept expanse of crashing surf and forested sea stacks where bushes and trees have been contorted by fierce Pacific storms. Bring a tent and binoculars. You can camp right on the smooth sandy beach and the "bins" will enhance your appreciation of the resident wildlife including eagles and ospreys.

Best beach for avoiding the crowds

The huge, dune-rimmed beach at Stanhope on the north shore of Prince Edward Island sees far fewer tourists than its immediate neighbors. For a quiet ramble, free of bustle and bounding dogs, head to the boardwalk that traverses the park's marram-grass dunes, an important nesting site for the piping plover.

Continue west and you’ll encounter the Covehead Harbour Lighthouse, a white clapboard structure that exudes a diminutive PEI charm. Track east, and you’ll end up at Dalvay by The Sea, a handsome Queen Anne revival style hotel built in 1895.

Canada might not plug its beaches like its national parks or cosmopolitan cities, but it can legitimately claim to possess the longest freshwater beach in the world. Wasaga Beach, in the Ontario town of the same name, is a 8.7-mile-long (14km) expanse of soft sand that kisses the shores of Georgian Bay in Lake Huron. This is the closest full-fledged beach resort to Toronto and thousands of visitors pile in every summer when the elongated strip can get rowdy.

Notwithstanding, the beach is part of a provincial park meaning it’s equipped with trails, park naturalists and opportunities to spot owls and woodpeckers. The well-used sand is split into six zones. Areas one and two are the most heavily trafficked, five is best for families, six suits social distancers. All have warm, shallow water that’s safe for swimming.

Choosing your favorite beach in Canada’s surfing capital, Tofino, is like choosing your favorite deluxe sports car. They’re all ridiculously good. Most surveys list Long Beach at No. 1 because it’s, well, long; but many Tofitians (locals) rank the surfer’s hub of Chesterman as the most complete scimitar of sand.

Unlike Long Beach, Chesterman is close enough to town to reach by bike (with your surfboard clipped to a special bike-rack) and firm enough to cycle on if you need some leg exercise before cresting the Pacific waves. Ringed by rock-pools, islets and a narrow sand spit, it’s beautiful in both early morning mist and fiery orange-ripple sunset. The surfing, of course, is sublime.

With the warmest sea water in Canada and International Blue Flag certification proclaiming its safety, accessibility, and environmental credentials, Parlee is far and away New Brunswick’s finest ribbon of sand. The beach is soft and golden and the water shallow and positively balmy. In high summer, lifeguards patrol at all hours making it a favorite among families.

Commercialization is kept to a minimum with grassy dunes buffering a manicured strip of showers, change rooms, and poutine-plying eating joints. Locals in the know, save their appetites for the nearby lobster capital of Shediac. The Beach Boys once played a concert at Parlee adding to the beach’s carefree rock n roll spirit.

Kitsilano is arguably Vancouver’s (and Canada’s) best urban beach, a freewheeling nugget of Southern California chopped off and transported one thousand miles north. Backed by cool cafes and an attractive park, Kits exudes a sporty, laid-back vibe, especially in summer.

Beach volleyball is the game of choice although there are also enough grassy expanses to spread out and toss a frisbee or football. The yellow arc of sand is sugary and clean with views across the water toward Vancouver’s glass skyscrapers and the North Shore mountains opposite. If swimming in boat-filled English Bay doesn’t entice you, Kits also has an enormous nearly 450ft-long (137m) saltwater pool, one of the largest of its kind in the world.

The bay is shallow, the beach is long, and the sunsets are spectacular. This gentle swathe of sand protected within the boundary of Gros Morne National Park on Newfoundland has a mellow Caribbean feel, until you dip your toes in the 59ºF (15ºC) waters of the Gulf of St Lawrence.

Kayaking is a popular activity here. You can cast off from the beach and navigate the sheltered waters of Belldowns Island where arctic terns nest before undertaking their marathon migration south. Whales can sometimes be spotted out at sea and, when the weather turns chilly, beachside paths turn into cross-country skiing trails.

Landlocked Alberta relies on its lakes to entertain summer beach seekers. While the province has plenty of watery escapes to lure the sand-starved, few are as perfect as tiny Annette Lake in Jasper National Park with its forested shoreline, gothic mountain backdrop and invigoratingly cold glacial waters.

Short and narrow, Annette’s nodule of sand is barely the length of a frisbee throw, but herein lie other quirks. This is one of those rare beaches where you might want to pack some bear spray alongside your blow-up raft: grizzlies are sometimes spotted in the area. Elk and mule deer provide more innocuous company.

Administratively, the Îles de la Madeleine archipelago is in Québec; geographically it’s way closer to the Maritimes. Possessing an astounding 217 miles (350km) of beaches juxtaposed with iron-rich red cliffs, its pièce de la résistance is this 6-mile (10km) sweep of pale sand on the Anglophone island of Grosse Île.

Extending northeast from Pointe Old Harry into the wetlands of the 1690-acre (684 hectares) East Point National Wildlife Reserve, Grande Échouerie invites hours of uninterrupted meditation amid tufted dunes frequented by horned grebe and piping plover. The archipelago’s stiff winds make it one of the best places in Canada for kitesurfing or, for the less athletically inclined, kite-flying.

The two most popular, Outlet and Lakeshore, face west onto the main body of Lake Ontario. A little quieter and a lot more interesting is Dunes Beach that abuts the cleaner, calmer waters of sheltered West Lake. Here, giant dunes dotted with trees and bushes rise steeply out of the lake. While most beaches invite sloth, Dunes tempts you to indulge in short sharp hill climbs before tumbling full pelt back down into the lake.

Juneteenth celebrations around the USA

How to plan a round-the-world trip