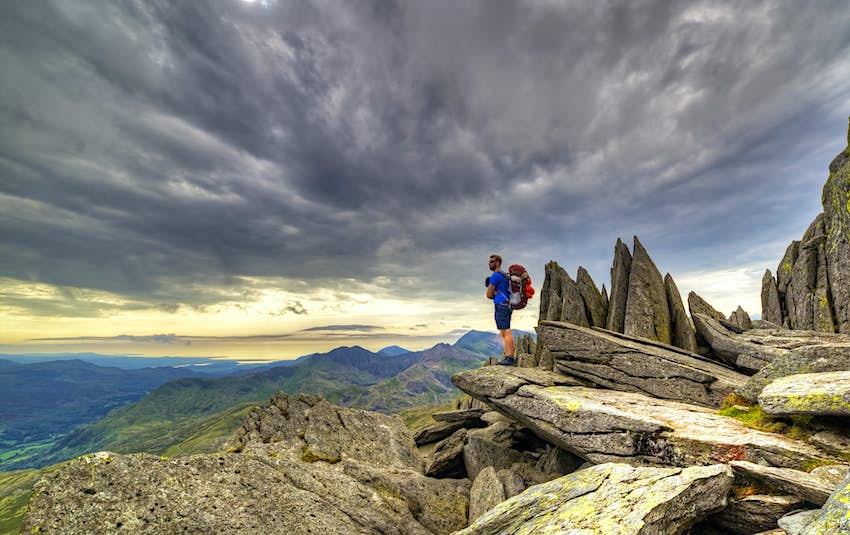 Whether it’s the sense of achievement or a side effect of the lack of oxygen, there’s something life-affirming about standing atop a lofty peak, gazing down from the roof of the world. But why do so many travelers stick to the world’s most famous peaks when there are scores of great summits out there that are often more accessible, equally rewarding and far less well-trodden?

So forget Kili and Fuji and plot a course for one of these superb lesser-known peaks – from a celebrated literary summit in England to a Chinese climb steeped in spiritual significance – that almost anyone can conquer.

Warm clothes, good footwear and reasonable fitness are still essential. A sense of adventure and a head for heights will certainly come in handy, but you can leave the ice-axe and crampons on the shelf. Travel restrictions are still in place for some destinations during the COVID-19 pandemic, so be sure to check the latest safety guidance carefully before departure.

Easily accessed from the lovely Ullswater villages of Patterdale and Glenridding, England’s third-highest peak provides a special mountain experience where even novice climbers can stand proudly atop a summit and still make it back to the pub in time for a celebratory fireside pint.

Helvellyn’s most famous approach, Striding Edge, provides a steep knife-edge scramble that’ll get the pulse racing, while the less popular Swirral Edge offers a softer ascent through scree and boulders. From the top, it’s said that on a clear day it’s possible to see from Scotland to Wales. Pause here to ponder a moment, in the style of Samuel Taylor Coleridge and William Wordsworth (both former summiteers), before heading back down to the pub via St Sunday Crag.

Suitable for: A peak you can scale in a day
Height: 950m
Trekking season: Spring to autumn. Winter is reserved for classical mountaineering instruction. Climbers should be wary of changing weather conditions throughout the year.
Getting there: Bus 508 (Ullswater) from Penrith railway station services both Patterdale and Glenridding. Trains from Glasgow, London Euston and Manchester Airport stop at Penrith.

Austrians know exactly what you need after a long day on a mountain – a warm bed, hearty meal and some traditional folk-singing! The mountains of Northern Styria are dotted with alpine hüttes that facilitate multi-day hikes, and Schiestlhaus, a short distance from the Hochschwab summit, is arguably the nicest of the lot.

Initially constructed in 1884, the lodge stands in a saddle near the cliff face and boasts astonishing panoramic views from its outdoor decking. Though the journey to the hut – via a long leafy track through pine meadows and a set of near-vertical chains at Das G’hackte – may leave you longing for bed, the spectacular vistas, traditional Austrian singing and a liberal serving of schnapps make for a more memorable antidote to mountain fatigue.

Best for: A memorable overnight stay
Height: 2277m
Trekking season: Spring to autumn with ski touring in winter.
Getting there: The closest international airports are Vienna and Graz, and intercity trains between the two cities stop at Bruck An Der Mur. From Bruck, take Regional Bus 171 to Thörl where you’ll need to grab a taxi to the trailhead at Bodenbauer.

A pilgrimage to the summit of Éméi Shān, the highest of China’s Four Sacred Buddhist Mountains, is said to forgive all sins. Whether it’s the promise of a clean slate, the mountain’s biodiversity or its smattering of atmospheric ancient monasteries, roughly 300,000 transgressors make the journey to the summit each year (though most now zip to the top in cable cars).

A Zen mindset helps to deal with countless stone steps, suffocating crowds, pushy hawkers and marauding monkeys; but it’s all part of the unique experience. Rise early, take the paths less traveled, and sleep at least two nights in monasteries. The sunrise above the clouds is spectacular. Note that the real summit is Wanfo Si, about a 45-minute hike from the tourist summit of Jinding Si (3077m).

Best for: A spiritual experience
Height: 3099m
Trekking season: All year, though avoid public holidays. Spring and autumn are popular. Summer (July/August) is monsoon time, while in winter ice can make the stone steps treacherous.
Getting there: Fly into Chengdu then board a high-speed train to Emeishan station, where you will need to transfer to a bus to arrive at the temple complex. Alternatively, alight at Leshan and visit the Great Buddha, from where buses depart directly for Bàoguó, the bottom temple.

Stow away your lens cap, as you’ll be shooting almost continuously on this mammoth climb up one of the Canadian Rockies most photogenic peaks. With a vertical altitude gain of 1690m, Mount Temple’s South West Ridge is the highest non-technical route in the Rockies that can be scaled in a long, heart-thumping day by any experienced walker – though it often takes longer thanks to the myriad viewpoints that demand at least a moment's appreciation.

Starting at Moraine Lake, climbers ascend through thick forest to Sentinel Pass where expansive views reveal the surrounding peaks, including the sheer face of neighboring Mt Pinnacle. From here, hikers push on, tackling a series of steep scree slopes, switchbacks and several short but taxing rock scrambles to the final summit slope. It's here the already staggering views turn spectacular as mountains, glaciers and rugged valleys spread out below in a panorama of raw geography.

Best for: Picture-perfect views
Height: 3543m
Trekking season: July–August, after the snow has melted. Beware of rockfall from above and consider taking a helmet.
Getting there: Banff can be reached by bus from Calgary, the nearest international airport, or more scenically on the Rocky Mountaineer Train from Vancouver. Shuttle buses run from Banff Railway Station to Lake Louise village or you can hire a car. In Lake Louise, you’ll have to hunt around for a lift to the trailhead at Moraine Lake.

With wild rivers, sprawling button-grass plains and perhaps even a supposedly extinct tiger or two, Tasmania’s Southwest National Park is the heart of the country’s wild interior, and Mount Anne looms large as its most prominent peak. The brave can tackle this imposing mountain in one day, though it’s more enjoyable, and easier, to camp overnight along the route.

Befitting the surrounds, the trek takes in a kaleidoscope of terrains. From the car park, a boardwalk leads to an easy two-hour climb to High Camp Memorial Hut just inside the tree line – don't miss the dramatic panorama of Lake Pedder. Climb through a boulder maze onto Mt Eliza – where the views are even better – before traversing an exposed high plateau amidst groves of pandani, patches of cushion plants and yet more boulders, to the base of Mt Anne's summit cliffs. A breezy but straightforward scramble winds up through dolerite columns to the summit cairn, where awe-striking views of the vast, enveloping countryside await.

Best for: A walk on the wild side
Height: 1423m
Trekking season: November to May has the best weather (though climbers should be wary of changing weather conditions).
Getting there: There is no public transport. Hire a car from Hobart Airport and drive 1½ hours to Maydena, the last village before the South West National Park. Continue another 30km then turn left onto the unsealed Scotts Peak Dam Rd, where 12 miles (19km) of dust brings you to the Condominium Creek car park and trailhead.

Two main factors will endear Snowdon, Wales’s highest peak, to younger walkers. The first is inspirational: the mountain is associated with the fantastical legends of King Arthur – the fabled king is said to have killed a fearsome giant who once lived on the mountain (reputedly still buried at the summit!). The second is logistical: it’s possible to catch a train back down from the top (and give tired legs a rest).

Yes, an age-old railway line crawls (from spring to autumn) to the 1085m summit of Snowdon, but hikers who choose to take on the walk are looking at a day-long, five- to six-hour hike to the top. Walking the Ranger Path – named after John Morton "the Snowdon Ranger" who guided Victorian visitors to the peak via this trail – is a good route to try with little walkers, following a rocky, gradually ascending path up the eastern slopes before merging with two other routes for the push to the summit. Views over the rolling hills and mountain lakes of Snowdonia National Park spur on worn-down walkers, as does the prospect of sampling a traditional Welsh oggie (lamb and leek pasty) from the summit-top cafe (closed until May 2021) – another of the mountain’s unique quirks.

Best for: Climbing with kids
Height: 1085m
Trekking season: It's possible to climb Snowdon year-round, but the railway closes during winter. The summit-top cafe is closed until May 2021.
Getting there: The most convenient train stations for Snowdon are Bangor, which has a direct service from many major cities, including London Euston, Cardiff and Liverpool, and Betws-y-coed, which also has good connections (though sometimes requires a change in Llandudno). From both, buses run to Llanberis, which is near the trail start point.

Iranians have a deep love for the outdoors, emphasised by the presence of mountaineering clubs in most major cities. Alvand Kuh, an outlier summit that forms part of the Zagros Mountains in Western Iran, is one of the country’s more popular peaks for hiking – and for good reason.

The trek to the top can be completed in one long day, but it’s more fun to overnight with the locals at one of the mountain shelters, where, as a foreigner, you will be an instant celebrity – expect endless food swapping, selfies and glasses of sweet chay (tea). The route starts from Ganjnameh and ascends to the Mishin Plateau, where the shelters are found, before a track through a spring-fed alpine meadow and boulder field snakes its way to the summit. Anyone fretting about finding their way should consider climbing during the weekend when plenty of local hikers will happily point you in the right direction.

Best for: A cultural exchange
Height: 3580m
Trekking season: Spring to fall.
Getting there: Most international travellers will arrive in Tehran. From there you have the option of taking the train, express buses (five hours) or an internal flight to Hamadan.

Nyiragongo, Democratic Republic of the Congo

Any traveler who feels reaching a new summit is not sufficiently adventurous should consider an ascent of Nyiragongo, an active volcano situated in a country which itself remains off-the-beaten-path due to its chequered history. But, for those who relish a real challenge, the sight of the stratovolcano rising dramatically above the city of Goma, wheezing plumes of molten smoke into the sky, will make the potential dangers and hassles involved worth it.

Leaving the Virunga National Park ranger station at Kibati outside of Goma, the 8km route to the top ascends 1500m through tropical rainforest up to razor-sharp volcanic rocks on the crater rim where there’s an array of simple cabins. The climb takes 4-6 hours and you could easily return in a day but most people overnight, for it’s after dark that Nyiragongo reveals its most impressive sight: the world’s biggest lava lake glowing in its fiery splendour.

Best for: A dose of adrenaline
Height: 3470m
Trekking season: Year-round.
Getting there: The easiest approach is to fly into Kigali in neighbouring Rwanda and take a 3-hour taxi ride to the DRC border. Virunga National Park, who run the treks, will arrange to meet you at the border. The security situation in the Democratic Republic of the Congo is always changing, and foreign governments advise against travel to several parts of the country. Seek up-to-date advice on the situation before traveling.

This article was first published in May 2018, and last updated in September 2020.