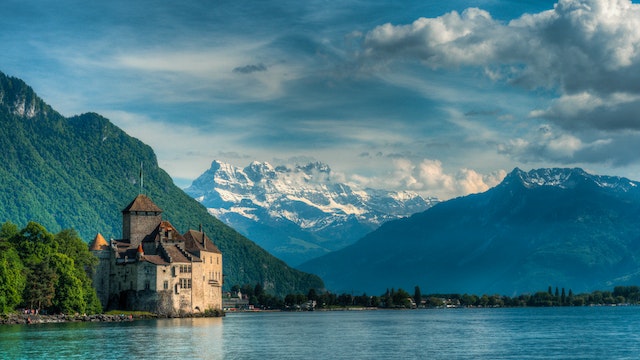 If ever a castle could fit the fairy-tale bill, the dashingly handsome Château de Chillon would be it, with its moat, double ramparts and riot of turrets and towers, plus knockout views of Lake Geneva and the French Alps. Scenically plonked on a rocky, oval-shaped island near Montreux, this is Switzerland’s pin-up castle, but try as you might to capture its beauty, all camera snaps seem to fall short.

Counts, dukes and bailiffs, poets and prisoners have left their indelible mark on its maze of courtyards, watchtowers, bastions and halls, filled with arms, period furniture, frescoes and artwork. And its Gothic romance proved irresistible to everyone from Turner to Lord Byron and Mary Shelley. Visit the castle when the crowds subside and you too will find history and views that inspire towards the lyrical and the profound.

On a site occupied since the Bronze Age, Château de Chillon echoes with the stories of counts and dukes, great feasts, damp cells and dark deeds.

Savoy period
From the 12th century to 1536, the House of Savoy controlled the fortress and the lakeshore. Suckers for a strategically placed castle, the Counts of Savoy used Château de Chillon to profit from the north-to-south Via Francigena route that passed right in front of the fort, filling their coffers with the generous contributions of travellers, merchants and pilgrims heading to Rome by way of the Great Saint Bernard Alpine Pass.

In the 13th century, Peter II of Savoy converted the castle into a summer residence. Its underground vaults later became a jail. Nobleman, historian and libertine François Bonivard, the castle’s most famous prisoner, languished in the dungeon’s dank depths for six years in the 16th century for preaching about the Reformation – a hero of sorts later immortalised in Lord Byron’s The Prisoner of Chillon poem.

Bernese period
The Savoy slowly began to ditch Chillon in favour of other castles, eventually leaving it derelict until the Bernese rocked up in 1536, having just conquered the Pays de Vaud. The castle became the bailiff’s permanent residence and was used as a stronghold, arsenal and prison, then later for storage. In 1733, the bailiffs left the castle and upped sticks for more modern, comfortable digs.

Vaudois period
Around the time of the Vaud Revolution in 1798, patriots of Vevey and Montreux seized the castle from the Bernese bailiffs, who left gracefully and without a fight. The castle has been owned by the canton of Vaud ever since, who used it to store weapons and ammunition, and subsequently as a state prison. Following restoration work in the 19th century, the castle has become one of Switzerland’s most popular cultural attractions. It also occasionally hosts events, such as musical concerts.

Château de Chillon had Romantic writers, artists and poets in raptures in the 19th century, with its medieval looks, Gothic soul and gory history.

None captured it better than Lord Byron in his 1816 poem The Prisoner of Chillon, recounting the fate and suffering of François Bonivard, thrown into the dungeon for his seditious, anti-Savoy ideas and freed by Bernese forces in 1536. Byron carved his name into the pillar to which Bonivard was supposedly chained (though some do claim the poet's signature to be a fake).

Painters William Turner and Gustave Courbet subsequently immortalised the castle’s silhouette on canvas, and Jean-Jacques Rousseau and Alexandre Dumas wrote about it.

Self-guided tours of the castle present a fascinating romp around 36 rooms and courtyards.

Top billing goes to the highly atmospheric Gothic vaults, originally used for supplies and weapons. Peter II, Count of Savoy, transformed them into a prison in 1290. In the spooky dungeon, you can sneak a peek at the original rock the castle was built on and the impressive medieval vaults upon which the whole fortress rests.

Gazing wistfully out across Lake Geneva, the castle’s trio of great halls is where the counts and dukes threw lavish banquets or dispensed justice below soaring columns and coffered ceilings.

The faded 14th-century murals of exotic beasts and foliage festooning the Camera Domini (Lord’s Bedroom) are among the castle’s best preserved, rivalled only by those in the Chapelle St Georges. Though the chapel fell into disuse during the Reformation and was later used as a granary and powder house, its 14th-century biblical frescoes are remarkably intact.

Sounds from the battlefield add a dash of drama to the weapons exhibition in the keep, the castle’s 11th-century kernel. Once accessed by drawbridge, it has been a guard tower, residence, storage, prison and powder house over the centuries. Clamber up to the top floor for wholly arresting views of the castle, lake and mountains.

Make a day of it by walking from Montreux to the magnificent stone hulk of Château de Chillon. Hugging the lakeshore and lined with sculptures and vibrant flower beds, the 3km Chemin Fleuri (Floral Path) promenade frames the sensational lake and Alpine views perfectly.

If the weather is fine, you can’t beat a refreshing dip in the lake with castle views at Plage du Château de Chillon. Open from June to September, the free lakeside lido has a little beach for picnicking, swimming and castle gazing.

Tickets for the castle can be booked online. Try to avoid the crush by visiting first thing in the morning or late in the afternoon, and avoiding weekends and peak summer season. Combined tickets include an audio guide (available in 10 languages).

For a quick coffee with a dreamy castle and lake view, try Café Byron. Food-wise, you’re better off heading back into Montreux.

The castle has its own wine, Clos de Chillon, produced from the region’s white Chasselas grape. The 12,500-sq-m vineyards spread across slopes close to the castle and form part of the Unesco World Heritage Lavaux. If you fancy a historic drop, you can buy a bottle at the museum shop.