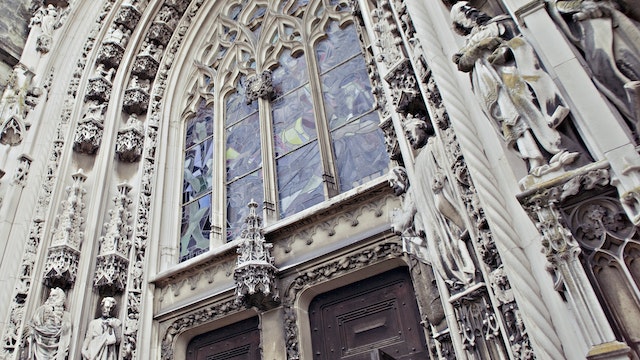 Lausanne’s Gothic cathedral, Switzerland’s finest, stands proudly at the heart of the Old Town. Raised in the 12th and 13th centuries on the site of earlier, humbler churches, it lacks the lightness of French Gothic buildings but is remarkable nonetheless. Pope Gregory X, in the presence of Rudolph of Habsburg (the Holy Roman Emperor) and an impressive following of European cardinals and bishops, consecrated the church in 1275.

Although touched up in parts in following centuries (notably the main facade, which was added to protect the interior against ferocious winds), the cathedral remains largely as it was (thanks to today's constant conservation work). The most striking element is the elaborate entrance on the south flank of the church (which, unusually for Christian churches, was long the main way in). The painted statuary depicts Christ in splendour, the coronation of the Virgin Mary, the Apostles and other Bible scenes. Free guided tours are available, on request, July through September: book in advance.