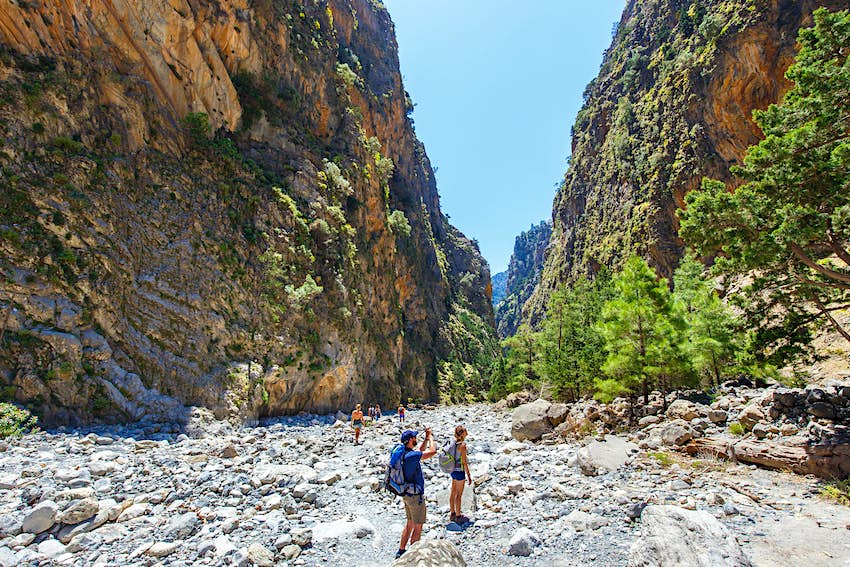 Greece's mountainous terrain makes it a hiker's paradise. The most popular routes are well maintained, while others are barely more than an overgrown sheep’s path. From kalderimia (cobbled or flagstone paths dating back to Byzantine times) to monopatia (shepherd's or monks' trails) connecting to remote settlements, hiking in Greece offers stunning vista views as you dab a little sweat from your brow.

Before you head out

Spring (April to May) is the best time for hiking. The countryside is green and fresh from the winter rains, and carpeted with wildflowers. Autumn (September to October) is also a good time.

Several companies run organized treks. The biggest is Trekking Hellas which offers a variety of hikes ranging from a four-hour stroll through the Lousios Gorge in the Peloponnese to a four-day hike around Mt Olympus.

If you’re going to be venturing off the beaten track, make sure to invest in a good map.

Keen walkers will be in their element exploring several days’ worth of monopatia that thread through the rocky monastery-topped spires of Meteora in central Greece. Before roads were built, this was the way the monks travelled from outpost to outpost and the lanes remain to this day, connecting breathtakingly situated monasteries such as Moni Megalou Meteorou, Moni Agias Triados or Moni Agiou Stefanou. The earliest monasteries were reached by climbing removable ladders but now, thankfully, you can reach them via rock-hewn steps.

The geological heart of Meteora, the Adhrakhti (obelisk) is a striking column visible from anywhere in Kastraki, the closest village. Nearby, on the east-facing side of the Pixari rock face, look for the cave-chapel of Agiou Andonios. To the left of the chapel, in the hollows of the rock face, are the Askitaria (cave hermitages), complete with hanging ladders and nesting doves. The caves were occupied until the early 20th century by solitary monks, and they remain a testament to the original spirit of Meteora, as do the six monasteries open to the public.

Meteora beyond the monasteries: adventures in central Greece

The lushly forested Pelion Peninsula, on the eastern edge of the mainland near the city of Volos, is a hiking mecca. A centuries-old network of kalderimia weave through the trees and connects quaint mountain hamlets to seaside villages. Friends of the Kalderimi helps maintain these historic cobblestone paths.

In the north, two relatively simple hikes begin near Tsagarada (Tsangarada). From the square of Agia Paraskevi, it’s two hours down to the small bay at Damouhari. And from the village of Xourichti, 4km (2.5 miles) south of Agia Paraskevi, a good cross-ridge path leads to the village of Milies, a hike of nearly three hours. A beautiful forest hike begins above the road at Fakistra Beach and follows the coast to Plaka Beach.

In the south, a wonderful downhill trek goes from Promiri to Platanias. Here too, Lafkos to Milina is a classic hike, on which you can see both sides of the peninsula.

In the northwest of mainland Greece, the Zagorohoria’s 46 traditional stone-and-slate villages are tucked into the Pindos range north of the city of Ioannina. They offer excellent accommodation in restored historic buildings, crisp alpine air and sublime views. Before they became accessible by paved road, the hamlets were connected only by mountain paths and stone bridges, most of which remain to this day.

For easier access to fantastic gorge views, head to Oxya Lookout, 5km (3.1 miles) beyond Monodendri on a good dirt road. Or climb the rock stairway, Skala Vradetou, to the Beloi Lookout – it’s signposted outside Tsepelovo, also a good base for northern Zagorohoria hikes such as the one to the Drakolimni (Dragon Lake).

The rural Peloponnese offers a variety of excellent walks and longer hikes. The Mani, the region’s rugged and remote southwestern peninsula, is a popular place to amble, with mountains tumbling down to gorgeous coastal views. The coastal village of Kardamyli, with the Messinian Gulf and the Taÿgetos Mountains as a backdrop, is among the most popular hiking destinations in Greece. The Vyros Gorge, just north of town, runs to the foot of Mt Profitis Ilias (2407m / 7897 feet), the Taÿgetos’ highest peak.

The hills behind the village are criss-crossed with an extensive network of color-coded walking trails. Most of these hikes are strenuous, and the ground often relentlessly rough, particularly if you venture into the boulder-strewn gorge itself.

Many trails pass through the mountain village of Exohorio, perched on the edge of the Vyros Gorge at an altitude of 450m (1476 feet). For nonwalkers the village is also accessible by road, and it’s a good place to get into a spot of more gentle exploration.

Northwest of Kardamyli, you can hike through the Lousios Gorge to explore charming village monasteries in the aptly named region of Arcadia. The most accessible departure points are from the striking stone villages of Stemnitsa or Dimitsana. Walks vary from one hour to long (and hilly) day trips, where you can hike the entire length of the gorge taking in Prodomou and New and Old Philosophou monasteries.

Crete: Samaria Gorge is one of Europe’s most popular hikes, with myriad wildflowers and endangered wildlife. The Zakros and Kato Zakros trail through the mysterious Valley of the Dead leads to a remote Minoan palace site.
Andros: Well-established hiking paths connect villages or trace unspoilt valleys marked by ancient water mills.
Naxos: The broad central plain of olive groves, Tragaea has plenty of trails linking rural villages. Filoti offers a strenuous climb to the Cave of Zeus, a natural cavern on the slopes of Mt Zeus.
Tilos: Countless traditional trails follow dramatic clifftops and lead down to isolated beaches; it’s also a bird-lover’s paradise.
Nisyros: This lush volcanic island offers hikes that lead into the hissing craters of Mt Polyvotis.
Paxi: A diminutive Ionian isle perfect for escaping the crowds on paths along ancient olive groves and snaking dry-stone walls.
Ithaki: Mythology fans can hike between sites linked to the Trojan War hero Odysseus.
Samos: The quiet interior of this Aegean island hides mountain villages and forested slopes of Mt Ambelos.
Hydra: A vehicle-free island in the Saronic Gulf with well-maintained paths to beaches and monasteries.
Alonnisos: A network of established, easy trails leads to pristine beaches.

This article was originally published in April 2015 and updated in June 2020.

The 10 best travel experiences in the US, according to Lonely Planet