Australia is nothing short of legendary on the global surf scene with the Pacific roaring in on one side and the bath-warm Indian Ocean caressing the other.

This land Down Under sports right-hand point breaks, mellow logger waves and pounding slab barrels that can smash boards in two with a whole load of beach in between. It's also given the world some of the top pros: Gilmore, Fitzgibbons, Fanning to name a few.

Lashing down the fiberglass for a surf road trip here is still the stuff of bucket lists, no matter if you're cruising the blustery capes of South Australia, the rainforest-fringed shores of Queensland, or the talcum beaches of Western Australia. All of those and more feature on this curated list of the best places to surf in Australia.

J-Bay, Waimea, Trestles – Margaret River is up there with surf's A-list destinations. A 70-mile run of craggy coast that spills down from lush bushlands and breezy winelands.  Western Australia has break after break with the potential to dole out the ride of your life.

The star of the show is surely the Mainbreak. It's a swell-sucking A-frame reef with rights and lefts that invite playful turns and curvy cutbacks. No surprise then that it's the home of the annual World Surf League Margaret River Pro event in spring. Right next to that is The Box, a bullet-chamber of a wave that's fast and quick on a really shallow rock shelf.

If you don't keep the company of Kelly Slater et al, then don't despair. One of the great joys of Margaret River is cruising the coast road in search of spots that suit. There are beginner waves at Cowaramup Bay and all manner of intermediate wedges for the academics at Smiths Beach. The downside? Sharks.

As the south channel swells roll up and hit the rocks of Burleigh Heads, they get bent into the sandy deposits that filter out of Tallebudgera Creek. The result is a set of about four different wave sections that can – when the surf gods are drunk on ambrosia – connect up to offer 300-meter rides from point to beachfront. That's rarer than a rainbow eucalyptus, though.

Usually, the crowd is spread up and down the line with most waiting on The Point, the premier part of Burleigh Heads. That's a reeling right that gives barrels on almost every ride.

Crowds at Burleigh are typically local crews with a speckling of travelers on an East Coast Australia mission. Beginners won't want to play here, but there are more welcoming beach breaks to the north and south: head to Palm Beach and Surfers Paradise.

Getting to Burleigh Heads: Drive south from Gold Coast on Sunshine Boulevard for 15 minutes.

The lines roll into Bells Beach so darn orderly that they'd give a British post office a run for its money. This right-hander is fueled by almost constant winter storm systems in the lower latitudes of the Southern Ocean. When they meet the Victorian coastline just south of Torquay, they shape up into peeling rights with a trio of different take off points.

The Bells Bowl is the elusive bomb that's considered the best of them. It can soak up 20-foot swells and is the spot where Simon Anderson proved the thruster fin setup to the world back in the early '80s, changing the face of performance riding forever.

It's easy to stand in awe of the location at Bells. But there's no time to gawp. You've also got Winkipop, a rifle-like advanced right on the northeast end of the beach, plus flagship stores from the towering Aussie brands that were born here, like Rip Curl and Quiksilver.

Getting to Bells Beach: Drive the Great Ocean Road just out of Torquay. Bells is one of the first beaches you'll come to.

On its day, the Lennox Head point break is a right-hander to rival any on the globe. It's been a magnet for proper rippers and pros since the 60s, mainly because it can tame the biggest southeast swells that creep up from the Southern Ocean. Those wrap into the rocks and form into beefy shoulders that section out from hollow to open-face, a perfect playground for unleashing cutbacks and bottom turns over a ride that can last 200 meters or more.

Lennox Head can mellow out enough to appeal to intermediates on occasion. If that's you, consider sitting a little further down the line where the takeoff is less challenging and the ride shouldn't burn the hamstrings as much. Be warned: The entry point to Lennox is famously solid, with uber-slippery rocks that have dented plenty of fiberglass in their time.

Getting to Lennox Head: There are direct flights to the nearby Ballina Byron Gateway Airport from Melbourne and Sydney. Brisbane is just over two hours' drive up the M1.

Best spot for remote bays and beaches that require a 4X4

Kangaroo Island is famed for its honey-making bees, its sweet white wines, and its epic surf. You'll need an off roader to navigate all the spots, which range from the multi-level beach peaks of Vivonne Bay (where it's not uncommon to surf with dolphins) to the harder reefs of Hanson Bay (watch out for the rips).

You'll notice that the crowds thin out a load on this off-radar isle fragmented from the side of South Australia. It can get a little busy in the autumn months when the conditions conspire to give regular south swell pulses and reliable northerly offshores. Mostly, though, this is for surfers who're keen to get away from it all.

Getting to Kangaroo Island: Hop on the ferry at Cape Jervis south of Adelaide.

Like so many of the world's surf meccas – Tamarindo, Tahiti – before it, Byron Bay was canonized by the coming and goings of Bruce Brown of Endless Summer fame. His reels showed the planet somewhere where teal-green waters peeled off pretty rocks into sandy bays lined by gnarled eucalyptus trees.

Wave wise, you've got a few to pick from. Tallows hoovers up a lot of swell and works when elsewhere is flat. Broken Head is a Queensland-style point with a right-hand shoulder for experienced surfers. And then there's The Pass, a cruisy all-person wave that's the highlight of Byron; always busy, always fun.

Thousands now come to get their slice. And it's not just surfers. This town has flower-strewn hippies pining for the return of the Summer of Love, influencers clad in the newest eco-friendly beach wear, businessfolk whizzing in Porsches – you name it. It's so popular that some say Byron's glory days are done, but the almost unceasing winter swells (April to September) still do plenty of talking.

Getting to Byron Bay: There are flights to the Ballina Byron Gateway Airport from Sydney and Melbourne. It takes 30 minutes to arrive in town from the terminals by car.

Noosa is pretty fickle considering the god-like reputation it seems to have globally. You need either really powerful southern swells to curl around the headlands or cyclone storm systems sitting off New Zealand to get things pumping. When that happens, though…

A quintet of tactically positioned headlands – known collectively as the Noosa Heads – generate a string of nigh-on perfect right-hand points. A few of them connect for the best sessions, but it's Tea Tree Bay at low tide that really turns on the goods, with sometimes-hollow walls of playful water that are all about cruisy rides.

What Noosa can always offer is a laid-back Sunshine Coast feel and an escape to nature. This is a land where the kauri pines and eucalyptus trees creep ever near to the Pacific. In fact, you'll basically be surfing within the confines of the Noosa National Park!

Getting to Noosa: Fly into the Sunshine Coast Airport. From there, public buses go straight up to Noosa in a little over 30 minutes.

Best place to learn to surf

Ask any WSL pro about surfing Bondi and they'd scoff at you over their protein smoothie. The waves here are sloppy sandbanks that close out on pretty much anything over head height. They're always busy, too. Like, flying-foam-board busy with surf schoolers and city slickers trying to score their first drop-ins.

But you don't come to Bondi for the quality. You come for the vibe. Fresh-faced backpackers, tattooed bikers, buff iron pumpers, New Age meditators, family picnickers – they're all here, meeting and mingling where the salt spray spirals off the Pacific and into suburban Sydney. It's hardly a wonder that the place has become legendary in the annals of Aussie surf culture, even despite its waves.

With whitewash to their back, there are tons of surf school options in this beginner hotspot. Lets Go Surfing has one of the best set-ups. They've got a 25-year teaching pedigree and packages aimed at adult learners and families alike.

Getting to Bondi: Bondi Beach is a suburb of Sydney. To get there, ride the city Illawarra line all the way to Bondi Junction from Central. It takes about half an hour.

You may also like:
Australia's top 10 places for wild swimming
Australia’s Great Ocean Road is one of the world's best drives: here are the best detours
Sustainable Australia: top tips to minimize your carbon footprint and travel slow 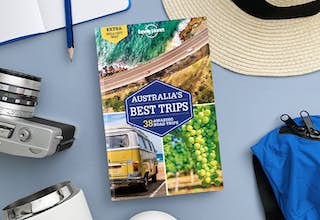