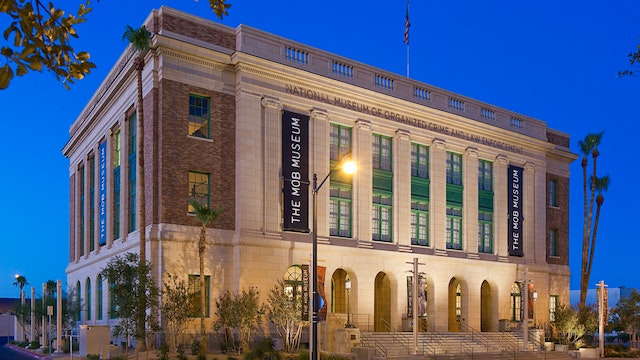 The myth and mystique of mobsters from Bugsy Siegel to Al Capone get the museum treatment inside a hulking Downtown courthouse where real gangsters sat for federal hearings in 1950–51.

Thoughtfully curated exhibits chart the history of organized crime in America and feature hands-on FBI equipment and mob-related artifacts. An extra fee provides access to a firearm training simulator, a crime lab or a Prohibition-era distillery tour where those over 21 can try the museum’s own moonshine or its house-brewed beer.

Opened on February 14, 2012 – the 83rd anniversary of the notorious St Valentine's Day Massacre in Chicago – the museum is officially known as the National Museum of Organized Crime & Law Enforcement.

Despite a gift store selling aprons printed with AKs, this museum takes its sensationalistic subject seriously. Interactive exhibits were designed by the same team behind Cleveland's Rock & Roll Hall of Fame & Museum and the International Spy Museum in Washington, DC. Thoughtfully curated displays tell the story of organized crime in America from the perspective of both gangsters and G-men, interviews with real-life Tony Sopranos.

Listed on the National Register of Historic Places, the building that houses the museum was built in 1933 and was once the Las Vegas post office and courthouse. It's one of the oldest buildings in Las Vegas, a city that only really got started as recently as 1905. On the proviso that it be restored and used for cultural purposes, the federal police, who operated the courthouse, sold the building in 2002 to the City of Las Vegas for the princely sum of $1.

Break up your journey through the museum's exhibits, which could easily take all morning or afternoon to see, with a visit to the small theater. Plonk yourself down in one of the plush seats to watch videos projected on the big screen. If you're looking for History Channel-style documentaries, you'll be disappointed – most of the clips being shown are classic Hollywood gangster movies.

Near the museum's entrance, the Mob Museum gift shop is a trove of offbeat Sin City souvenirs, whether you're on the hunt for a gangster fedora, a spy pen that writes with ultraviolet ink, a wise guy's family cookbook or a coffee mug with a handle made of brass knuckles. On a nerdy note, the shop fills its bookshelves with respectable tomes on the history of Sin City and the American Mafia.

The Mob Museum even has its very own Art Deco-styled speakeasy (for those 21 years or older) where you'll need a password to enter (no, we won't make it easy for you to find) to enjoy the bar's homages to Prohibition-era cocktails such as the Bees Knees (gin, lemon and jalapeno honey).

Located at 300 Stewart Ave, the museum is open daily from 9am-9pm. Adult tickets are $30, students pay $17 and those under 10 go free. Regular discount ticket codes will often appear online. Audioguides in major languages cost $4. Parking in the adjacent lot costs $7.

If you're looking to get hitched in Vegas, the Mob Museum's weddings include a 'Made Man' ceremony, in which an actor offers you lifetime admission to 'the family.'

Due to the success of American reality TV series Tanked, which follows innovative fish tank makers Acrylic Tank Manufacturing, many Mob Museum visitors want to see the 300-gallon fish tank made especially on the show. Inspired by Lizzie D, a tugboat which sank near New York Habor with a load of illegal liquor onboard, the fish tank can be found in The Underground section of the museum.