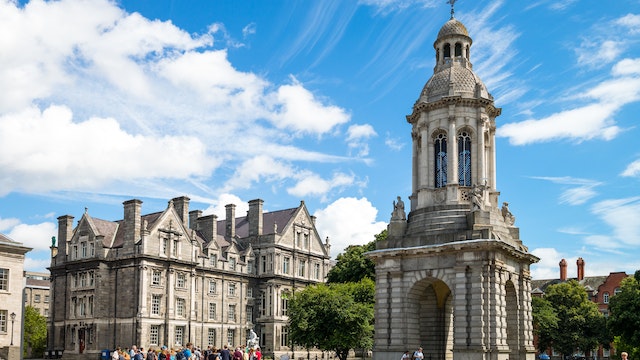 Trinity College Dublin is Ireland's most prestigious university, a collection of elegant Georgian and Victorian buildings, cobbled squares and nature-friendly wildflower meadows that make for a delightful place to wander. Located next to Grafton Street in the heart of the city, Trinity College is one of Ireland’s most visited sites, attracting more than two million visitors per year. Its biggest draws are the barrel-vaulted Long Room in Old Library, one of the most photographed rooms in Dublin, and the Book of Kells, the beautifully illuminated Gospel manuscript that dates back to the 9th-century and is one of Ireland's greatest cultural treasures.

The campus is a masterpiece of architecture. Notable buildings include the 1798 Chapel, with its painted windows, and the red-brick Rubrics Building which dates from around 1690, making it the oldest building in the college. There’s also the neo-Gothic Museum Building, home to the Zoological Museum (a bit of a hidden gem that's great for kids) with a collection that includes examples of extinct creatures such as Ireland’s Last Great Auk and the Tasmanian Wolf. Not to be outdone is the brutalist, brilliant Berkeley Library, designed by Paul Koralek in 1967, and the Arts & Social Science Building, which is home to the Douglas Hyde Gallery of Modern Art - one of the country's leading contemporary galleries.

Towards the eastern end of the complex, College Park is a lovely place to lounge around on a sunny day and occasionally you'll catch a game of cricket. On sunny days, people flock to the campus bar, The Pavillion (or 'The Pav' as it's known to students) and lounge on the cricket grounds with a cold can of beer. Slightly further afield on Pearse Street is the Science Gallery, a family-friendly attraction that offers a lively and informative exploration of the relationship between science, art and the world we live in.

The college was established by Queen Elizabeth I in 1592 when Ireland was under British colonial rule. It was built on land confiscated from an Augustinian priory to the south east of the city walls, and modelled on England's University of Oxford and University of Cambridge. The goal of the college was to stop the brain drain of young Protestant Dubliners, who were skipping across to continental Europe for an education, choosing universities in France and Italy – and so risking conversion to Roman Catholicism. It remained completely Protestant until 1793, but even when the university relented and began to admit Catholics, the Catholic Church held firm; until 1970, any Catholic who enrolled here could consider themselves excommunicated. It also remained a gentlemen-only university until 1904 when the first women were allowed to study there.

Trinity is regarded as one of Europe's most outstanding universities, producing a host of notable graduates – including the writers Jonathan Swift, Oscar Wilde, Bram Stoker and Samuel Beckett, as well as Oscar-nominated actress Ruth Negga and novelist Sally Rooney, whose novels Conversations with Friends and Normal People were set in Trinity College.

A great way to see the grounds is on a student-led walking tour, departing from the Regent House entrance on College Green. There are also guided tours of the Old Library.

The college is located right in the heart of the city and is easily accessible by public transport; the Green Line of the Luas stops outside the College Green entrance, and most city center buses have a stop nearby.

If you want to stay near Trinity College, prepare to pay for the privilege. Most of the hotels nearby are of the top-end luxury variety.