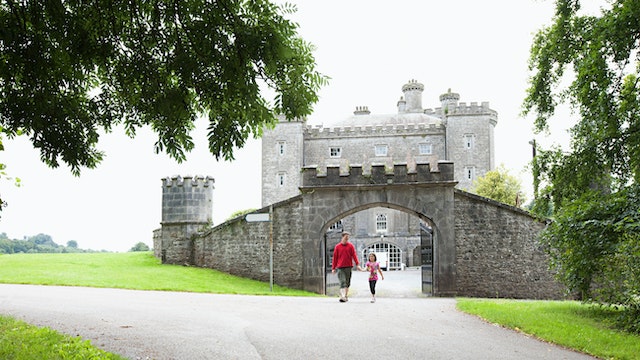 Slane Castle is a 300-year-old sprawling estate on the banks of the River Boyne in County Meath.  The neo-gothic castle and grounds  are open to visitors for tours, where you can see up close the living quarters and exquisite 18th century interiors. It is still very much the private residence of Henry Conyngham, Earl of Mountcharles and his family—the castle has been their ancestral home since 1703.  The Conyngham’s are originally a noble Scottish family, who came to Ireland in 1611.

The castle was designed by two of the country's most famous architects, James Wyatt and Francis Johnson, who oversaw the build in Gothic-revival style in the late 18th and early 19th centuries.  The dramatic  gates at the Mill Hill entrance are highly regarded as being outstanding examples of gothic design and are much photographed to this day.

The castle has a long association with rock royalty. U2, friends of Lord Henry, recorded their 1984 album The Unforgettable Fire while staying at the castle. The video for Pride (In The Name of Love) was filmed in the Gothic Revival Ballroom.

In 1991, one-third of the castle was gutted by a fire. The distress was compounded by the discovery the castle was not insured. In order to rebuild, Lord Henry focused his attention on attracting big international rock acts for the annual Slane Castle summer concert held in the shadow of the castle. The Rolling Stones, Madonna, David Bowie, Queen, Bruce Springsteen, Bob Dylan, Guns N' Roses and U2 (3 times to date) have all headlined.  The concerts formed part of a fundraising drive that led to a painstaking 10-year restoration that saw the castle reopen to visitors in 2001.

Visitors can buy tickets for a 45-minute castle tour, but it's highly recommended to combine this with a visit to Slane Whiskey Distillery, housed in 250-year-old stables on the grounds of the estate. Visitors can see the whisky distilling process in the likes of the cooperage, the barley room and the maturation warehouse.  The tour concludes with raising a glass of Slane Irish Whiskey.

The castle has currently two restaurants on site, and the nearby village of Slane, just 1.5 km away, offers many options for lunch and casual dining options, including Brabazon in near-by Tankardstown House.

Slane Castle is nestled on a hillside in County Meath, just under one hour’s drive from Dublin.  There are direct bus routes from Dublin city centre to the village of Slane.

It is in the heart of the Boyne Valley region, with lots of other heritage sites in the vicinity that can be explored over the course of a day or two, including the famous  prehistoric monument at Newgrange, the highcross of Monasterboice, Mellifont Abbey, and the ruins of a Franciscan Monastery, dating from 1512 on the hill of Slane, where St Patrick is said to have lit the fire introducing Christianity to Ireland.

Tickets for tours should be booked in advance and cost from €14 per adult, with reduced pricing for young people, students and groups. Children under 5 years are free. Combined tickets for the castle and distillery tour are discounted.