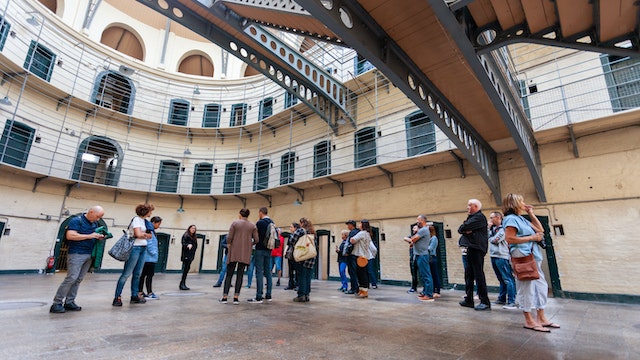 If you have any desire to understand Irish history – especially the long-running resistance to British colonial rule – then a visit to this former prison is an absolute must.

An imposing grey building, built in 1796, it's played a role in virtually every act of Ireland's painful path to independence, and even today, it still has the power to chill. Sometimes referred to as "The Bastille of Ireland", Kilmainham Gaol was decommissioned in 1924 and is now a museum with an enthralling exhibit on the history of Irish nationalism.

Browsing the museum will give you excellent context and access to some of the former prisoners' personal belongings and letters. The enthusiastic guides provide a thought-provoking tour of the eerie prison, the largest unoccupied building of its kind in Europe. The highly memorable tour takes about 90 minutes and finishes in the yard where the leaders of the failed 1916 Easter Rising were executed.

Ireland’s struggle for independence was a bloody and tempestuous journey, and this forbidding prison on the western edge of the city, which opened in 1796, played a role in it for nearly 150 years, as the forced temporary home of many a rebel and revolutionary.

The uprisings of 1798, 1803, 1848, 1867 and 1916 ended with the leaders' confinement in Kilmainham Gaol. Robert Emmet, Thomas Francis Meagher, Charles Stewart Parnell and the 1916 Easter Rising leaders were all visitors, but it was the executions in 1916 that most deeply etched the jail's name into the Irish consciousness. Of the 15 executions that took place between 3 May and 12 May after the revolt, 14 were conducted here. As a finale, prisoners from the Civil War were held here from 1922. The last prisoner, Éamon de Valera, was released in July 1924. He went on to serve as Taoiseach (Prime Minister) of Ireland on three separate occasions, and eventually became President.

But it’s not just political prisoners whose stories are shared here. Kilmainham Gaol offers a great, and at times uncomfortable, insight into the conditions in Ireland in the 18th, 19th and early 20th-centuries, and the lives and struggles of its people. Registers show just how easy it was to get on the wrong side of the law back then, particularly during the Great Famine (1845–49) when starvation forced people to steal and beg for food, or deliberately break the law in order to have a roof over their heads. Many of those who did leave the prison ended up being deported to the other side of the world, never to return home. Some 4000 convicts, many petty thieves, were held in Kilmainham Gaol before being shipped to the British colonies in Australia.

The Kilmainham Gaol Restoration Society was established in 1958 to restore the former prison, transforming it into the most important historical monuments in the country with the help of voluntary labor, free materials and donations - such was the desire to preserve the site. Ahead of the centenary of the 1916 Rising, the Office of Public Works invested €5 million in refurbishing the site.

Entrance is by guided tour and is managed through timed tickets. Online booking is required. Book as far in advance as possible to get your preferred visiting time. If you're planning a trip on short notice, cancellation tickets for the day are released online between 9:15am and 9:30am. Group bookings (10 or more people) can be arranged by emailing kilmainhamgaol@opw.ie. Wheelchair users, visitors with additional needs and carers are advised to email the museum in advance to arrange a visit.

Kilmainham Gaol is located 3.5km from Dublin city center; a number of bus routes have stops nearby and the nearest Luas stop (red line) is Suir Road. Entrance is via the Kilmainham Courthouse next door.

While in this part of the city you can visit the fine collection at the Irish Museum of Modern Art (don’t forget to visit the gardens too), which is about a 15-minute walk from Kilmainham Gaol. If the weather is good, enjoy a stroll in War Memorial Gardens. Slightly further afield is the Phoenix Park.