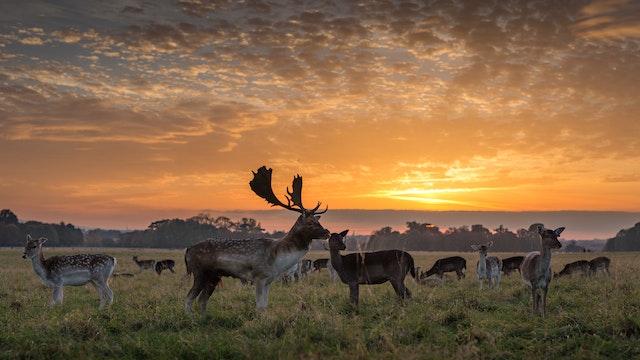 The hugely impressive 709 hectares that comprise Dublin's Phoenix Park are not just a magnificent playground for all kinds of sport—from running to polo—but are also home to the president of Ireland, the American ambassador and a large herd of fallow deer. It's also where you'll find Europe's oldest zoo. How's that for a place to stretch your legs?

Do as Dubliners do on a fine day and run, cycle, play, walk, take in a game of cricket, watch a polo match, see the deer (don't feed them), or just lie down, depending on your fancy. There's always something going on in the Phoenix Park, but in summer you'll find it keeps a jam-packed schedule with cultural events, live music, festivals, and games.

The main thoroughfare is Chesterfield Avenue, which runs northwest through the length of the park from the Parkgate Street entrance to the Castleknock Gate. Many landmarks can be found strolling along here. Near the entrance is the 63m-high Wellington Monument obelisk, which was completed in 1861. Close by is the People's Garden, dating from 1864, and the bandstand in the Hollow, a lovely picnic spot. Dublin Zoo is located at this end of the park, as is the quaint and lovely Victorian tearooms.

Also on Chesterfield Avenue is Áras an Uachtaráin - residence of the president of Ireland - which is open to the public through guided tours on Saturdays. Across the road, and easily visible from it, is the massive Papal Cross, which marks the site where Pope John Paul II preached to 1.25 million people in 1979. In the centre of the park the Phoenix Monument, erected by Lord Chesterfield in 1747, looks so unlike a phoenix that it's often referred to as the Eagle Monument.

Next door to Áras an Uachtaráin is the restored four-storey Ashtown Castle, a 17th-century tower house, which you can visit on a guided tour.

The southern part of the park has many football and hurling pitches; although they actually occupy about 80 hectares (200 acres), the area is known as the Fifteen Acres. At weekends the football pitches are used by local league teams that can be fun to watch. To the west, the rural-looking Glen Pond corner of the park is extremely attractive.

At the northwestern end of the park is the opulent Farmleigh House, which can only be visited by joining one of the 30-minute house tours. However, the real highlight of the 32-hectare estate is the garden, where regular shows are held, and where you'll find a restaurant and cafe. There is also an extensive program of cultural events in summer, ranging from food fairs to classical concerts. The 37m clock tower once housed an 8000L water tank that serviced the estate; views from the top are sensational.

Back towards the Parkgate St entrance is the Magazine Fort on Thomas’s Hill.

The deer came first, introduced by Lord Ormond in 1662 when lands once owned by the Knights of Jerusalem were turned into a royal hunting ground. In 1745 the viceroy Lord Chesterfield threw it open to the public and it has remained that way ever since. (The name 'Phoenix' has nothing to do with the mythical bird; it is a corruption of the Irish fionn uisce, meaning 'clear water'.)

In 1882 the park played a crucial role in Irish history, when Lord Cavendish, the British chief secretary for Ireland, and his assistant were murdered outside what is now the Irish president's residence by an obscure nationalist group called the Invincibles. Lord Cavendish's home is now called Deerfield and is used as the official residence of the US ambassador.

Opening hours, tours and other practicalities

Phoenix Park Visitor Centre has a self-guided exhibition on the history and wildlife of the park; you can also arrange and collect tickets for the Saturday tours of Áras an Uachtaráin, and tours of Ashtown Castle.

One of the best ways to see the park is by bicycle. If you don't have wheels of your own, you can rent a bike from Phoenix Park Bikes at the Parkgate Street entrance. Bring valid photo ID. Rental fees are €6 for up to one hour; €10 for up to three hours; and €15 for a full day. The company also offers guided bike tours.

Phoenix Park is open 24 hrs a day, seven days a week, all year round, but it is not advised to hang around after dark.