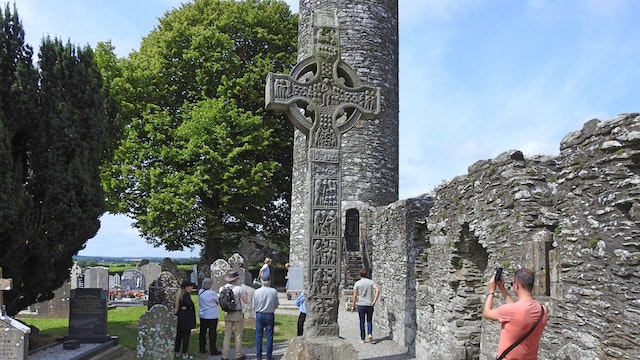 Crowing ravens lend an eerie atmosphere to Monasterboice, an intriguing monastic site down a leafy lane in sweeping farmland, which contains a cemetery, two ancient church ruins, one of the finest and tallest round towers in Ireland, and two of the most important high crosses.

Come early or late in the day to avoid the crowds. It's just off the M1 motorway, about 8km north of Drogheda.

The original monastic settlement here is said to have been founded in the 5th or 6th century by St Buithe, a follower of St Patrick, although the site probably had pre-Christian significance. St Buithe's name somehow got converted to Boyne, and the river is named after him. An invading Viking force took over the settlement in 968, only to be comprehensively expelled by Donal, the Irish high king of Tara, who killed at least 300 of the Vikings in the process.

The high crosses of Monasterboice are superb examples of Celtic art. The crosses had an important didactic use, bringing the gospels alive for the uneducated, and they were probably brightly painted originally, although all traces of colour have long disappeared.

The cross near the entrance is known as Muiredach's Cross, named after a 10th-century abbot. The western face relates more to the New Testament, and from the bottom depicts the arrest of Christ, Doubting Thomas, Christ giving a key to St Peter, the Crucifixion, and Moses praying with Aaron and Hur.

The West Cross is near the round tower and stands 6.5m high, making it one of the tallest high crosses in Ireland. It's much more weathered, especially at the base, and only a dozen or so of its 50 panels are still legible. The more distinguishable ones on the eastern face include David killing a lion and a bear.

A third, simpler cross in the northeastern corner of the compound is believed to have been smashed by Cromwell's forces and has only a few straightforward carvings. This cross makes a great evening silhouette photo, with the round tower in the background.

The round tower, minus its cap, is more than 30m tall, and stands in a corner of the complex. Records suggest the tower interior went up in flames in 1097, destroying many valuable manuscripts and other treasures. It's closed to the public.