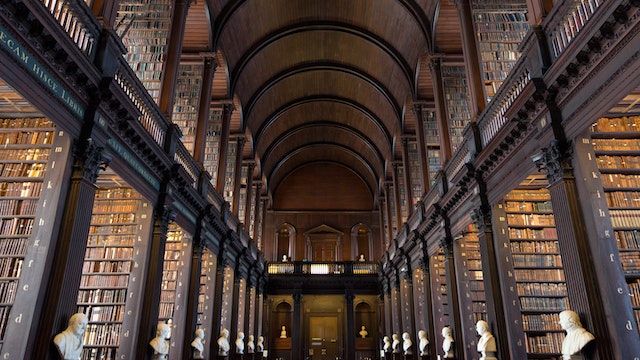 Trinity's greatest treasures are found within the Old Library and the incredible Long Room is one of the most photographed rooms in Dublin, for good reason.

The star of the show is the Book of Kells, a breathtaking, illuminated manuscript of the four Gospels of the New Testament. Unfortunately, only a few pages are ever on display at one time and in busy times it can be just a quick look for visitors. You can linger more in the magnificent Long Room, which houses around 200,000 of the library's oldest and rarest volumes.

Other displays include a one of the last remaining copies of the Proclamation of the Irish Republic, read out by Pádraig Pearse at the beginning of the Easter Rising in 1916, as well as the Trinity College Harp, the oldest medieval harp in Ireland and the model for the Guinness logo and the flag of the Irish president.

The history of the Book of Kells is almost as fascinating as its intricate illuminations. It is thought to have been created around AD 800 by the monks at St Colmcille's Monastery on Iona, a remote island off the coast of Scotland; repeated looting by marauding Vikings forced the monks to flee to Kells, County Meath, along with their masterpiece. It was stolen in 1007, then rediscovered three months later buried underground. The Book of Kells was brought to Trinity College for safekeeping in 1654 and now more than half a million visitors queue up to see it annually. The 680-page (340-folio) book was rebound in four calfskin volumes in 1953.

There has been a library at Trinity College since its founding in 1592 and the Old Library dates from 1732. In 1743, the college began collecting the busts that now line the Long Room; notables include Jonathan Swift, Shakespeare, Aristotle and Wolfe Tone.

Despite being sometimes described as a ‘Harry Potter library’ online, the Old Library does not appear in the wizarding films but it does bear a striking resemblance to the Jedi Archives in the Star Wars franchise, a resemblance which Lucas Film has denied was intentional.

The Book of Kells and Trinity Old Library are open seven days a week and is wheelchair accessible. Timed entry tickets are available online. An adult ticket is €16 and concessions are available for seniors, students and groups. Your entry ticket also includes admission to temporary exhibitions on display. The visit takes about 40 minutes.

The Old Library gets very busy during the summer months and you'll only get a fleeting moment with the Book of Kells, as the constant flow of viewers is hurried past. To linger in front of the masterpiece, you will need to go at a very quiet, off-peak time and be very lucky.