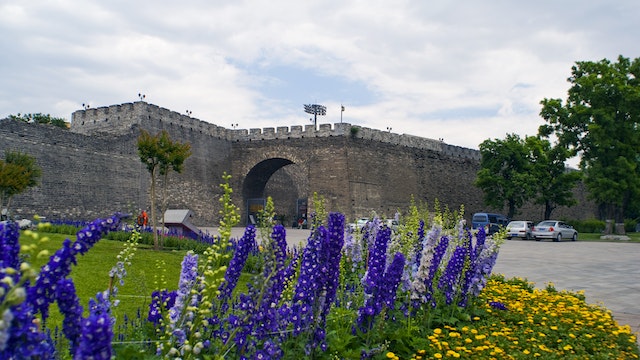 This immense fortress, part of the Ming City Wall Ruins Park, guarded the southeast corner of Beijing's city walls. Originally built in 1439 but repaired numerous times over the centuries, the tower is skewered with a formidable grid of 144 archery embrasures, able to rain fire on would-be attackers. Visitors can mount the battlements and explore the tower itself, a magnificent maze of carpentry over multiple floors, including an exhibition of historical photographs.

From the ramparts, you can photograph the remains of the city wall as it flows west, while trainspotters can admire the rolling stock grinding in and out of Beijing Railway Station. Keep an eye out for graffiti scratched into the tower by American and Russian soldiers during the Boxer Rebellion in 1900. Allied forces overwhelmed the redoubt after a lengthy engagement (during which it was heavily damaged), en route to relieve the besieged Legation Quarter.

Also known as the Fox Tower, it was just outside here that the body of a murdered British woman, Pamela Werner, was discovered in 1937, as recounted in the bestselling true-crime novel Midnight in Peking. Travel company Bespoke Travel Co runs the official (Penguin-sanctioned) Midnight in Peking Walking Tour, occasionally hosted by author Paul French himself when in town, but otherwise by the history buffs at Beijing Postcards.

The tower formerly housed Red Gate Gallery, which has since moved to 798 Art District. Architecturally comparable to the Southeast Corner Watchtower are Deshengmen Arrow Tower and Zhèngyáng Gate Arrow Tower. A visit here pairs nicely with a jaunt through the Ming City Wall Ruins Park and a walk north to the Ancient Observatory.