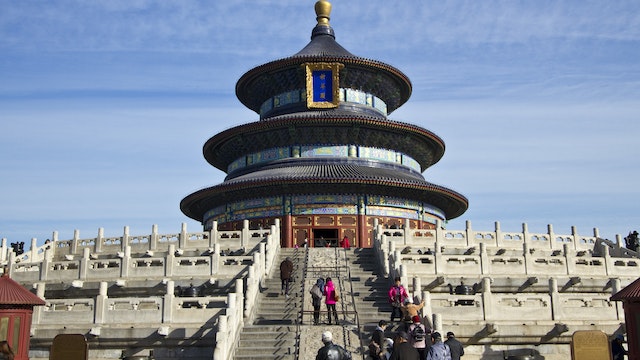 An oasis of methodical Confucian design, the 267-hectare Temple of Heaven Park is unique. It originally served as a vast stage for solemn rites performed by the emperor (the literal 'Son of Heaven'), who prayed here for good harvests at winter solstice and sought divine clearance and atonement. Since 1918 this private imperial domain has opened its gates to common folk, who still congregate daily to perform taichi, twirl on gymnastics bars and sing revolutionary songs en masse.

Don't expect to see worshippers at prayer; this is not so much a temple as a place of arcane, Confucian-inspired statecraft. The emperor, the Son of Heaven (天子, Tiānzǐ), visited the Temple of Heaven twice a year, with the more important ceremony performed at winter solstice. The royal entourage proceeded from the Forbidden City to the Imperial Vault of Heaven in silence, with commoners instructed to close all windows and remain indoors. The procession included elephant and horse chariots and long lines of lancers, nobles, officials and musicians. The imperial sedan chair was 12m long, 3m wide and employed 10 bearers.

Although there are four main entry points to the park (with the east and west gates most convenient for visitors; through tickets cannot be purchased after 4pm), the imperial approach was via Zhaoheng Gate in the south leading directly to the Round Altar. On this open-air, raised dais the ceremonies to heaven took place, performed according to solemn protocol every winter solstice by the emperor himself.

Arranged in three tiers, the Round Altar revolves around the imperial number nine. Odd numbers were considered sacrosanct in imperial China – nine (jiǔ) is the highest single-digit odd number and a homonym for long life. The altar is arranged in three tiers, with the top tier containing nine rings of stones, arranged in multiples of nine. The stairs and balustrades are also multiples of nine.

North of the Round Altar is the Imperial Vault of Heaven, enclosed by a low circular wall known as the Echo Wall. Despite its splendid, shapely appearance, the Vault of Heaven was a storeroom, used to keep the spirit tablets of the gods and other materials needed for the ceremonies on the Round Altar. Seen from above the structures of the Temple of Heaven are round and their bases square, a pattern deriving from the ancient Chinese belief that heaven is round and earth is square.

The Echo Wall, 65m in diameter, is so named for its unique acoustic properties. A quiet word or two spoken a few feet from the wall can be heard at the opposite point on the circle (although the din of other tourists chattering can drown it out!). Continuing on from the Imperial Vault of Heaven is the majestic, 360m-long Red Stairway Bridge, an imperial thoroughfare leading to the marvellous centrepiece of the Temple of Heaven, the Hall of Prayer for Good Harvests.

A much-photographed icon, the triple-eaved Hall of Prayer for Good Harvests is made entirely of wood without the use of nails, with the heavy roof supported by 28 wooden pillars. First built around 1420, it was burnt to cinders by a lightning strike in 1889. A faithful reproduction based on Ming architectural methods was erected the following year, with timber imported from the USA, since by that point China lacked trees big enough for the task. Rich in esoteric symbolism, the four largest central pillars represent the seasons, the 12 in the next ring the months of the year, and the 12 outermost columns represent the day, broken into 12 ‘watches’ of two hours each. Writhing about on the ceiling is a vivid dragon-phoenix relief, representing the emperor and empress.

Connected to the Hall of Prayer for Good Harvests by the ornamental Long Corridor, the Animal Killing Pavilion was where oxen, sheep, deer and other beasts were slaughtered and prepared before being presented as divine offerings. You'll need to show you passport to get a look in at the copper boilers and cleaning sink on display.

To the west of the park, the Divine Music Administration is where the ranks of drummers, pipers and bellringers got their act together prior to the imperial ceremonies. Now a museum, exhibits cast light on zhōnghé sháolè (中和韶乐), the ceremonial music reserved for the imperial court, and there are galleries devoted to ancient Chinese musical instruments. Adjacent to the West Heavenly Gate, the Fasting Palace is where the emperor hunkered down in preparation for the winter solstice ceremony, abstaining from all earthly pleasures for a day or two. Resembling a Forbidden City in miniature, it's surrounded by a moat and has its own Drum and Bell Tower. You'll need your passport for entry.

Since 1918 the Temple of Heaven has opened its gates to Beijing's lǎobǎixìng (old 'hundred names' – literally common folk). Among the 4000 or so knotted cypresses, you'll see locals performing taichi, kung-fu routines, dancing, or assembling into impromptu choirs and orchestras to belt out the old revolutionary songs with gusto. The exercise area in the northeast of the park has some of Beijing's best people-watching, where you might catch sight of a septuagenarian twirling on gymnastics bars, and other feats of athleticism.