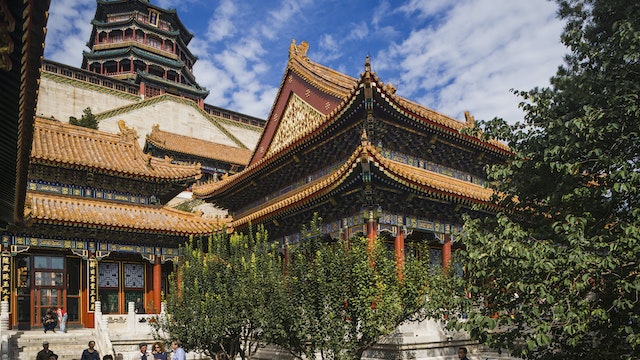 A marvel of Chinese garden design and one of Beijing's must-see attractions, the Summer Palace was the royal retreat for emperors fleeing the suffocating summer torpor of the old imperial city and, most recently, it was the retirement playground of Empress Dowager Cixi. It merits an entire day’s exploration, although a (high-paced) morning or afternoon exploring its waterways, pavilions, bridges and temples may suffice.

The domain had long been a royal garden before being considerably enlarged and embellished by Emperor Qianlong in the 18th century. He marshalled an army of labourers to deepen and expand Kunming Lake (昆明湖; Kunming Hú), originally a reservoir dug in the Yuan dynasty, and reputedly surveyed imperial navy drills from a hilltop perch.

Anglo-French troops vandalised the palace at the end of the Second Opium War in 1860. Empress Dowager Cixi launched into a refit in 1888 with money earmarked for a modern navy; the marble boat at the northern edge of the lake was her only nautical, albeit quite unsinkable, concession. Foreign troops, angered by the Boxer Rebellion, had another go at torching the Summer Palace in 1900, prompting further restoration work. By 1949 the palace had once more fallen into disrepair, eliciting a major overhaul.

Glittering Kunming Lake swallows up three-quarters of the park, overlooked by Longevity Hill (万寿山, Wànshòu Shān), itself crowned by the eight-tiered Tower of Buddhist Incense, the most elaborate and expensive restoration project of Cixi's grand redesign. Arranged on a north–south axis, the tower rises up behind the Hall of Dispelling Clouds, built by Emperor Qianlong for his mother on her 60th birthday. At the foot of Longevity Hill, hugging the north shore of the lake, is the Long Corridor, a canopied, 728m-long ornamental walkway. Thousands of artworks adorn every crossbeam, column and ceiling arch, depicting scenic views from around China, much-loved myths, Buddhist scenes and folk tales.

At the western end of the Long Corridor is Cixi's Marble Boat, a place to entertain (and a common garden design motif), while at the eastern end are her living quarters, the Hall of Joy and Longevity, which echoes the sìhéyuàn layout of traditional Beijing courtyards, and still contains dusty Qing-era furniture. Continue east to the three-storey Grand Theatre where Cixi would enjoy her beloved Peking opera. Nearby, the Hall of Benevolence and Longevity was where the empress dowager still pulled the government strings late into her official retirement. Glimpse the grand throne within; the rockery outside was designed to mimic the famous Lion Grove Garden in Suzhou. Note also the dragon and phoenix statues in the courtyard, the symbolic embodiment of emperor and empress. Here it's the phoenix that commands centre spot, a clear sign that a woman – Cixi – was running the show.

If time permits, try to do a circuit of the lake along the West Causeway. You can exit the palace via the West Gate, where you can pick up the Xiijiao Line back to the city, or return along the east shore. Based on the famous Su Causeway in Hangzhou, and lined with willow and mulberry trees, the causeway kicks off northwest of the Marble Boat. With its delightful moon hump, the Jade Belt Bridge dates from the reign of Emperor Qianlong and crosses the point where the Jade River enters the lake (when it flows).

At the base of the rear of Longevity Hill is Suzhou Street, built to mimic the waterways and architecture of the famous Jiangsu canal town. Here is where emperors and their concubines would pretend to be common folk by 'shopping' for trinkets in the ersatz stores that lined the shore, with eunuchs acting as shopkeepers. Today it's full of actual souvenir shops, which, ironically, makes it rather authentic.