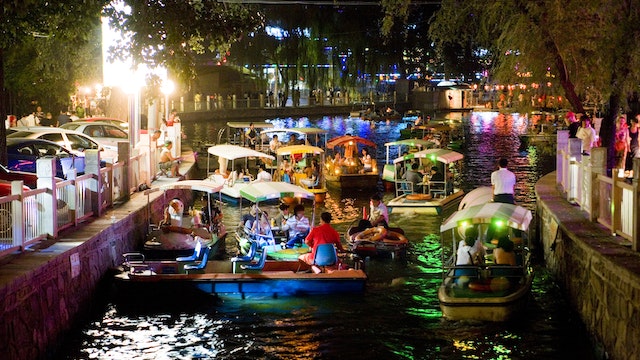 Technically called Shichahai (什刹海; Ten Temple Lakes) but referred to informally as Houhai, the three lakes flow southwards into Beihai and the off-limits government compound of Zhongnanhai (Middle and South Lakes), together comprising a swath of artificial lakes stretching 4.5km across the length of the old city.

The lakes date back to the Yuan dynasty and the canal system built by engineers to transport drinking water into the capital. Houhai once marked the northern terminus of the Grand Canal, and became a royal retreat during the Qing dynasty as Manchu nobles built their mansions around it, the most famous of which is Prince Gong’s Mansion.

There are pedal-boat hire stations around the shoreline of Houhai and Qianhai; snacks and cold beers can be picked up at lakeside stores for an impromptu picnic afloat. Some of the best people-watching can be had at the public exercise area on the north shore of Houhai, especially in winter when hardy locals take an ice-dip in the water. Rickshaw drivers ply the shoreline hawking 'hutong tours', though few speak English.

When the lakes freeze over (usually from mid-December to early March), Qianhai becomes an enormous ice-skating rink, separated into two zones. The larger one is given over to ice-trikes and chair sleds (great fun for kids), while the smaller section is for skaters. Expect to pay ¥80 to get on to the ice.