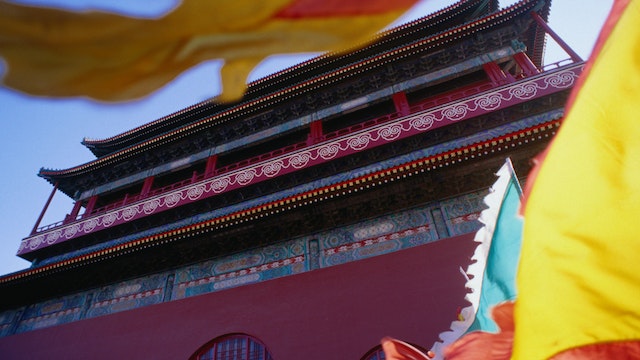 Venerable bastions of time-keeping, the Drum Tower and its counterpart the Bell Tower were for centuries the tallest buildings in Beijing, lording it over the surrounding hutong. Up in the 46m-high tower, the great drums would beat to sound the curfew after nightfall in the Qing dynasty, and thereafter every two hours to coordinate the patrols of the city's nightwatch. Climb the steep stairs to hear a touristy drumming performance every hour from 9.30am.

Originally built in 1272, the Drum Tower (and the Bell Tower to the north) are aligned on Beijing's central axis, at the heart of the former Mongol-led Yuan capital of Dàdū, as Beijing was then known. It was rebuilt by Emperor Yongle as part of his grand plan for Ming dynasty Beijing. Since then it has been destroyed and rebuilt several times (the current edition dates to around 1894).

In 1924, after Puyi (the 'Last Emperor') had been evicted from the Forbidden City, the timekeeping functions of the towers ceased. The Drum Tower became a library for a time, and the Bell Tower a cinema.

Accessed by a very steep stairway, the tower itself preserves the Night Watchman’s Drum (更鼓, Gēnggǔ), the sole survivor of the original watch drums. A drumming troupe bashes out rhythms on a set of replica drums every hour from 9.30am, with the last performance at 4.45pm (and no lunchtime performance at 12.30pm).

The original drummers would have known exactly when to bash their instruments thanks to a water clock (clepsydra), a copy of which is on display in the tower.