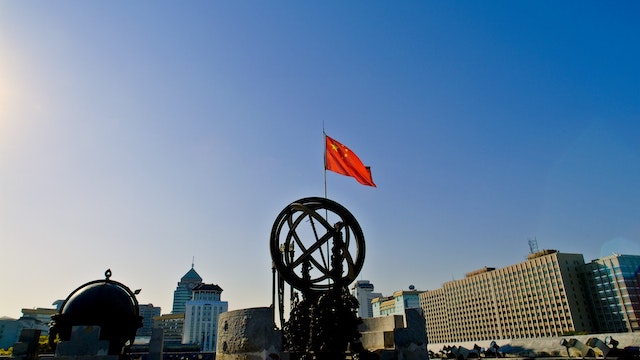 Astronomers have been studying the mysteries of the cosmos here since 1442. Crowning the 18m-high brick tower – an earlier version of which would have been attached to Beijing's city wall during the Ming dynasty – is a mind-boggling array of arcane astronomical instruments, made in brass, mounted on carved stone plinths and embellished with bronze dragons.

These include the deliciously named 'Altazimuth quadrant', which calculates the zenith distance of stars, one of six grand contraptions designed by Ferdinand Verbiest, a 17th-century Jesuit missionary from Belgium. He was awarded the honour of managing the observatory by Emperor Kangxi after proving the greater accuracy of European astronomy and correcting flaws in the Chinese calendar (which necessitated removing an entire month).

The observatory actually dates back further to the Mongol-led Yuan dynasty, when it lay north of the present site. Kublai Khan, like subsequent Ming and Qing emperors, relied heavily on astronomers to plan military endeavours. This era also produced several celebrated Chinese astronomers, including Guo Shoujing, who developed the Chinese calendar and calculated a year precisely to 365.2425 days.

The observatory was looted by the allied forces after the Boxer Rebellion in 1900, and several instruments were removed to the French Legation and to Germany, but these were later returned. The instruments went on the move again in 1931, this time to Nanjing, but were reinstated here after the foundation of the PRC. During the construction of Beijing's subway, it was proposed to demolish the observatory, but Zhou Enlai intervened. In 1979 the tower partially collapsed due to neglect, and was restored in 1982.

At ground level is a courtyard flanked by halls housing mildly diverting astrological exhibits. Also here are busts of Verbiest, Guo Shoujing and other astronomers, along with yet more arcane instruments, including a replica of a Ming armillary sphere supported by four dragons.