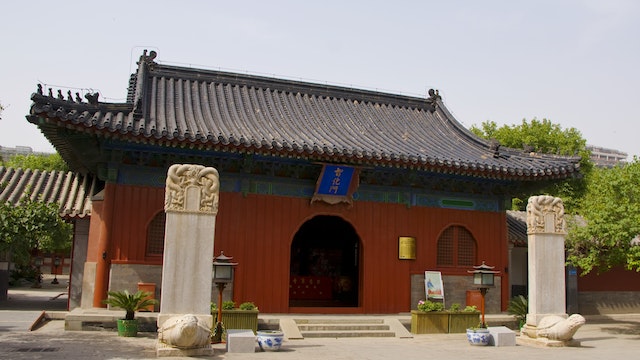 Lost in a tumbledown hutong neighbourhood, this Buddhist temple is one of Beijing's best-preserved Ming dynasty structures. It was built in 1444 to honour a corrupt and powerful eunuch, Wang Zhen, who held tremendous sway over the guileless Emperor Zhengtong. Remarkable treasures within include the Ten Thousand Buddhas Hall with floor-to-ceiling wall niches filled with miniature Buddhist effigies.

You won’t find the coffered vault ceiling of the Zhihua Hall (it’s in the USA), and the Four Heavenly Kings have vanished from Zhihua Gate, but the Scriptures Hall, to the west of the central courtyard, encases a spectacular, eight-sided zhuǎnlún zàng (转轮藏), a rotating scriptures cabinet mounted on a marble base, crowned with animal carvings and a seated Buddha beneath a mandala fresco.

The Ten Thousand Buddhas Hall is at the far rear of the complex, dominated by a trio of wood-carved deities (a 20ft-tall Tathagata Buddha, flanked by Brahma and Indra). Unfortunately, visitors are no longer allowed to climb to the 2nd floor, which houses a seated Buddha.

Time your visit to coincide with a short musical performance, taking place in Zhihua Hall at 10am and 3pm daily. Performers use traditional Chinese instruments associated with Buddhist worship.

Following renovations in 2018, the temple has added several museum displays to its offerings, including notes on temple construction and restoration over the years, and an exhibit on jing religious music.