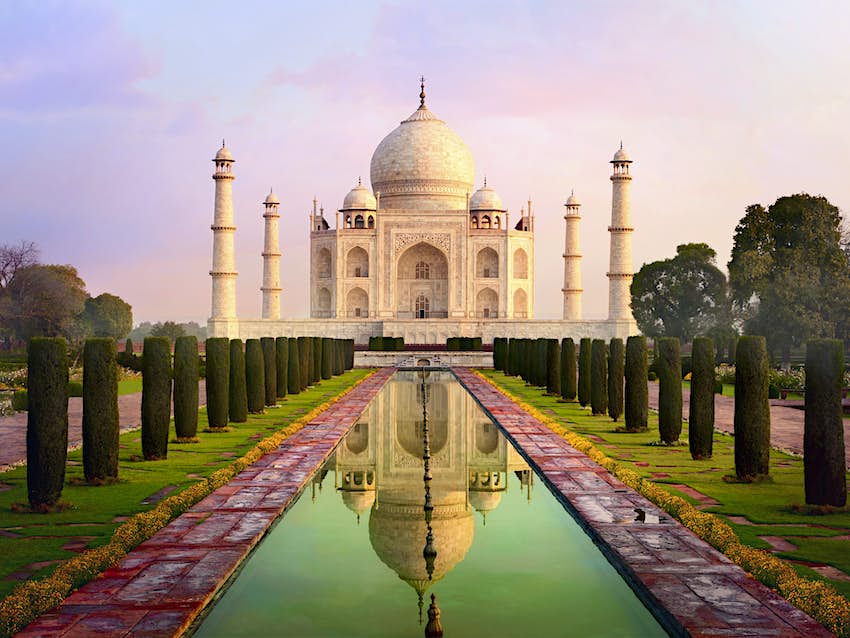 Gazing on the architectural perfection of the Taj Mahal is one of India’s most iconic experiences. Indeed, it’s often the first place people visit after landing in Delhi. In a country studded with magnificent Mughal tombs, the Taj stands out as something special – the perfect marriage of design, craftsmanship and symmetry.

Here is an introduction to the history and legends surrounding India’s most famous building, and tips for making the trip of a lifetime.

What is the Taj Mahal?

It’s often described as the greatest monument built for love, but the Taj Mahal is actually a memorial to tragedy. When Mumtaz Mahal, the chief consort of the Mughal emperor Shah Jahan, died in childbirth in 1631, the heartbroken emperor devoted years and a considerable fortune to constructing a tomb worthy of his great love.

The mausoleum was finally completed after two years of painstaking chiselling and carving by the most skilled craftsmen in the Mughal empire, and the queen consort was interred inside in a private chamber at the heart of the monument. Shah Jahan was later buried alongside his wife when he died in 1666.

Did you know this about the Taj Mahal?

While the Mughals went on to build hundreds of other tombs, palaces and fortresses across India, nothing would come close to the perfect symmetry and other-worldly brilliance of the Taj. Today, it’s the most famous sight in India, and arguably the most famous building in the world.

Special features of the Taj Mahal

The rediscovery of the "moonlight garden" – built across the river from the tomb but later buried by silt – hints at religious connotations to the Taj’s riverfront location, with the tomb’s eight rooms representing the hasht bihisht (eight paradises) and the Yamuna representing the rivers of milk and honey that wait for the virtuous.

From its gleaming domes to its delicate marble screens and towering minarets, the Taj shows perfect bilateral symmetry along an axis running through the center of the main dome. The only break in symmetry is found in the burial chamber, where the grave of Shah Jahan sits just to one side of the grave of Mumtaz Mahal set at the geometric centre of the monument.

The Taj isn’t the only Mughal monument to feature pietra dura – intricate inlay work, made from semi-precious stones – but it is unquestionably the finest. While it shines brilliant white from a distance, up close the Taj is adorned with an elegant tracery of filigree scrollwork, leaves, flowers and Islamic motifs, executed in marble, jasper, lapis lazuli, carnelian, malachite and other colored stones.

The four pishtaqs (arched recesses) on the four sides of the Taj are framed by passages from the Quran, executed in intricate calligraphy made from strips of jasper inlaid into marble panels. The script increases in size as it climbs the walls of the monument, but appears to be a uniform size when viewed from the ground.

The ornamental Islamic gardens surrounding the Taj are just as big an attraction for many. Both the main gardens inside the complex and the moonlight garden across the river are built to mirror the charbagh, the four gardens of heaven, with flowerbeds shaped like the rub el hizb (Islamic star) and water features splitting each into four equal parts.

While the inlaid marble cenotaphs of the royal couple stand in an elegant space beneath the main dome, shielded by an octagonal perforated screen, the actual graves of the emperor and his wife are hidden in an underground vault that has been closed to the public since the tomb was constructed.

Although they were never used for this purpose, the four towers marking the corners of the tomb were built as working minarets, with stairways and balconies allowing a muezzin to call the faithful to prayer. If you look closely, you’ll notice that the minarets are angled slightly outwards, allowing the towers to collapse away from the mausoleum in the event of an earthquake.

To the west of the mausoleum is an elegant red sandstone mosque that is still in use today, with two low minarets that sit almost flush with its roofline, so as not to distract from the grandeur of the Taj. The identical building on the east side of the tomb was constructed purely for symmetry; it was not suitable for prayer as it faces away from Mecca.

The story of the Taj Mahal

The Taj didn’t spring into the world fully formed from the imaginations of its architects. Instead, it was the product of a generations-long process of architectural evolution, running throughout the Mughal period, with a string of earlier tombs marking the progress towards funereal perfection.

Agra’s Itimad-ud-Daulah, built for Mumtaz Mahal’s grandfather in 1622, features many of the same design elements as the Taj Mahal, but lacks its finesse and perfect proportions. The nearby tomb of the emperor Akbar, built in 1605, was another imperfect Taj prototype, making similar use of ornamental minarets and white marble inlays. However, both monuments were merely refinements of architectural ideas first established by the tomb of Humayun, constructed in Delhi in 1569.

All sorts of myths have grown up around the Taj and its construction. It’s claimed, for example, that the craftsmen who built it were horribly mutilated so they could never build anything so beautiful again – though there’s no historical evidence for this gruesome rumor. The same applies to the tale that Shah Jahan planned to build a mirror-image 'Black Taj Mahal' on the opposite bank of the Yamuna River.

One story that is definitely true is that Shah Jahan was imprisoned in Agra Fort by his son, Aurangzeb, in a chamber with a view of the Taj Mahal. It’s also true that the Taj is tilting ever so slightly, as the changing flow of the Yamuna River has dried the soil beneath its foundations; we’re some centuries away from a Leaning Taj of Agra, however!

The allegation that the Taj was originally a Hindu temple is a thornier issue; although no physical evidence has been discovered, many other Mughal monuments were built over the top of desecrated Hindu temples, and the story has become a cause célèbre for Hindu nationalists.

The Taj still shimmers like it did in 1633, but the marble doesn’t stay this gleaming white all by itself. With the annual onslaught of the monsoon rains and Agra’s notorious pollution, the monument has become notably discoloured, prompting restorers to clean the marble with "face packs" made from a fine clay that absorbs stains and other pollutants.

Planning your trip to the Taj Mahal

- Best time to go: It is possible to visit the Taj Mahal year round, but it’s much more pleasant to explore the monument during the dry winter months, from October to March. From April to May temperatures soar, and the skies open up for the monsoon from May to September. However, it is currently closed due to COVID-19.

- How long you’ll need: Allow at least three hours to explore the mausoleum, gardens and outlying buildings. Add in nearby Agra Fort and you’ll easily fill a day.

- Opening hours: Open from dawn to dusk, from Saturday to Thursday (the complex is reserved for worshippers on Fridays). If you want to beat the crowds, arrive just before sunrise so you can be first through the doors.

- Costs: International visitors pay Rs 1100 entry, plus an optional Rs 200 to enter the mausoleum. For Indian visitors, entry is just Rs 50. There’s no charge for using a still camera but for video cameras, there’s a Rs 25 fee.

- Where to stay: Accommodation close to the monument in the Taj Ganj district comes at a premium, but you might sneak a view of the Taj from the hotel rooftop, or even your room. For a calmer experience, consider staying near Sadar Bazaar or Fatehabad Road.

- Getting around: Rickshaw and autorickshaw drivers in Agra are notorious for charging elevated rates; haggle firmly for a fair price before you set off. Taxis are also available, but prices are high; try booking through the Ola app for a lower fare. Many would-be guides at the Taj are scammers; official guides are best arranged through the tourist office in Agra.

- Etiquette: The Taj Mahal is an active place of worship, so dress respectfully. Wear clothing that covers the upper arms and legs, and try not to be intrusive with your camera. Photos are prohibited inside the mausoleum, and tripods are banned completely. There are separate lines for men and women; food and tobacco are banned from the complex, and bags must be left in free lockers at the west gate.

3 min read • Published about 13 hours ago

9 min read • Published about 14 hours ago

These 10 Albuquerque parks are a breath of fresh air

3 min read • Published about 15 hours ago