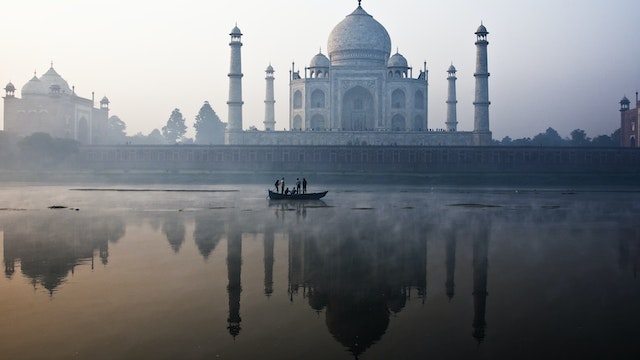 Poet Rabindranath Tagore described it as 'a teardrop on the cheek of eternity'; Rudyard Kipling as 'the embodiment of all things pure'; while its creator, Emperor Shah Jahan, said it made 'the sun and the moon shed tears from their eyes'. Every year, tourists numbering more than twice the population of Agra pass through its gates to catch a once-in-a-lifetime glimpse of what is widely considered the most beautiful building in the world. Few leave disappointed.

The Taj was built by Shah Jahan as a memorial for his third wife, Mumtaz Mahal, who died giving birth to their 14th child in 1631. The death of Mumtaz left the emperor so heartbroken that his hair is said to have turned grey virtually overnight. Construction of the Taj began the following year; although the main building is thought to have been built in eight years, the whole complex was not completed until 1653. Not long after it was finished, Shah Jahan was overthrown by his son Aurangzeb and imprisoned in Agra Fort, where for the rest of his days he could only gaze out at his creation through a window. Following his death in 1666, Shah Jahan was buried here alongside his beloved Mumtaz.

In total, some 20,000 people from India and Central Asia worked on the building. Specialists were brought in from as far away as Europe to produce the exquisite marble screens and pietra dura (marble inlay work) made with thousands of semiprecious stones.

The Taj was designated a World Heritage Site in 1983 and looks nearly as immaculate today as when it was first constructed – though it underwent a huge restoration project in the early 20th century.

Note: the Taj is closed every Friday to anyone not attending prayers at the mosque.

The Taj can be accessed through the west and east gates. The south gate was closed to visitors in 2018 for security concerns but can be used to exit the Taj. The east gate generally has shorter queues. There are separate queues for men and women at both gates. If you are a foreigner, once you get your ticket, you can skip ahead of the lines of Indians waiting to get in – one perk of your pricey entry fee. It's possible to buy your tickets online in advance at https://asi.payumoney.com (you'll get a ₹50 discount for your troubles), but you won't save much time as you still have to join the main security queue. A ticket that includes entrance to the mausoleum itself cost ₹200 extra.

Cameras and videos are permitted, but you can't take photographs inside the mausoleum itself. Tripods are banned.

Remember to retrieve your free 500ml bottle of water and shoe covers (included in Taj ticket price). If you keep your ticket, you get small entry-fee discounts when visiting Agra Fort, Fatehpur Sikri, Akbar's Tomb or the Itimad-ud-Daulah on the same day. Bags much bigger than a money pouch are not allowed inside; free bag storage is available. Any food or tobacco will be confiscated when you go through security, as will pens.

From both the east and west gates you first enter a monumental inner courtyard with an impressive 30m red-sandstone gateway on the south side.

The ornamental gardens are set out along classical Mughal charbagh (formal Persian garden) lines – a square quartered by watercourses, with an ornamental marble plinth at its centre. When the fountains are not flowing, the Taj is beautifully reflected in the water.

The Taj Mahal itself stands on a raised marble platform at the northern end of the ornamental gardens, with its back to the Yamuna River. Its raised position means that the backdrop is only sky – a masterstroke of design. Purely decorative 40m-high white minarets grace each corner of the platform. After more than three centuries they are not quite perpendicular, but they may have been designed to lean slightly outwards so that in the event of an earthquake they would fall away from the precious Taj. The red-sandstone mosque to the west is an important gathering place for Agra's Muslims. The identical building to the east, the jawab, was built for symmetry.

The central Taj structure is made of semitranslucent white marble, carved with flowers and inlaid with thousands of semiprecious stones in beautiful patterns. A perfect exercise in symmetry, the four identical faces of the Taj feature impressive vaulted arches embellished with pietra dura scrollwork and quotations from the Quran in a style of calligraphy using inlaid jasper. The whole structure is topped off by four small domes surrounding the famous bulbous central dome.

Directly below the main dome is the Cenotaph of Mumtaz Mahal, an elaborate false tomb surrounded by an exquisite perforated marble screen inlaid with dozens of different types of semiprecious stones. Beside it, offsetting the symmetry of the Taj, is the Cenotaph of Shah Jahan, who was interred here with little ceremony by his usurping son Aurangzeb in 1666. Light is admitted into the central chamber by finely cut marble screens.

The real tombs of Mumtaz Mahal and Shah Jahan are in a basement room below the main chamber.