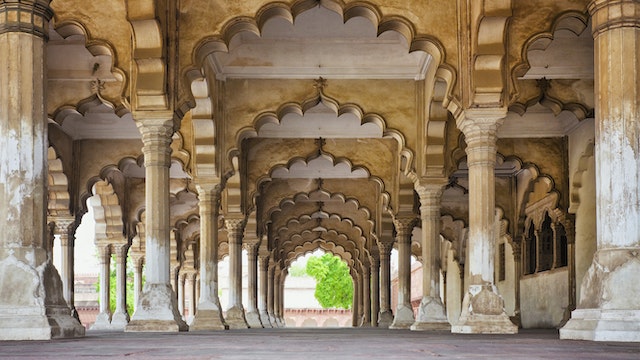 With the Taj Mahal overshadowing it, one can easily forget that Agra has one of the finest Mughal forts in India. Walking through courtyard after courtyard of this palatial red-sandstone and marble fortress, your amazement grows as the scale of what was built here begins to sink in.

Construction along the bank of the Yamuna River was begun by Emperor Akbar in 1565 on the site of an earlier fort. Further additions were made, particularly by his grandson Shah Jahan, using his favourite building material – white marble. The fort was built primarily as a military structure, but Shah Jahan transformed it into a palace, and later it became his gilded prison for eight years after his son Aurangzeb seized power in 1658.

The ear-shaped fort’s colossal double walls rise more than 20m and measure 2.5km in circumference. The Yamuna River originally flowed along the straight eastern edge of the fort, and the emperors had their own bathing ghats here. It contains a maze of buildings, forming a city within a city, including vast underground sections, though many of the structures were destroyed over the years by Nadir Shah, the Marathas, the Jats and finally the British, who used the fort as a garrison. Even today, much of the fort is used by the military and is off-limits to the general public.

The Amar Singh Gate to the south is the sole entry point to the fort these days and where you buy your entrance ticket. Its dogleg design was meant to confuse attackers who made it past the first line of defence – the crocodile-infested moat.

Following the plain processional way you reach a gateway and the huge red-sandstone Jehangir’s Palace on the right. In front of the palace is Hauz-i-Jehangir, a huge bowl carved out of a single block of stone, which was used for bathing. The palace was probably built by Akbar for his son Jehangir. With tall stone pillars and corner brackets, it blends Indian and Central Asian architectural styles, a reminder of the Mughals’ Turkestani cultural roots.

Further along the eastern edge of the fort you’ll find the Khas Mahal, a beautiful marble pavilion and pool that formed the living quarters of Shah Jahan. Taj views are framed in the ornate marble grills.

The large courtyard here is Anguri Bagh, a garden that has been brought back to life in recent years. In the courtyard is an innocuous-looking entrance – now locked – that leads down a flight of stairs into a two-storey labyrinth of underground rooms and passageways where Akbar used to keep his 500-strong harem. On the northeast corner of the courtyard you can get a glimpse of the Shish Mahal (Mirror Palace), with walls inlaid with tiny mirrors.

Just to the north of the Khas Mahal is the Mathamman (Shah) Burj, the wonderful white-marble octagonal tower and palace where Shah Jahan was imprisoned for eight years until his death in 1666, and from where he could gaze out at the Taj Mahal, the tomb of his wife. When he died, Shah Jahan’s body was taken from here by boat to the Taj. The now-closed Mina Masjid served as Shah Jahan's private mosque.

As you enter the large courtyard, along the eastern wall of the fort, is Diwan-i-Khas (Hall of Private Audiences), which was reserved for important dignitaries or foreign representatives. The hall once housed Shah Jahan’s legendary Peacock Throne, which was inset with precious stones – including the famous Koh-i-noor diamond. The throne was taken to Delhi by Aurangzeb, then to Iran in 1739 by Nadir Shah and dismantled after his assassination in 1747. Overlooking the river and the distant Taj Mahal is Takhti-i-Jehangir, a huge slab of black rock with an inscription around the edge. The throne that stood here was made for Jehangir when he was Prince Salim.

Following the north side of the courtyard a side door leads to the tiny but exquisite white-marbled Nagina Masjid (Gem Mosque), built in 1635 by Shah Jahan for the ladies of the court. Down below was the Ladies’ Bazaar, where the court ladies bought their goods.

A hidden doorway near the mosque exit leads down to the scallop-shaped arches of the large, open Diwan-i-Am, which was used by Shah Jahan for domestic government business, and features a beautifully decorated throne room where the emperor listened to petitioners. In front of it is the small and rather incongruous grave of John Colvin, a lieutenant-governor of the northwest provinces who died of an illness while sheltering in the fort during the 1857 First War of Independence. To the north is the Moti Masjid, currently off limits to visitors. From here head back to the Amar Singh gate.