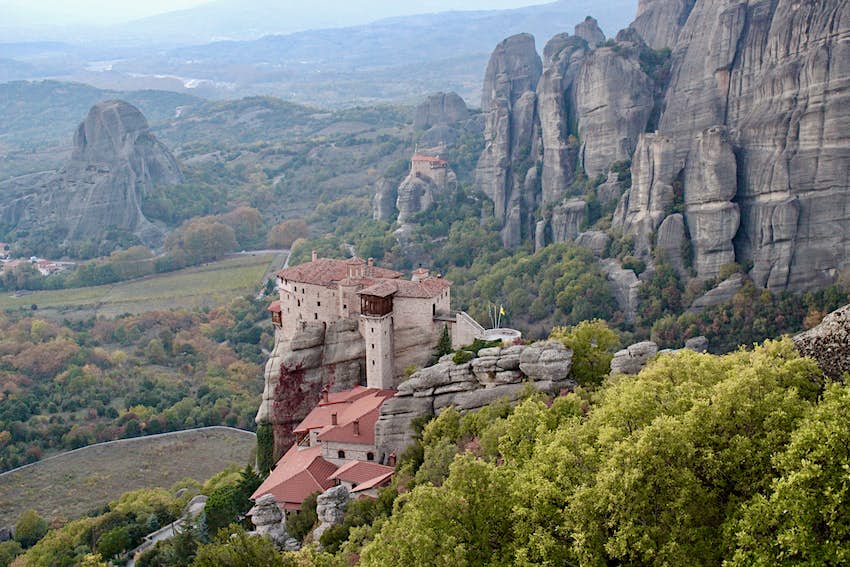 Mention Greece and many travelers immediately think of Santorini, Mykonos, or another gem hidden amidst turquoise waters, studded with white stucco buildings and punctuated by hidden cove beaches. But the Greek islands aren’t the only places worth spending your hard-earned vacation days and dollars.

Travelers may be especially keen to add Hellenic sites to their future itineraries after perusing virtual offerings like Greece From Home or after hearing that Greece is considering reopening hotels in July. But you don't need to crowd into Athens or the archipelago's beaches to see the best of this ancient country or sample its many delicacies and drinks.

Here are four regions in mainland Greece that will impress you with their history, scenery, and a great mix of things to see and do. They've been here for centuries, and aren't going anywhere any time soon.

Ioannina makes a perfect base for exploring the northwestern region of Epirus. The city traces its origins to 6th century AD as an important Byzantine Empire border town and, later, as the site of largely peaceful cohabitation of the Muslim, Christian and Romaniote Jewish populations. One example of the later is the Ioannina castle Its Kale, the oldest Byzantine fortress in Greece. It contains the tomb of Ali Pasha, the city’s Ottoman ruler as well as an old synagogue within its walls.

Outside the city explore Zagarochoria, a cluster of 46 traditional stone villages in the Pindus mountains. On the route from Aristi to Megalo Papigo, stop to admire the ruins of the Panagia Spileotisas Monastery. To reach them, you'll leave the parking area behind to wind along a stone path through a virgin forest. In Megalo Papigo, enjoy a glass of homemade cherry juice at the Sterna before walking (or driving) to Mikro Papigo, with an intermediary stop at the Papingo Rock Pools.

In Vitsa, have lunch at the Kanela & Garyfallo, a mushroom-themed restaurant with a unique menu created by the chef and owner Vassilis Katsoupas. Continue down the main road past Monodendri until Oxia, a platform with breathtaking views over Vikos gorge, the world’s deepest canyon of its width. As you drive between villages lookout for old stone-arched bridges; one of them – the Kokkoros bridge between Dilofo and Kapesovo – is right by the main road.

Northwest of Ioannina, visit the village of Zitsa. At the Domaine Glinavos try the “orange wine”, orange in color semi-sparkling from the Debina grape, made to resurrect the old-world wine of the region. Visit the Municipal Engraving Gallery with its rich collection of engravings by Greek artists and don’t leave the village without dropping by the Bakery of the Village, run by American-Greek duo, Anna and Kostas. Their walnut-chocolate cookies are made with fresh orange juice squeezed on the premises. On the way back to Ioannina, stop at the Stala Beer (by appointment), one of the newer and up-and-coming artisanal beer makers of the region.

Situated in central Greece and characterized by a collection of tall rock pillars that formed some 25 million years ago as the water left the area, Meteora began attracting hermits and ascetics in the 11th century. They came for the seclusion, building hermitages in high altitude caves and establishing Meteora as the site for solitary and spiritual life. Although only six monasteries remain active out of the 41 that existed over the centuries, today Meteora is still Greece’s second-largest monastic complex after Mount Athos.

Each monastery occupies its own pillar, some rising as high as 600 meters (1969 feet) in the air and appearing as if they emerge from the stone. The Monastery of Great Meteoron, the largest of the six, houses the Museum of Greek History, and the bell tower of St Nicholas Anapafsas allows for sweeping views over the Thessaly plain. To access all but St Stephan monastery you’ll need to scale a few steps, but that’s still easier than climbing the rocks like the monks who built them.

To follow in the footsteps of those original rock climbers, hire a guide and visit inaccessible caves and hermitages – or admire them from below on a hike through the area. Don’t leave Meteora without taking in the sunset, either. Find a rock between the Monastery of Holy Trinity and Rousanou Monastery for the best view.

In 1823, the eastern Peloponnese city of Nafplio became the first capital of a newly independent Greece. That status lasted only a little over a decade, but Nafplio’s importance as the Argolic Gulf’s strategic metropolis goes back centuries – Romans, Byzantines, Venetians, and Ottomans all laid claim to this city.

Stroll the narrow, cobblestone alleys of the old town for a glimpse into Nafplio’s Venetian and Ottoman past, visit its Archeological Museum for an insight into its Mycenaean-era history, and explore its three famous fortresses. Climb the 900+ steps – or take a taxi – to the Palamidi fortress, an 18th-century masterpiece of the Venetian military construction. Check out the Akronafplia fortress with remnants of old walls going back as far as the Bronze Age, then catch a boat to the Bourtzi Castle. Bourtzi is one of Nafplio’s most photographed landmarks, located on its own, tiny islet off the harbor.

On the way out of the city, visit the Epidavros Theater, one of Greece’s best-preserved ancient structures. Plays are still performed there as part of the summer Athens & Epidavros Festival. En route back to Athens stop by the Silo Art Factory, a warehouse full of artist Stelios Maragos’s creations. You’ll recognize it by a tall Trojan horse in front made entirely from recycled materials.

Often called “the Gibraltar of the East,” the fortified town of Monemvasia sits atop its own island, connected to the mainland by a short causeway. Founded in the 6th century, the town changed hands many times – look for the evidence of its architectural mélange of influences as you walk the main cobblestone street that cuts through the city or explore the narrow alleyways and winding stairways of the lower town. The moment you pass through the gates you’ll be transported through time to when Monemvasia was home to first Byzantine, then Venetian, and then Ottoman rule.

A well-preserved 13th-century Elkomenos Christos Cathedral on the main square is worth a visit, as is the Monemvasia Archeological Collection housed in a former mosque. The upper town is a steep climb but the view of the town’s ceramic rooftops against the blue of the Myrtoan Sea will make up for it. Perched on a cliff the 12th century Church of Agia Sofia is a mix of Byzantine and Venetian architecture and has an octagonal dome that’s considered one of the most beautiful of its kind.

As an important commercial outpost, Monemvasia may have also been the source of the first international wine brand. Known today as Malvasia in Italy, Malvoisie in France, Malmsey in Portugal, and Monemvasia in Greece, the wine is believed to have originated in Crete but because it was loaded on ships in Monemvasia – or Malvasia for the Venetians – it carried the name of the city.

Knowledge of how Monemvasia was produced was lost during Ottoman rule, but today the local winemakers are attempting to bring it back; you can taste the modern version at the Monemvasia Winery. En route back to Athens, stop by Stamatakos Olive Oil, a family-owned organic olive oil producer specializing in high-phenolic olive oil, to refresh your palette.

Acropolis view to be restored after hotel ordered to demolish top floors
From Homer to the Durrells: a literary guide to Greece
Top five things to do in Greece in winter

9 min read • Published about 7 hours ago