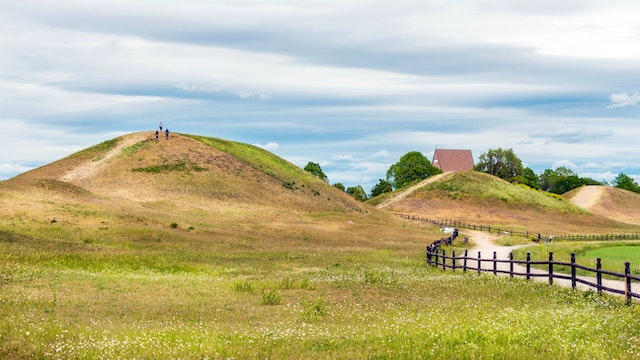 One of Sweden’s largest and most important burial sites, Gamla Uppsala (4km north of Uppsala) contains 300 mounds from the 6th to 12th centuries. The earliest are also the three most impressive. Legend has it they contain the pre-Viking kings Aun, Egil and Adils, who appear in Beowulf and Icelandic historian Snorre Sturlason’s Ynglingsaga. More recent evidence suggests the occupant of Östhögen (East Mound) was a woman, probably a female regent in her 20s or 30s.

According to Olof Rudbeck’s 1679 book Atlantica, Gamla Uppsala was the seat of Western culture. Rudbeck (1630–1702), a scientist, writer and all-around colourful character, amassed copious evidence proving that Old Uppsala was, in fact, the mythical lost city of Atlantis. In retrospect this seems unlikely, but the area is a fascinating attraction nevertheless. You can learn more in the adjoining Gamla Uppsala Museum, or wander on your own; there are informative plaques throughout the site.

Speculation has surrounded the burial site from the beginning. Early press reports include that of medieval chronicler Adam of Bremen – who never actually visited – describing a vast golden temple in Gamla Uppsala in the 10th century. Allegedly, animal and human sacrifices were strung up in a sacred grove outside.

When Christianity arrived around 1090, Thor, Odin and the other Viking gods began to fade. From 1164, the archbishop of Uppsala had his seat in a cathedral on the site of the present church.

If you feel like a stroll or a bicycle ride, Eriksleden is a 6km ‘pilgrims path’ between the cathedral in Uppsala and the church in Gamla Uppsala. Its namesake, Erik the Holy, was king of Sweden from around 1150 until the Danes beheaded him 10 years later. The story is that his head rolled down the hill, and where it stopped a spring came up. The main trail also provides access to a ridged wilderness area called Tunåsen, with a panoramic viewpoint (follow signs along Eriksleden just south of Gamla Uppsala to ‘utsiktsleden’).