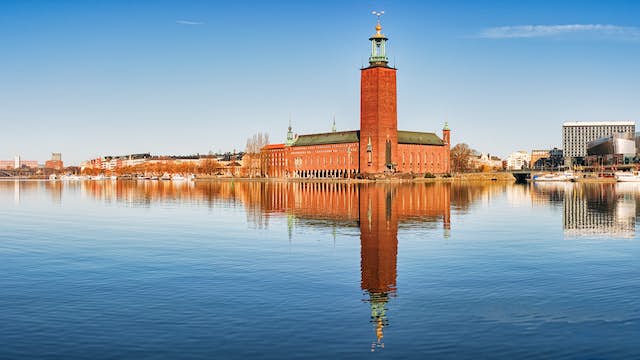 The imposing Stadshuset (City Hall) defines the Stockholm skyline, with its blocky silhouette and waterside perch. It looks stern and weighty from afar, but inside it's secretly aglitter, with the famous Golden Hall, delightful frescoes by Prins Eugen and the inspiring Nobel Prize banquet room. Not to mention the concrete platform out front is a favorite diving spot on a hot summer day.

Built using about eight million bricks, Stadshuset was designed by architect Ragnar Östberg, a proponent of the Swedish National Romantic style, and opened in 1923. Aside from serving as a striking landmark, it holds the offices of more than 200 government workers, as well as its better-known banquet halls and courtyards. It is the main attraction in the friendly, low-key neighborhood of Kungsholmen, which historically has been ignored by tourists but these days has a lot of appeal due to its mellow dining scene and beautiful waterfront paths.

Atop the building’s 106m-high tower is a golden spire featuring the heraldic symbol of Swedish power: the three royal crowns. Entry is by guided tour only and tours in English take place every 30 to 40 minutes between 9.30am and 4pm in summer, less frequently the rest of the year. There are stellar views and it’s a great thigh workout. If you’re not sure you’re up for walking 106m worth of stairs, there’s an elevator that will take you halfway to the top.

Nestled in the center of Stadshuset is the glittering, mosaic-lined Gyllene Salen (Golden Hall). The beguiling mosaics, made from 19 million bits of gold leaf, are by Einar Forseth (1892–1988). The post-Nobel banquet dancing and festivities happen here.

Prins Eugen, who became a successful artist and was a generous patron of the arts, donated his own fresco painting of the lake view from the gallery, The City on the Water, which can be seen along one wall in the Prince’s Gallery. Along the other wall are windows opening onto an impressive real-life version of the city on the water.

Don’t neglect the lovely park abreast of Stadshuset, pretty in all seasons, with its views of Riddarholmen across the water. Two statues by Carl Eldh guard the steps, and Christian Eriksson’s Engelbrekt the Freedom Fighter graces a pillar in the corner of the park. If the weather’s warm, do as Stockholmers do and take a swim or sunbathe on the concrete platform.

You can dine like a Nobel Prize winner in Stadshuset's basement restaurant, Stadshuskällaren. Regular mains are mostly hearty traditional meat-and-veg courses; groups can order the Nobel Menu from any year they like, served on Nobel porcelain. Reservations are a must.