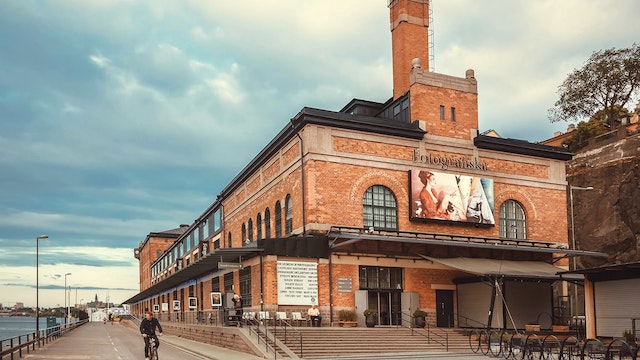 Since opening its doors in 2010, Fotografiska has become one of the world’s leading photography museums and one of Stockholm’s most popular attractions. Located along the quay on the north side of Södermalm, about 800m (0.5mi) from the Slussen metro station, the museum occupies an Art Nouveau building that was originally a customs house, built in 1906. The red-brick exterior remains original, while the interior has been converted into a series of galleries on two floors and an upper-level housing a restaurant and bistro/wine bar.

Fotografiska typically presents at least 20 different photography exhibitions per year, featuring a mix of well-known photographers and rising stars representing a variety of styles and techniques. Mattias Klum, Sebastião Salgado, Nick Brandt, and Annie Liebovitz are just a few of the big names who have had shows here.

The museum’s stated goal is to “inspire a more conscious world.” To this end, Fotografiska showcases photography that promotes engagement and shines a light on important issues while challenging viewers and raising questions about society and its norms.

Fotografiska also strives to be an international meeting space for practitioners and lovers of photography in all its varied forms. Through photography courses, artist lectures, a membership program, publications, and special events, the museum works to create community and stimulate discussion about the art of photography and its role in illuminating global issues and promoting change.

In the main lobby, accessible without a ticket, the museum store sells a diverse range of photography-related books, as well as posters, postcards and gift items.

Fotografiska’s restaurant, called simply Restaurangen, boasts one of the best views in Stockholm, across the water toward Kastellholmen, Skeppsholmen and Djurgården. Menu items change regularly and include dishes such as potatoes with browned butter, smoked sour cream, and seasonal roe or apple pizza with fennel and zero-waste apple sorbet. The focus is on plant-based seasonal menus with an emphasis on using all parts of raw ingredients, a philosophy that has earned the restaurant Guide Michelin’s Green Star award for sustainable gastronomy. The restaurant is open for dinner but typically closes for a few months in the summer.

Also on the top floor, Bistro Bread & Wine serves pizza, light entrees, nibbles, and drinks daily during daytime hours. As with the restaurant, the focus is on local sustainable producers. Both the restaurant and the bistro are currently accessible only in conjunction with a museum visit.

From late May through August, Fotografiska opens its outdoor restaurant, Verandan, located on the waterfront just outside the museum entrance. The menu includes wood-fired grill items and stone-oven pizzas made from seasonal local ingredients, as well as a wide selection of drinks. It’s open from 11 a.m. until late, making it a great place to savor Stockholm’s long summer hours of daylight.

Fotografiska is open from 10 a.m. to 11 p.m. daily. The museum uses dynamic pricing, with lower admission costs at less popular times. Tickets are available at the door but are cheaper if booked online in advance. Prices range from SEK 165 to 255 ($19-$29) for adults depending on time and day of the week. Seniors and students pay reduced rates, and children under 12 enter free of charge. Fridays and Saturdays are typically the most expensive; mornings and late evenings are generally the cheapest.

A ticket is valid for 90 minutes in the exhibit halls, which is plenty. Guided tours are offered regularly and can be booked in advance or upon arrival, subject to availability.

To get to Fotografiska, walk east from Slussen along Stadsgårdshamnen toward the cruise ferry terminal. Alternatively, take one of the hop-on-hop-off boats that travel between Gamla Stan, Nybroviken, Djurgården, Skeppsholmen, and Södermalm, stopping at Fotografiska. In July 2021 the museum launched its own electric boat service directly from Nybroviken, an initiative that is expected to continue in future summers.