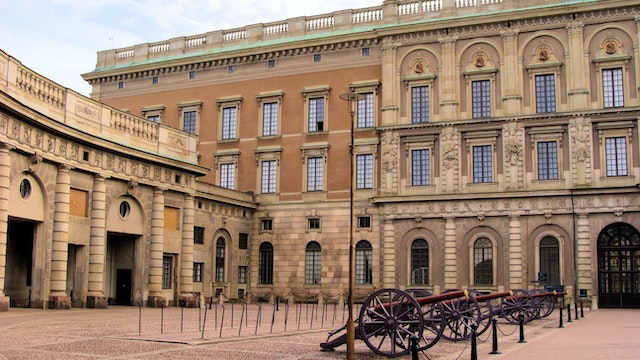 A massive structure with more than 600 rooms on 11 levels, Kungliga Slottet (the Royal Palace) dominates the north end of Gamla Stan. The official residence of the Swedish monarch, the palace is both a working government building and an important historical site with fine baroque and rococo interiors and furnishings that reflect the shifting tastes of nearly 400 years of royal occupants.

Around the mid-1200s, Birger Jarl, the powerful earl credited with founding Stockholm, erected a stone fortress on the site of the present royal palace. Under the Vasa rulers of the 16th and 17th centuries it developed into a magnificent Renaissance palace that became known as Tre Kronor for the three gilded crowns placed atop the main tower in 1588.

Following the Thirty Years War, which ended in 1648, Sweden entered an era of great power. Extensive rebuilding of the palace began in 1692 under the royal architect Nicodemus Tessin the younger, who gave the northern wing its current baroque appearance.

On 7 May 1697, a devastating fire broke out, destroying everything except the newly renovated north wing. Six weeks later Tessin presented designs for a new palace that he estimated would take six years to build. In fact, it would take nearly six decades before the royal family was finally able to take up residence.

Remnants of the original Tre Kronor palace can still be seen in the north wing, where Tessin simply covered over the medieval walls and towers as he erected his new baroque facade. Start your visit here to follow the palace’s history in chronological order.

Entering Museum Tre Kronor from Slottskajen, you pass through walls 5m (more than 16ft) thick that have stood since the 14th century. Inside, exhibits trace the development of Tre Kronor from defensive fortress to Renaissance palace, using models and objects rescued from the fire.

The Royal Apartments consist of a series of grand rooms used for royal receptions, gala dinners, cabinet meetings and other official state business, as well as more intimate living chambers. Every royal resident has left a mark on the interior design, beginning with King Adolf Fredrik and Queen Lovisa Ulrika, who moved into the newly completed palace in December 1754. They resided in the 14 rooms now called the Bernadotte wing after the present dynasty, which has occupied the throne since 1818. The last to live in these apartments were King Oscar II and Queen Sofia, whose portraits hang in the main gallery along with those of other Bernadotte family members.

The nine rooms comprising the State Apartments include the bedchamber where Gustav III died in 1792, two weeks after being shot at a masquerade ball; Karl XI’s Gallery, a gilded chamber modeled after the Hall of Mirrors at Versailles; and the Don Quixote Room, with walls covered in 18th-century tapestries depicting scenes from the classic novel by Miguel Cervantes. Another highlight is the Hall of State with Queen Kristina’s silver throne, a gift for her coronation in 1650.

Kungliga Slottet is open year round, except for major holidays. Parts of the palace may be closed at other times due to state functions; check the website for the latest details.

The monarchy’s greatest treasures are kept in underground vaults accessed through an entrance off Slottsbacken. They include crowns, swords and other symbols of state made for various royals in the 16th and 17th centuries.

The oldest items are the royal regalia, which include two swords of state belonging to Gustav Vasa, who came to power in 1523, and a jewel-studded gold crown, orb, scepter and key of state made for his son Erik XIV in 1561.

The last coronation held in Sweden was King Oscar II’s in 1873. His son Gustaf V inherited the throne in 1907 but declined to be formally crowned. Nowadays the regalia are used symbolically whenever a new monarch ascends to the throne, and at ceremonies such as royal baptisms, weddings and funerals.

Also on display is a silver baptismal font from 1696 that’s still used today, most recently in 2016 for the baptism of Prince Oscar, the son of Crown Princess Victoria and Prince Daniel.

Located in the northeastern wing of the palace, this museum displays ancient sculptures collected by Gustav III during an extended trip to Italy in the 1780s. The main gallery’s star attraction is a sculpture of Endymion, a beautiful mortal who was the lover of the moon goddess, Selene. Statues of the nine muses and various Roman gods and goddesses line both sides of the gallery. A second, smaller gallery houses a collection of Roman portrait busts.

The museum is open from mid-May to mid-September.

Although there has been a church at the palace since the 13th century, the present chapel was designed by Nicodemus Tessin and completed by architect Carl Hårleman as part of the rebuilding of the palace. The previous chapel had been inaugurated just five months before being destroyed in the fire.

The chapel is open to visitors during the summer.

The Changing of the Guard

If you can time your visit accordingly, don’t miss the changing of the guard ceremony, which takes place in the outer palace courtyard daily at 12.15pm (1.15pm on Sundays and holidays) and lasts approximately 40 minutes.

Every day from late April through August, the royal guards march or ride in formal procession through the streets of central Stockholm to the palace, an impressive sight in their blue uniforms and glittering pointed helmets. In September and October the parade takes place on Wednesdays, Saturdays and Sundays. Details of the route and timing are listed on the Swedish Armed Forces website.

A single ticket costs 140 SEK ($16) for adults and 70 SEK ($8) for children ages 7-17. and includes access to all the attractions in the Royal Palace complex, including Museum Tre Kronor, the Royal Apartments, the Royal Treasury, the Royal Chapel and Gustav III’s Museum of Antiquities. Tickets are available at the entrance and online in advance. Combination tickets are available for the palace and nearby Riddarholmskyrkan, the medieval church where almost all Swedish royals until 1950 are buried.

Guided tours of the Royal Apartments cost 30 SEK ($3.50) plus regular admission and are available in English at 10.30am and 1.30pm, with an additional English-language tour at 3.30pm from June through August. There’s no extra charge for the tour for children under 18 (regular admission tickets are required). Tours of the Royal Treasury in English take place at 2.30pm daily. Free audio guides to the Bernadotte Apartments and Gustav III’s Museum of Antiquities can be downloaded onto a smartphone or borrowed on site.

During the COVID-19 pandemic only the Royal Apartments are open to visitors, and tickets are timed. There are no guided tours, and only the download option is available for audio guides. The changing of the guard ceremony and parade are also not taking place during the pandemic.

The Royal Palace also houses Livrustkammaren (the Royal Armoury), a free museum that traces the history of the Swedish monarchy since 1523 through armor, clothing and other items that once belonged to various royals. It’s accessible through a separate entrance off Slottsbacken.