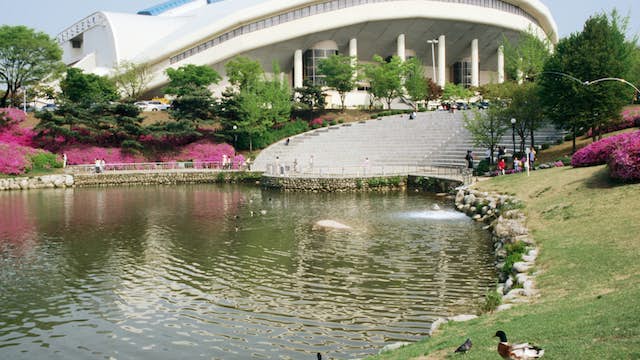 This large and pleasant park was the focus of the 1988 Olympics. Strolling its paths takes you past its stadiums surrounded by plenty of greenery, ponds and open-air sculptures. There's a gallery of modern art and two museums on the history of the Baekje dynasty. The park contains the remains of the Mongchon-toseong (Mongchon Fortress), an earth rampart surrounded by a moat, built in the 3rd century AD during the Baekje dynasty.

Attractions built for the 1988 Seoul Olympics include the indoor swimming pool, sometimes open to the public, tennis courts, three gymnasiums (gymnasium 1 hosts major concerts) and the velodrome. The latter is now used by punters who gamble on bicycle and even motor-boat races. On Wednesdays and Thursdays between March and December, motor boats race three times round a 600m course at Misari (20km east of Seoul) while gamblers watch the races on screens.

Scattered like buckshot around the park are over 200 sculptures, some larger than a house. Designed and made by sculptors from around the world, most of the artwork is puzzling even after reading the artists’ descriptions of their work. Groups picnic among the art and the trees.

The bunker-like SOMA has a tempting cafe and shop, a permanent display of Olympics-themed video art by Nam June Paik and five galleries for special exhibitions.

The Olympic Museum has screens showing the exciting highlights of the 1988 Seoul Olympics, together with a brief history of the Olympics.

Fast food, a convenience store and the excellent Seasons Table are at the World Peace Gate near the main entrance, where rollerbladers glide along on warm evenings and weekends.