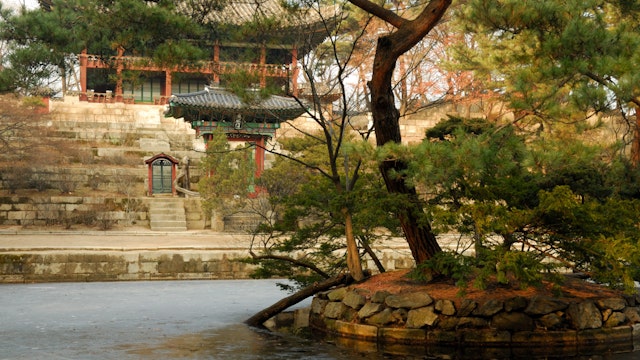 The World Heritage–listed Changdeokgung is the most beautiful of Seoul's five main palaces. You must join a one-hour guided tour to look around. English tours run at 10.15am and 1.15pm; if you don’t care about the commentary, Korean tours are at 9.30am, 11.30am and 3.30pm. To see the palace's lovely Huwon (Secret Garden), join tours at 10.30am, 11.30am and 2.30pm (also 3.30pm February to November). Book online or come early as the Huwon tours are restricted to 50 people at a time.

Changdeokgung was originally built in 1405 as a secondary palace, but when Gyeongbokgung (Seoul’s principal palace) was destroyed during the Japanese invasion in the 1590s, it became the primary royal residence until 1872. It remained in use well into the 20th century. Like all Joseon palaces, it has a mountain behind it and a small stream in front – good pungsu (feng shui).

Enter through the imposing gate Donhwamun. Dating from 1608 it is the largest such entrance among Seoul's four main palaces. Turn right and you'll cross over a stone bridge (built in 1414, thus the oldest such surviving bridge in the city) – note the guardian animals carved on its sides.

On the left is the beautiful main palace building, Injeongjeon. It sits in harmony with the paved courtyard, the open corridors and the trees behind it.

Next door are the government office buildings, including one with a blue-tiled roof. Further on are the private living quarters of the royal family. Peering inside the partially furnished rooms, you can feel what these Joseon palaces were like in their heyday – a bustling beehive buzzing round the king, full of gossip, intrigue and whispering.

Round the back is a terraced garden with decorative ondol chimneys. Over on the right is something completely different – Nakseonjae, built by King Heonjong (r 1834–49) in an austere Confucian style using unpainted wood. Royal descendants lived here until 1989.

Walk through the dense woodland and suddenly you come across the Huwon. Further on are a couple more ponds and Yeongyeongdang, originally built in 1828 as a place for the Crown Prince to study. Ongnyucheon is a brook at the back of the garden where there’s a huge rock Soyoam with three Chinese characters inscribed on it by King Injo in 1636 – ong-nyu-cheon, which means ‘jade flowing stream’ – and a poem composed in Chinese characters by King Sukjong in 1690.

Well worth joining are the monthly Moonlight Tours (April to May, and August to October), limited to 100 people and costing ₩30,000. Tickets can be bought online from Auction (www.ticket.auction.co.kr) or call 02-1566 1369 (English); book well in advance as it’s very popular.