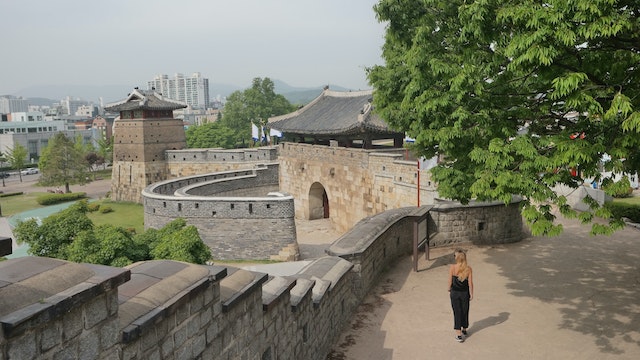 The World Heritage–listed fortress wall that encloses the original town of Suwon is what brings most travellers to the city. Snaking up and down Paldal-san (143m), the fortification wall stretches a scenic 5.7km past four majestic gates, command posts, pavilions, observation towers and fire-beacon platforms. Built by King Jeongjo and completed in 1796, it was constructed of earth and faced with large stone blocks and grey bricks, nearly all of which have been restored.

It takes around two hours to complete the circuit. Try to go outside the wall for at least part of the way, as the fortress looks much more impressive the way an enemy would see it.

Start at Paldalmun (팔달문), also known as Nammun (South Gate); the most iconic of Hwaseong's four main gates, it stands at the heart of the city on a busy roundabout. From here follow the steep steps off to the left up to the Seonam Gangu (서남각루, South-west Pavilion), an observation point near the peak of Paldal-san.

At the top of Paldal-san, near Seojangdae (서장대, Western Command Post), is the large Hyowon Bell which you can can pay to ring (three tolls for ₩1000) and Seonodae (서노대, West Crossbow Platform), an octagonal tower on the summit that was used by crossbow archers, and offers spectacular panoramic views of the city.

On the north edge of the fortress wall is Hwahongmun (화홍문), a water gate that bridges the Suwon-cheon gurgling beneath it. Nearby Dongbukgongsimdon (동북공심돈), the northeast observation tower, has a unique rounded, oval shape and stands three storeys tall (8m), with a spiral staircase threading the centre of the structure.

Further on, the Bongdon Beacon Towers (봉돈), a row of brick chimneys, were used to send messages and alerts around the country using a system of fire and smoke signals. They would have had a clear line of sight to Hwaseong Haenggung in order to alert the king of various threats.

If you don’t fancy the walk, head up the hill at the rear of the palace to the find the Hwaseong Trolley that winds in and out of the fortress wall to the archery field at Dongjangdae (동장대, East Command Post), also nicknamed Yeonmudae, a reference to its second function as a training camp. The grassy area was used as a sword and archery training ground for 200 years after the fortress opened.

Other notable structures in the fortress complex include Janganmun (장안문), the main north gate of Hwaseong and the largest gate of its kind in Korea. Visitors coming from Seoul would have entered the city here. It was reconstructed in the 1970s. The northwest watchtower Seobuk Gongsimdon (서북공심돈) stands guard next to Hwaseomun (화서문), the west gate, surrounded by its own fortress walls in miniature.

If you want to find out more about the fortress, including how detailed court records aided the 1970s reconstruction process, check out the Suwon Hwaseong Museum.

In August the fortress is illuminated with light shows at night.