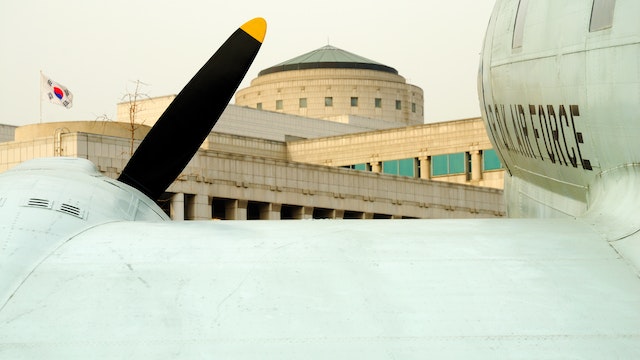 This huge museum documents the history of the Korean War (1950–53) using multimedia exhibits and black-and-white documentary footage, along with artefacts like weapons, uniforms, and maps. Outside, a sombre memorial walkway is inscribed with the names of every casualty from the allied forces. There are plenty of tanks, helicopters and planes too, and just to remind you that the war remains unresolved, you can clamber aboard a replica of the patrol boat sunk by North Korean forces in 2002.

Exhibits cover the surprise 4am attack from the North (spearheaded by 240 Russian-made tanks), the build-up of UN (mainly US) forces in Busan, the daring amphibious landing at Incheon, and the sweep north followed by the surprise Chinese attack – all of which took place in 1950.

On the 1st floor are paintings and panor­amic displays illustrating many fierce battles fought against invading Mongol, Japanese and Chinese armies. Many items are only vaguely dated, but there is a replica of one of Admiral Sun-sin’s famous iron-clad turtle warships (called geobukseon), which he used to defeat the Japanese navy in the 1590s.

Other displays cover Korea’s involvement in the Vietnam War (4700 Koreans died), North Korean attacks on the South since 1953, and Korea’s UN peacekeeping roles.

It takes around three hours to browse the whole place, so arrive before 3pm. There are free one-hour tours at 10am and 2pm daily.

There's also a children's museum outside, presenting the history of war in Korea with an introduction to national war heroes of old and a 'training ground' play area.