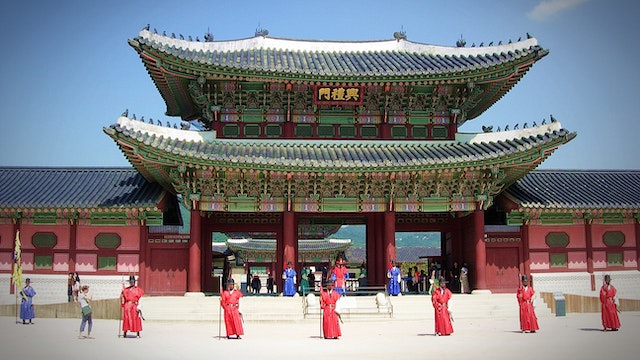 Like a phoenix, Seoul’s premier palace has risen several times from the ashes of destruction. Hordes of tourists have replaced the thousands of government officials, scholars, eunuchs, concubines, soldiers and servants who once lived here. Watch the changing of the guard ceremonies at the main entrance Gwanghwamun, then set aside at least half a day to do justice to the compound, which includes a couple of museums, ornamental gardens and some of Seoul's grandest architectural sights.

Originally built by King Taejo, the founder of the Joseon dynasty, Gyeongbokgung served as the principal palace until 1592, when it was burnt down during the Japanese invasions. It lay in ruins for nearly 300 years until Heungseon Daewongun, regent and father of King Gojong, started to rebuild it in 1865. King Gojong moved in during 1868, but the expensive rebuilding project virtually bankrupted the government.

Altogether the palace consisted of 330 buildings and had up to 3000 staff, including 140 eunuchs, all serving the royal family. During Japanese colonial rule, most of the palace was again destroyed – much of what you see today is accurate recent reconstructions.

Once beyond the landmark Gwanghwamun, flanked by a pair of protecting, giant haetae, mythical lion-like creatures, head straight for the flagstone courtyard fronting the ornate two-storey Geunjeongjeon, the main palace building. This highly impressive building, with its double-tiered stone platform and surrounding open-sided corridors, is where kings were crowned, met foreign envoys and conducted affairs of state.

West of Geunjeongjeon is the spectacular Gyeonghoeru, a large raised pavilion resting on 48 stone pillars and overlooking an artificial lake with two small islands. State banquets were held inside and kings went boating on the pond.

A series of smaller meeting halls precede the king’s living quarters, Gangyeongjeon, behind which are Gyotaejeon, the queen’s chambers. Behind that is a terraced garden, Amisan; the brick chimneys decorated with longevity symbols on the garden’s top terrace are to release the smoke from the palace's ondol (underfloor heating) system.

On the eastern side of the grounds is Donggun, the living quarters for the Crown Prince. To the rear, King Gojong built more halls for his own personal use and an ornamental pond with Hyangwonjeong, an attractive hexagonal pavilion on an island.

An audio commentary and a free guided tour (at 11am, 1.30pm and 3.30pm) are available if you wish to learn more about the palace. The popular two-hour Starlight Tour (₩50,000; 6.30pm and 7.40pm daily mid-March to mid-April) includes a 12-dish modern take on Korean royal court cuisine, with a visit to the royal kitchen, and an evening visit of 10 locations across the palace including the pavilion for a live performance of traditional Korean music. Tickets, available from early March, must be bought in advance online (www.ticket.auction.co.kr).