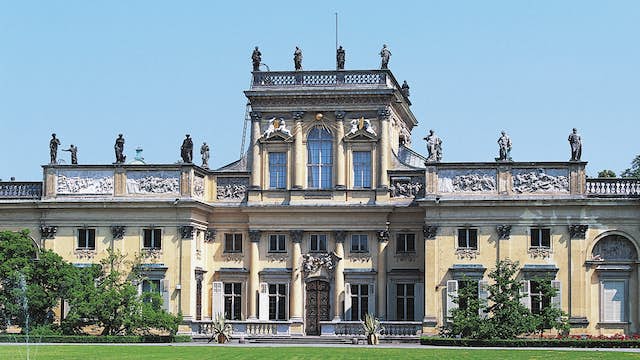 Warsaw’s top palace, 10km south of the city centre, was commissioned by King Jan III Sobieski in 1677. It has changed hands several times over the centuries, with each new owner adding a bit of baroque here and a touch of neoclassical there. Restoration of the palace's 2nd floor is underway until 2020, but in the meantime you can tour the magnificent ground-floor rooms packed with artistic baubles and treasures. Last entry to the palace is an hour before closing.

When King Jan III Sobieski decided this was the perfect spot for his country estate, there was already a village here called Milanów that had existed since the middle ages. The king renamed the village in Latin as 'Villa Nova', later Polonised into Wilanów (vee-lah-noof). Miraculously, Wilanów survived WWII almost unscathed, and most of its furnishings and art were retrieved and reinstalled after the war.

While restorations of the 2nd floor are underway you can follow two routes through the palace. Route 1 includes the White Hall, the palace's largest room, hung with portraits of successive owners of Wilanów; the Garden Galleries decorated with beautiful 17th-century frescoes; the Royal Apartments of King Jan III; the neoclassical-style Grand Vestibule; and the Potocki Museum, named after Stanisław Kostka Potocki, owner of Wilanów from 1799 to 1821, who in 1805 opened his art collection to the general public.

Route 2 covers Princess Marshall Lubomirska’s Apartments, an immaculately restored salon dating from the late 18th century and including the magnificent Chinese and Hunting Rooms. Also here is the Storage Accessible for Visitors, which allows a fascinating behind-the-scenes look at the restoration and care of the palace's collection of object d'art and antiques.