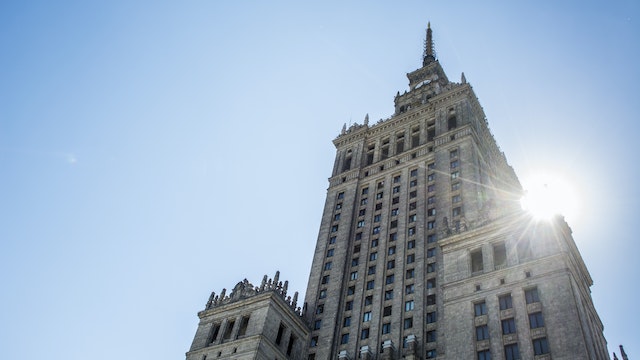 For over 60 years this socialist realist palace has dominated central Warsaw. A ‘gift of friendship’ from the Soviet Union, it was completed in 1955 and is, at 237m high, the tallest building in Poland – a title it will keep until the nearby 53-storey, 320m Varso Tower tops out in 2020. Among the many attractions at PKiN (as its full Polish name is abbreviated), the one not to be missed is the 30th-floor (115m) observation terrace.

To see some of PKiN's grand interior architecture, join the guided tour run by Creatours, whose booth is next to the ticket office for the observation terrace.

As its name indicates, PKiN is a vast recreation and educational facility. In different parts of the complex you'll find a huge congress hall (closed for renovation), three theatres, a multiscreen cinema, a handful of museums and other tourist attractions. You'll find Warsaw's main tourist office here, too

In the past locals branded PKiN with one uncomplimentary moniker after another – the 'Elephant in Lacy Underwear', a reference both to the building's size and the fussy sculptures that frill the parapets and terraces, was one favourite put down. More recently, though, PKiN has become accepted and even embraced as a city icon.