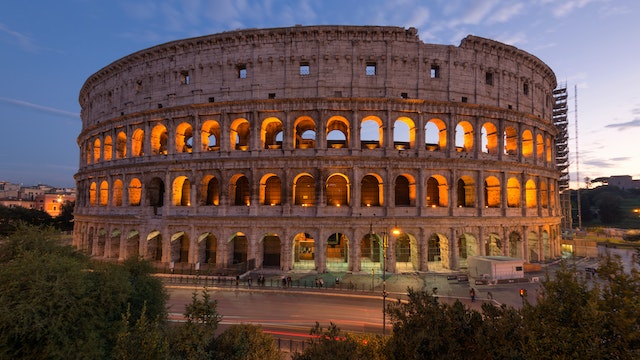 Everyone wants to see the Colosseum, and it doesn’t disappoint, especially if accompanied by tales of armored gladiators and hungry lions. More than any other monument, this iconic amphitheater symbolizes the power and drama of ancient Rome, and still today it’s an electrifying sight. Inaugurated in 80 CE, the 50,000-seat Colosseum, also known as the Flavian Amphitheatre, has survived in remarkably good shape. And it doesn’t take a huge leap of the imagination to picture it in its pomp, with its steeply stacked stands full of frenzied spectators as armored gladiators slug it out on the arena below.

After 2000 years, it's still Italy's top tourist attraction, drawing more than seven million visitors a year. To avoid the crowds, visit in the early morning or late afternoon. Consider booking tickets online, and make sure to get in the right entry line – the quickest are for those with pre-purchased tickets or passes.

The emperor Vespasian (r 69–79 CE) originally commissioned the amphitheater in 72 CE in the grounds of Nero's vast Domus Aurea complex. But he never lived to see it finished, and it was completed by his son and successor Titus (r 79–81) a year after his death. To mark its inauguration, Titus held games that lasted 100 days and nights, during which some 5000 animals were slaughtered. Trajan (r 98–117) later topped this, holding a marathon 117-day killing spree involving 9000 gladiators and 10,000 animals.

The arena was originally named the "Anfiteatro Flavio" after Vespasian's family (Flavian), and although it was Rome’s most fearsome arena, it wasn’t the biggest – the Circo Massimo could hold up to 250,000 people. The name "Colosseum," when introduced in medieval times, was not a reference to its size but to the Colosso di Nerone, a giant statue of Nero that stood nearby.

The outer walls have three levels of arches, framed by decorative columns topped by capitals of the Ionic (at the bottom), Doric and Corinthian (at the top) orders. They were originally covered in travertine and marble statues filled the niches on the second and third stories. The upper level, punctuated with windows and slender Corinthian pilasters, had supports for the 240 masts that held the awning over the arena, shielding the spectators from sun and rain. The 80 entrance arches, known as "vomitoria," allowed the spectators to enter and be seated in a matter of minutes.

The Colosseum's interior was divided into three parts: the arena, cavea and podium. The arena had a wooden floor covered in sand – "harena" in Latin, hence the word "arena" – to prevent the combatants from slipping and to soak up spilled blood. Trapdoors led down to underground chambers and passageways beneath the arena floor – the hypogeum (aka Sotterranei del Colosseo). Animals in cages and sets for the various battles were hoisted up to the arena by 80 winch-operated lifts. The cavea, for spectator seating, was divided into three tiers: magistrates and senior officials sat in the lowest tier, wealthy citizens in the middle and the plebs in the highest tier. Women (except for Vestal Virgins) were relegated to the cheapest sections at the top. The podium, a broad terrace in front of the tiers of seats, was reserved for emperors, senators and VIPs.

With the fall of the Roman Empire in the 5th century, the Colosseum was abandoned. In the Middle Ages it became a fortress occupied by the powerful Frangipani family. Later, it was plundered of its precious travertine, and marble stripped from it was used to decorate notable buildings such as Palazzo Venezia, Palazzo Barberini and Palazzo Cancelleria.

More recently, pollution and vibrations caused by traffic and the metro have taken a toll. To help counter this, it was given a major clean up between 2014 and 2016, the first in its 2000-year history, as part of an ongoing €25-million  ($30 million-plus) restoration project.

General admission tickets and tours can be purchased online for €16 ($19.21) plus a €2 ($2.40) booking fee. Valid for 24 hours, each ticket allows one entrance to the Colosseum and one entrance to the Forum-Palatine area. A ticket purchased on Friday can be used on Monday. You might also consider getting the Roma Pass or SUPER ticket.

If you don't want to buy a ticket online, and the lines on site are long, you can get your ticket at the Palatino.

The top three floors (known collectively as the "Terrazzo Belvedere") and hypogeum are accessible only by guided tour. These require advance booking and there is an additional charge on top of the normal Colosseum ticket. A guided tour of the Colosseum's main area can be booked for an additional fee as well.

Basic full-price admission tickets can be pre-printed; others (reduced/free/tours) must be picked up on-site. Print your ticket rather than relying on a saved smartphone version.

The Colosseum is open every day (except January 1 and December 25) from 8:30am to 4:30pm, with later closing hours during spring and summer.

Avoid the rip-off restaurants in the immediate vicinity. Instead push on to the area east of the Colosseum for a light casual meal at Cafè Cafè.

Alternatively, head up to Via Cavour where Cavour 313 is a good bet for a glass of wine accompanied by platters of cheese and cured meats.