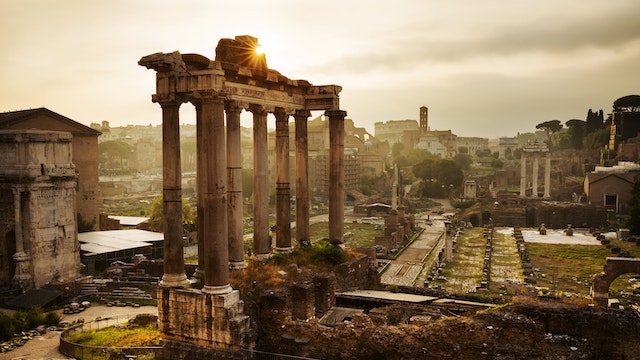 An impressive – if rather confusing – sprawl of ruins, the Roman Forum was ancient Rome's showpiece center, a grandiose district of temples, basilicas and vibrant public spaces. The site, originally a marshy burial ground, was first developed in the 7th century BCE,  growing over time to become the social, political and commercial hub of the Roman empire.

If you can get your imagination going, there’s something wonderfully compelling about walking in the footsteps of Julius Caesar and other legendary figures of Roman history. Signature sights include the Arco di Settimio Severo, the Curia, the Tempio di Saturno and the Arco di Tito.

The Roman Forum was the center of daily life in ancient Rome, the site of public gatherings, trials, elections and gladiatorial combat. Markets and shops lined the narrow alleys and streets. During the Roman Empire, the Forum became the site of the city's grandest monuments and temples.

Like many of ancient Rome's great urban developments, the Forum fell into disrepair after the fall of the Roman Empire until it was eventually used as pasture land. In the Middle Ages it was known as the Campo Vaccino (Cow Field) and extensively plundered for its stone and marble. The area was systematically excavated in the 18th and 19th centuries, and excavations continue to this day.

Via Sacra towards Campidoglio

Entering from Largo della Salara Vecchia – you can also enter directly from the Palatino or via an entrance near the Arco di Tito – you'll see the Tempio di Antonino e Faustina ahead to your left. Erected in 141 CE, this was transformed into a church in the 8th century, the Chiesa di San Lorenzo in Miranda. To your right, the 179 BCE Basilica Fulvia Aemilia was a 100m-long (328ft-long) public hall with a two-story porticoed facade.

At the end of the path, you'll come to Via Sacra, the Forum’s main thoroughfare, and the Tempio di Giulio Cesare (also known as the Tempio del Divo Giulio). Built by Augustus in 29 BCE, this marks the spot where Julius Caesar was cremated after his assassination in 44 BCE.

Heading right up Via Sacra brings you to the Curia, the original seat of the Roman Senate. This barn-like construction was rebuilt on various occasions before being converted into a church in the Middle Ages. What you see today is a 1937 reconstruction of how it looked in the reign of Diocletian (r 284–305).

In front of the Curia, and hidden by scaffolding, is the Lapis Niger, a large slab of black marble that's said to cover the tomb of Romulus.

At the end of Via Sacra, the 23m-high (75ft-high) Arco di Settimio Severo was built in 203 CE to commemorate the Roman victory over the Parthians. It is dedicated to the eponymous emperor and his two sons, Caracalla and Geta.

In front of the arch are the remains of the Rostri, an elaborate podium where Shakespeare had Mark Antony make his famous "Friends, Romans, countrymen…" speech. Facing this, the Colonna di Foca (Column of Phocus) rises above what was once the Forum's main square, Piazza del Foro.

The eight granite columns that rise behind the Colonna are all that remain of the Tempio di Saturno, an important temple that doubled as the state treasury. Behind it are (from north to south): the ruins of the Tempio della Concordia, the Tempio di Vespasiano, and the Portico degli Dei Consenti.

On the southern side of Piazza del Foro, you'll see the stubby ruins of the Basilica Giulia, which was begun by Julius Caesar and finished by Augustus. At the end of the basilica, three columns remain from the 5th-century BCE Tempio di Castore e Polluce.

Nearby, the 6th-century Chiesa di Santa Maria Antiqua is the oldest and most important Christian site on the forum. Its cavernous interior, reopened in 2016 after a lengthy restoration, is a treasure trove of early Christian art with exquisite 6th- to 9th-century frescoes and a hanging depiction of the Virgin Mary with child, one of the earliest icons in existence.

Accessible from the church is the Rampa di Domiziano, a vast underground passageway that allowed the emperors to access the forum from their Palatine palaces without being seen.

Via Sacra towards the Colosseum

Back towards Via Sacra is the Casa delle Vestali, home of the Vestal Virgins who tended the sacred flame in the adjoining Tempio di Vesta. The six virgin priestesses were selected from patrician families when aged between 6 and 10 to serve in the temple for 30 years. If the flame in the temple went out the priestess responsible would be flogged, and if she lost her virginity she would be buried alive. The offending man would be flogged to death.

Continuing up Via Sacra, past the circular Tempio di Romolo, you'll come to the Basilica di Massenzio, the largest building on the forum. Started by the Emperor Maxentius and finished by Constantine in 315, it originally measured approximately 100m (328ft) by 65m (213ft), roughly three times what it now covers.

Beyond the basilica, the Arco di Tito was built in 81 CE to celebrate Vespasian and Titus' victories against rebels in Jerusalem.

For a restorative coffee break, head up to the Campidoglio and the Terrazza Caffarelli, the Capitoline Museums' panoramic rooftop cafe.

If you want something more substantial, search out Terre e Domus, which serves excellent regional cuisine and fine local wines.

Tips for visiting the Roman Forum

1. Get grandstand views of the Forum from the Palatino and Campidoglio.

2. Visit first thing in the morning or late afternoon; crowds are worst between 11am and 2pm.

3. In summer it gets very hot and there’s little shade, so take a hat and plenty of water. Comfortable shoes are a must.

4. If you're caught short, there are toilets by the Chiesa di Santa Maria Antiqua.