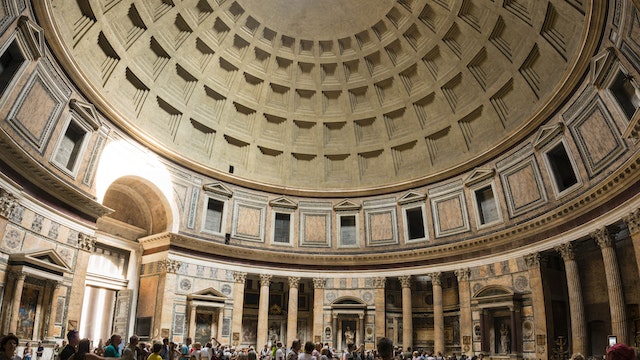 A striking 2000-year-old temple, now a church, the Pantheon is the best preserved of Rome’s ancient monuments and one of the most influential buildings in the Western world. Built by Hadrian over Marcus Agrippa’s earlier 27 BCE temple, it has stood since around 125 CE. And while its greying, pockmarked exterior might look its age, it's still a unique and exhilarating experience to pass through its vast bronze doors and gaze up at the largest unreinforced concrete dome ever built.

It’s vast, and you’ll feel very small as you look up at the record-breaking dome soaring above your head. Adding to the effect are the shafts of light that stream in through the central oculus (the circular opening at the dome’s apex), illuminating the royal tombs set into the marble-clad interior.

With its revolutionary design, this awe-inspiring temple has served as an architectural blueprint for millennia.

For centuries, the inscription under the pediment – “M:AGRIPPA.L.F.COS.TERTIUM.FECIT,” or “Marcus Agrippa, son of Lucius, in his third consulate built this” – led scholars to think that the current building was Agrippa's original temple. However, 19th-century excavations revealed traces of an earlier temple and historians realized that Hadrian had simply kept Agrippa's original inscription.

Hadrian's temple was dedicated to the classical gods – hence the name Pantheon, a derivation of the Greek words pan (all) and theos (god) – but in 608 CE, it was consecrated as a Christian church, and it's now officially known as the Basilica di Santa Maria ad Martyres.

Thanks to this consecration, it was spared the worst of the medieval plundering that reduced many of Rome's ancient buildings to near dereliction. But it didn't escape entirely unscathed – its gilded-bronze roof tiles were removed and bronze from the portico was used by Bernini for his baldachin at St Peter's Basilica. Its exterior is a massively imposing sight with 16 Corinthian columns, each 39ft (11.8m) high and each made from a single block of Egyptian granite, supporting a triangular pediment. Rivets and holes in the brickwork indicate where the original marble-veneer panels were removed.

During the Renaissance, the building was much studied – Brunelleschi used it as inspiration for his cupola in Florence – and it became an important burial chamber. In the cavernous marble-clad interior you'll find the tomb of the artist Raphael, alongside those of kings Vittorio Emanuele II and Umberto I.

Tips and other practicalities

Each Pentecost, tens of thousands of red petals are rained down on the Pantheon through the oculus. This centuries-old tradition represents the Holy Spirit descending to earth.

Tourist visits are not allowed during mass (from 5pm Saturday and from 10:30am Sunday). An audio guide costs €7 ($8.47). There is talk of an admission charge being levied in the future.

The streets around the Pantheon are thick with trattorias, cafes and bars. For an uplifting espresso, try the nearby La Casa del Caffè Tazza d’Oro, one of Rome's finest coffee houses.

On the other side of the Pantheon, Ginger is a contemporary all-day dining spot, good for sandwiches, burgers and full-on restaurant meals.