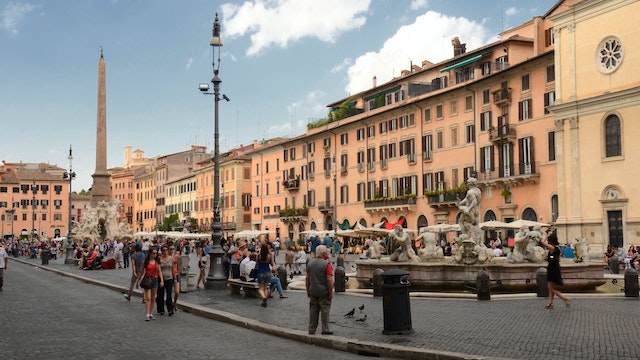 With its showy fountains, baroque palazzi and colorful cast of street artists, hawkers and tourists, Piazza Navona is central Rome’s elegant showcase square. Built over the 1st-century Stadio di Domiziano, it was paved over in the 15th century and for almost 300 years hosted the city's main market.

To catch the piazza at its most alluring, come first thing in the morning before the crowds arrive or after dark when the fountains are illuminated. Fill up with water at the nasone ("big nose") drinking fountain in the north of the piazza.

Another draw is the historic Christmas market staged in December, which traditionally runs until Jan. 6.

Its grand centerpiece is Bernini’s Fontana dei Quattro Fiumi, a flamboyant fountain featuring an Egyptian obelisk and muscular personifications of the rivers Nile, Ganges, Danube and Plate. According to legend, the Nile figure is shielding his eyes to avoid looking at the Chiesa di Sant’Agnese in Agone, designed by Bernini’s bitter rival Borromini. In truth, Bernini had completed his fountain two years before Borromini started work on the church's facade, and the gesture simply indicated that the source of the Nile was unknown at the time.

Other fountains include the Fontana del Moro, at the southern end of the square, which was designed by Giacomo della Porta in 1576. Bernini added the Moor in the mid-17th century, but the surrounding Tritons are 19th-century copies. And at the northern end of the piazza, the 19th-century Fontana del Nettuno depicts Neptune fighting with a sea monster, surrounded by sea nymphs.

In addition to the fountains, top sights here include the Chiesa di Sant’Agnese in Agone. With its theatrical facade and rich, domed interior, it is typical of Francesco Borromini’s baroque style. The church, which regularly hosts classical music concerts, is said to stand on the spot where the martyr Agnes performed a miracle before being killed. Legend has it that after being stripped naked by her executioners, her hair miraculously grew to cover her body and preserve her modesty.

Also worth noting is the Palazzo Pamphilj which was commissioned by Giovanni Battista Pamphilj to celebrate his election as Pope Innocent X. This elegant baroque palazzo was built between 1644 and 1650 by Borromini and Girolamo Rainaldi. Inside, there are some impressive frescoes by Pietro da Cortona, but the building, which has been the Brazilian Embassy since 1920, can only be visited on a pre-booked guided tour.

Like many of the city’s landmarks, the piazza sits atop an ancient monument, in this case the Stadio di Domiziano. This 30,000-seat stadium, whose subterranean remains can be accessed from Via di Tor Sanguigna, used to host athletic meets – hence the name Navona, a corruption of the Greek word "agon," meaning public games. Inevitably, though, it fell into disrepair and it wasn’t until the 15th century that the crumbling arena was paved over and Rome’s central market was transferred here from the Campidoglio.

Around Piazza Navona, Campo de’ Fiori and the Pantheon you’ll find all manner of places to eat, including some of the capital’s best restaurants (both contemporary and old-school), several excellent gelaterie and a number of highly rated street-food joints. Needless to say, there are also hundreds of overpriced tourist traps. To the south, the atmospheric Ghetto is the place to head to for traditional Roman-Jewish cuisine.

Housed in the ground floor of Palazzo Braschi at the southern end of the piazza, Vivi Bistrot is a charming spot for a lunchtime bite.

Another good option is Etablì, a cool bar-restaurant in the warren of streets west of the square.