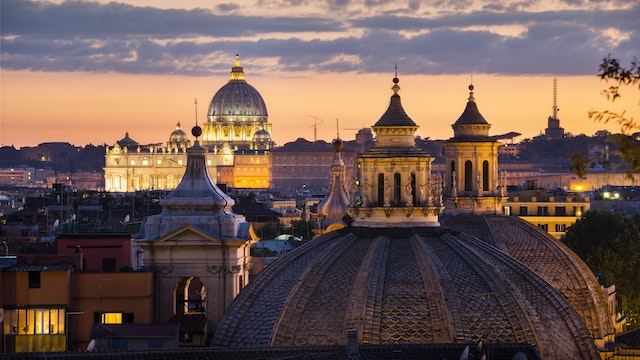 In the city of outstanding churches, none can hold a candle to St Peter's, Italy’s largest, richest and most spectacular basilica. Built atop a 4th-century church, it was consecrated in Rome in 1626 after 120 years of construction. Its lavish interior contains many spectacular works of art, including three of Italy's most celebrated masterpieces: Michelangelo’s Pietà, his soaring dome, and Bernini’s 95ft-high (29m) baldachin over the papal altar.

The cavernous 646 ft-long (187m) interior covers more than 3.7 acres (15,000 sq m). Michelangelo's hauntingly beautiful Pietà was sculpted when he was only 25, and it is the only work the artist ever signed – his signature is etched into the sash across the Madonna's breast. Nearby, a red floor disc marks the spot where Charlemagne and later Holy Roman Emperors were crowned by the pope.

Dominating the center of the basilica is Bernini's famous baldachin. Supported by four spiral columns and made with bronze taken from the Pantheon, it stands over the high altar, which itself sits on the site of St Peter's grave. The pope is the only priest permitted to serve at the altar.

Above, Michelangelo's dome soars to a height of 390ft (119m). Based on Brunelleschi's design for the Duomo in Florence, the towering cupola is supported by four stone piers named after the saints whose statues adorn the Bernini-designed niches – Longinus, Helena, Veronica and Andrew.

From the dome entrance on the right of the basilica's main portico, you can walk the 551 steps to the top or take a small elevator halfway and then follow on foot for the last 320 steps. Either way, it's a long, steep climb. But make it to the top, and you're rewarded with stunning rooftop views.

At the base of the Pier of St Longinus is Arnolfo di Cambio's much-loved 13th-century bronze statue of St Peter, whose right foot has been worn down by centuries of caresses.

Accessed from the left nave, the Museo Storico Artistico sparkles with sacred relics, including a tabernacle by Donatello and the 6th-century Crux Vaticana, a jewel-studded cross that was a gift of the emperor Justinian II. And extending beneath the basilica, the Vatican Grottoes contain the tombs and sarcophagi of numerous popes, as well as several huge columns from the original 4th-century basilica. The entrance is in the Pier of St Andrew.

Excavations beneath the basilica have uncovered part of the original church and what archaeologists believe is the Tomb of St Peter. In 1942, the bones of an elderly, strongly built man were found in a box hidden behind a wall covered by pilgrims' graffiti. And while the Vatican has never definitively claimed that the bones belong to St Peter, in 1968 Pope Paul VI said that they had been identified in a way that the Vatican considered "convincing."

The excavations can only be visited by guided tour. For further details, and to book a tour (this must be done well in advance), check out the website of the Ufficio Scavi.

The original church was commissioned by the emperor Constantine and built around 349 on the site where St Peter is said to have been buried between 64-67 CE. But like many medieval churches, it eventually fell into disrepair, and it wasn’t until the mid-15th century that efforts were made to restore it, first by Pope Nicholas V and then, rather more successfully, by Julius II.

In 1506 construction began on Bramante's design for a new basilica based on a Greek-cross plan, with four equal arms and a huge central dome. But on Bramante’s death in 1514, building ground to a halt as architects, including Raphael and Antonio da Sangallo, tried to modify his original plans. Little progress was made, and it wasn’t until Michelangelo took over in 1547 at the age of 72 that the situation changed.

Michelangelo simplified Bramante’s plans and drew up designs for what was to become his greatest architectural achievement, the dome. He never lived to see it built, though, and it was left to Giacomo della Porta and Domenico Fontana to finish it in 1590.

With the dome in place, Carlo Maderno inherited the project in 1605. He designed the monumental facade and lengthened the nave towards the piazza.

Built between 1608 and 1612, Carlo Maderno’s immense facade is 157 ft (48m) high and 377 ft (115m) wide. Eight 89-ft high (27m) columns support the upper attic on which 13 statues stand representing Christ the Redeemer, St John the Baptist and the 11 apostles. The central balcony is known as the Loggia della Benedizione, and it’s from here that the pope delivers his "Urbi et Orbi" blessing at Christmas and Easter.

Expect lines and note that strict dress codes are enforced (no shorts, miniskirts or bare shoulders).

Free two-hour, English-language tours of the basilica are run by seminarians from the Pontifical North American College between October and May. These generally start at 2:15 pm Wednesday, Thursday and Friday, leaving from the Centro Servizi Pellegrini e Turisti (no tickets necessary; check online for details).