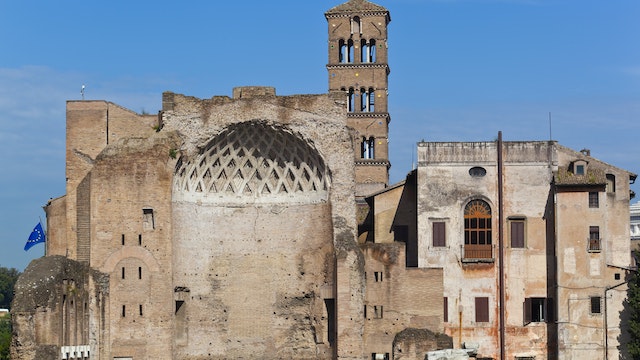 Sandwiched between the Roman Forum and the Circo Massimo, the Palatino (Palatine Hill) is one of Rome's most spectacular sights. It's a beautiful, atmospheric spot, complete with towering pine trees, majestic ruins and unforgettable views. This is where Romulus supposedly founded the city in 753 BCE, and Rome's emperors lived in palatial luxury. Look out for the stadio (stadium), the ruins of the Domus Flavia (imperial palace), and grandstand views over the Roman Forum from the viewing balcony in the Orti Farnesiani.

Rome’s mythical founders, twin brothers Romulus and Remus, were supposedly brought up on the Palatino by a shepherd, Faustulus, after a wolf saved them from death. Their shelter, the 8th century BCE Capanne Romulee (Romulean Huts), is situated near the Casa di Augusto.

In 2007 the discovery of a mosaic-covered cave 15m (49ft) beneath the Domus Augustana reignited interest in the legend. According to some scholars, this was the "Lupercale," the cave where ancient Romans thought Romulus and Remus had been suckled by the wolf.

Roman myth holds that Romulus established Rome on the Palatino after he killed Remus in a fit of rage. Archaeological evidence, however, puts the establishment of a village here to the early Iron Age (around 830 BCE).

As the most central of Rome's seven hills, and because it was close to the Roman Forum, the Palatino was the ancient city's most exclusive neighborhood. The emperor Augustus lived here all his life, and successive emperors built increasingly opulent palaces – in fact, the word "palace" is derived from the hill's Latin name, "Palatium." But after Rome's decline, the area fell into disrepair, and in the Middle Ages churches and castles were built over the ruins. During the Renaissance, members of wealthy families had landscaped gardens laid out on the site.

Most of the Palatino as it appears today is covered by the ruins of Emperor Domitian's vast complex, which served as the main imperial palace for 300 years. Divided into the Domus Flavia, Domus Augustana, and a stadio, it was built in the 1st century CE.

On entering the complex from the main entrance on Via di San Gregorio, continue left until you come to a gate giving onto a path (open 9am to 3pm). This skirts the hill's southern flank, offering good views up to the ruins and providing a clear chronology of the Palatino's development – as you walk, you're essentially going back in time as the ruins become increasingly older.

Back on the main site, the first recognizable construction you come to is the stadio. This sunken area, which was part of the main imperial palace, was probably used by the emperors for private games and events. A path to the side of it leads to the towering remains of a complex built by Septimius Severus, comprising baths and a palace. Here you can enjoy sweeping views over the Circo Massimo and, if they're open, visit the Arcate Severiane, a series of arches built to facilitate further development.

On the other side of the stadio are the ruins of the huge Domus Augustana, the emperor's private quarters in the imperial palace. This was built on two levels, with rooms leading off a peristilio (peristyle or porticoed courtyard) on each floor. You can't get down to the lower level, but from above you can see the basin of a big, square fountain and beyond it rooms that would originally have been paved in colored marble. Also here are the Aula Isiaca and Loggia Mattei, two of several sites accessible with a SUPER ticket. The former is a frescoed room from a luxurious Republican-era house, while the latter is a Renaissance loggia decorated by Baldassarre Peruzzi.

The white building next to the Domus Augustana is the Museo Palatino, a small museum which charts the development of the Palatino with video presentations, models and archaeological finds.

North of the museum is the Domus Flavia, the public part of the palace complex. This was centered on a grand columned peristyle – the grassy area you see with the base of an octagonal fountain – off which the main halls led. To the north was the emperor's audience chamber (aula Regia); to the west, a basilica where the emperor judged legal disputes; and to the south, a large banquet hall, the triclinium.

Near the Domus, the Casa di Livia is one of the Palatino's best preserved buildings. Home to Augustus' wife Livia, it was built around an atrium leading onto what were once reception rooms decorated with frescoes of mythological scenes, landscapes, fruits and flowers. Nearby, the Casa di Augusto, Augustus' private residence, features some superb frescoes in vivid reds, yellows and blues.

Near to the Casa di Augusto, but closed off to visitors, are the Capanne Romulee, where it's thought Romulus and Remus were brought up by a local shepherd named Faustulus.

Northeast of the Casa di Livia lies the Criptoportico Neroniano, a 130m (427ft) tunnel where Caligula was thought to have been murdered, and which Nero later used to connect his Domus Aurea with the Palatino.

The area west of this was once Tiberius' palace, the Domus Tiberiana, but is now home to the 16th century Orti Farnesiani, one of Europe's earliest botanical gardens. A viewing balcony at the northern end of the garden commands breathtaking views over the Roman Forum.

Access to the Casa di Livia and Casa di Augusto requires the SUPER ticket and is by guided tour only. The ticket, valid for two consecutive days, covers the Colosseum, Roman Forum and Palatino. Numbers are limited, so it's best to book an entry time when you buy your ticket.